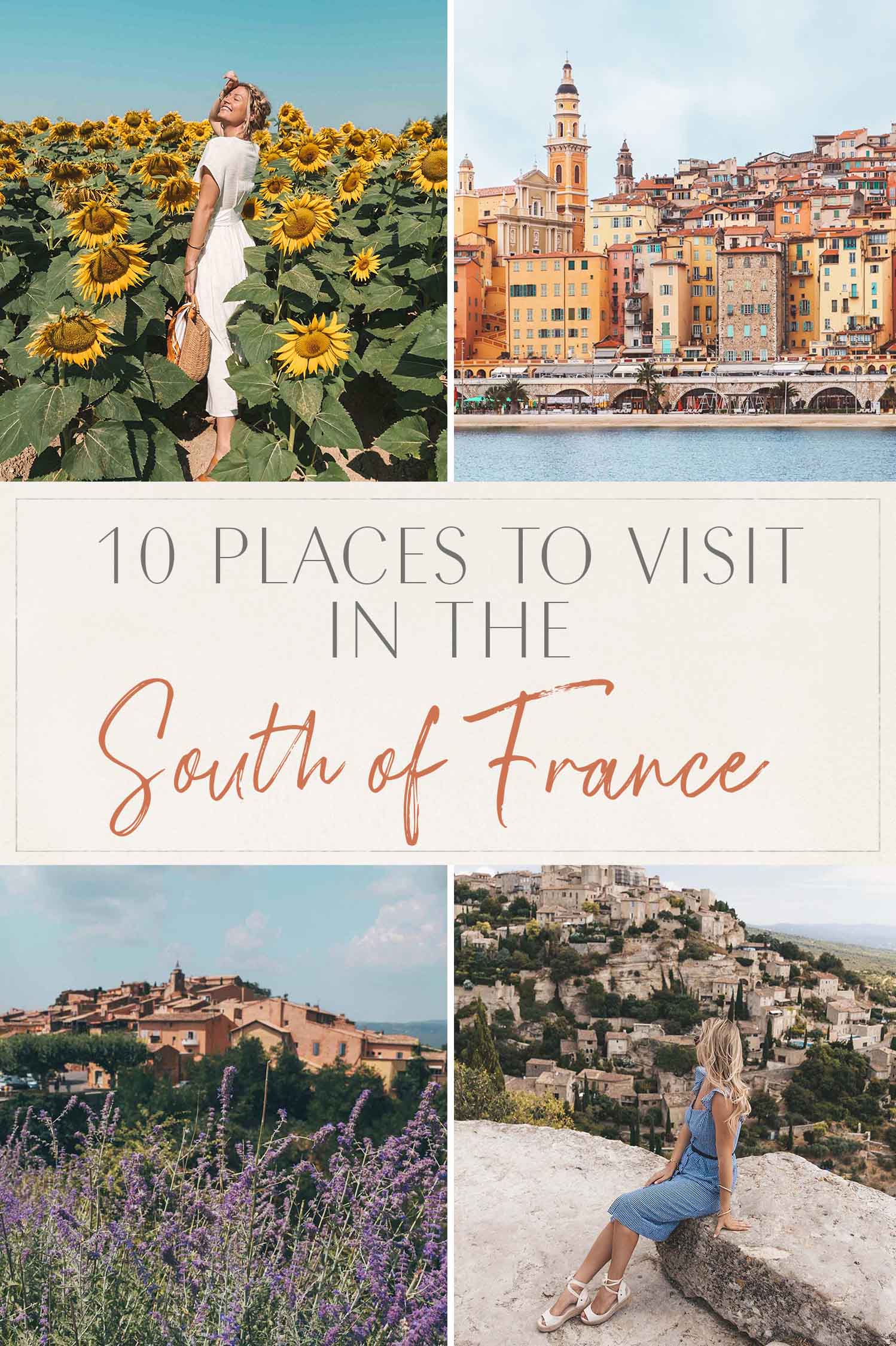 The South of France has a reputation for being a glamorous, lush, and tropical destination — and that’s because it’s true!

Whether you’re a seasoned traveler or this is your first-ever trip to France, you’ll definitely love a vacation spent exploring this region of the country. You’ll be able to experience luxurious retreats, culinary masterpieces, and a truly unmatched stretch of coastline.

Not sure which cities to visit in the South of France or looking for some of the top things to do in the region? I’ve got you covered. 🙂

Here are ten of the best places you should visit during your time in the South of France. 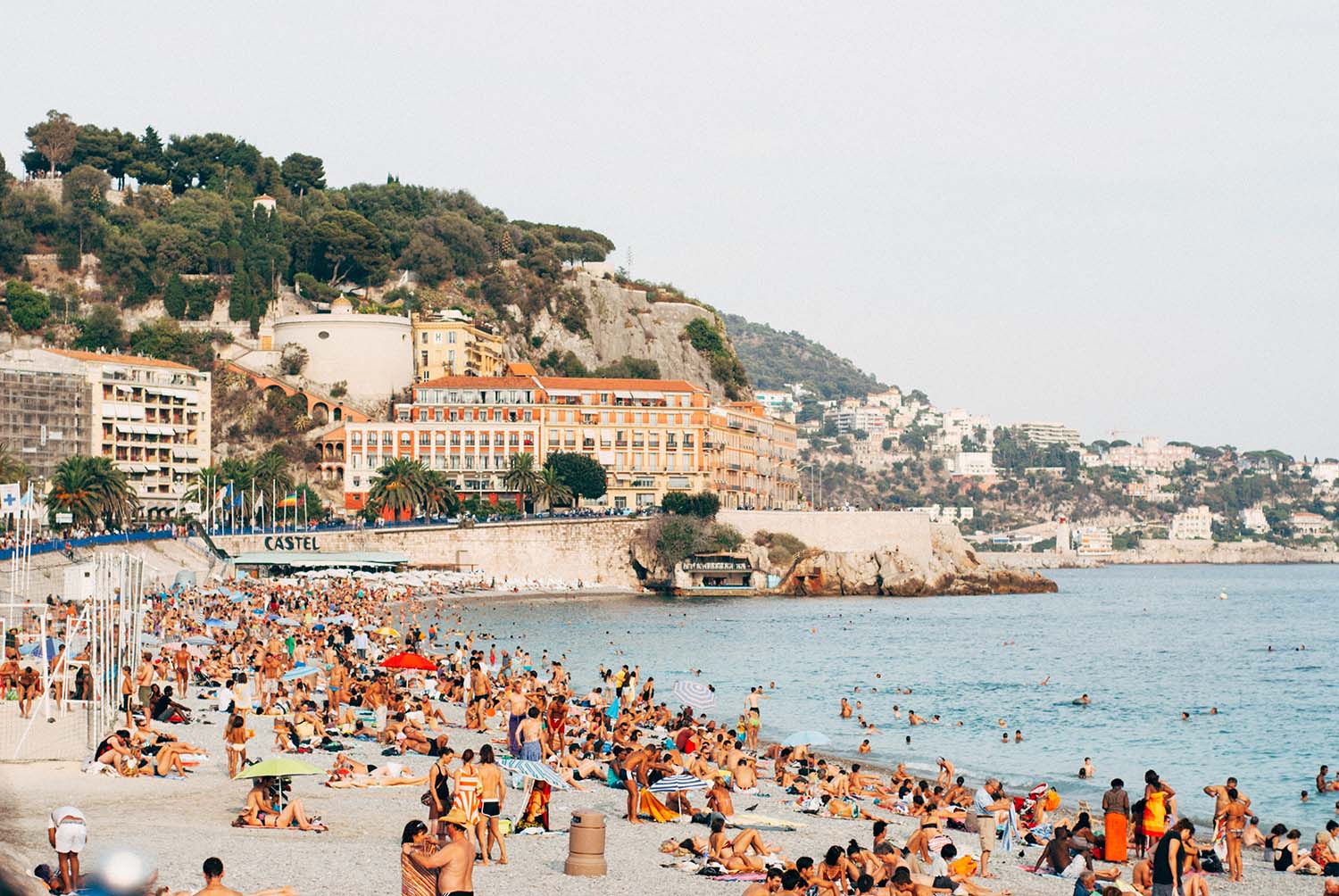 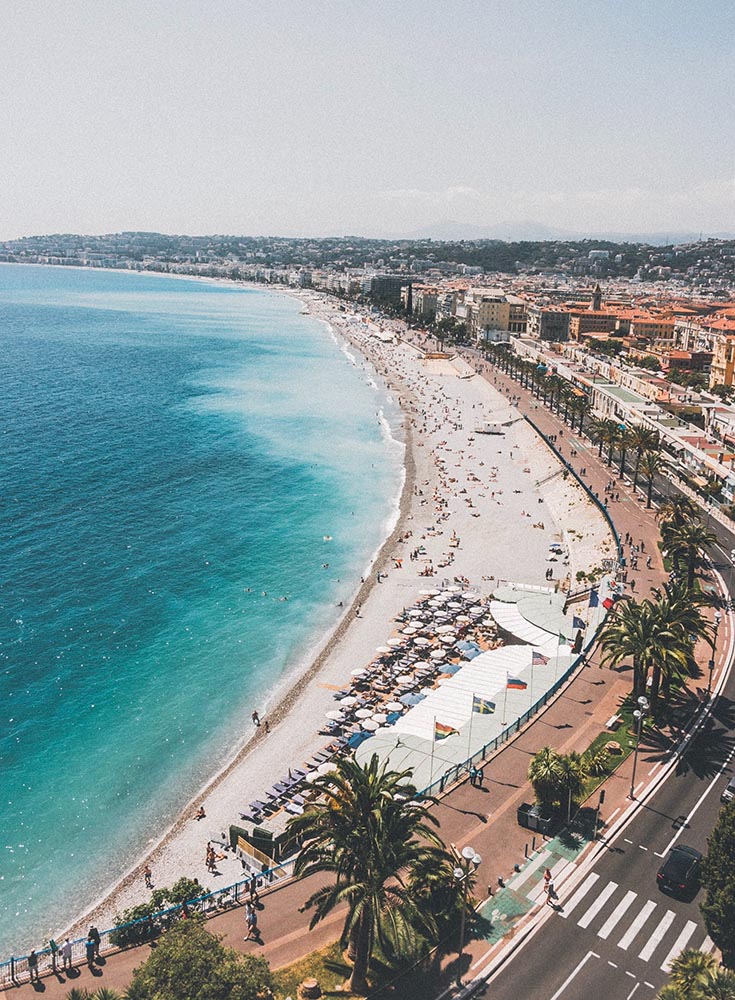 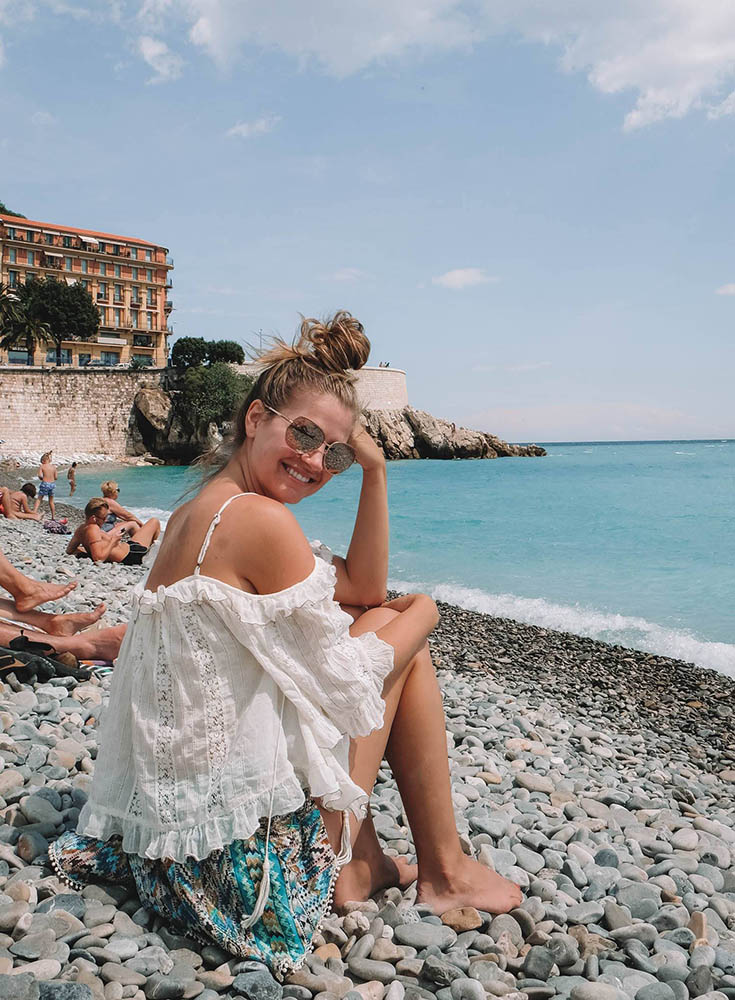 Located on the charming French Riviera, the city of a weekend in Nice makes for the perfect getaway. It’s sunny, beachy, and filled with unique eateries and lively bars.

Nice is also less costly than some of the more famous coastal destinations in the south of France like St. Tropez, but that doesn’t mean you aren’t getting a world-class experience.

Take a day trip to Grasse, located just an hour away from Nice’s city center by car.

Grasse is the perfume capital of the world and you can make your own signature scent at one of the town’s many perfumeries. The May rose cultivated in Grasse is the heart of famous perfumes such as the iconic Chanel No. 5, which is probably the most famous perfume in the world.

Bonus: Nestled in between Nice and Cannes is Antibes, and it’s SPECTACULAR.

Truly, the whole Côte d’Azur shouldn’t be missed…so I’ll share a bit more about some of the highlights below! 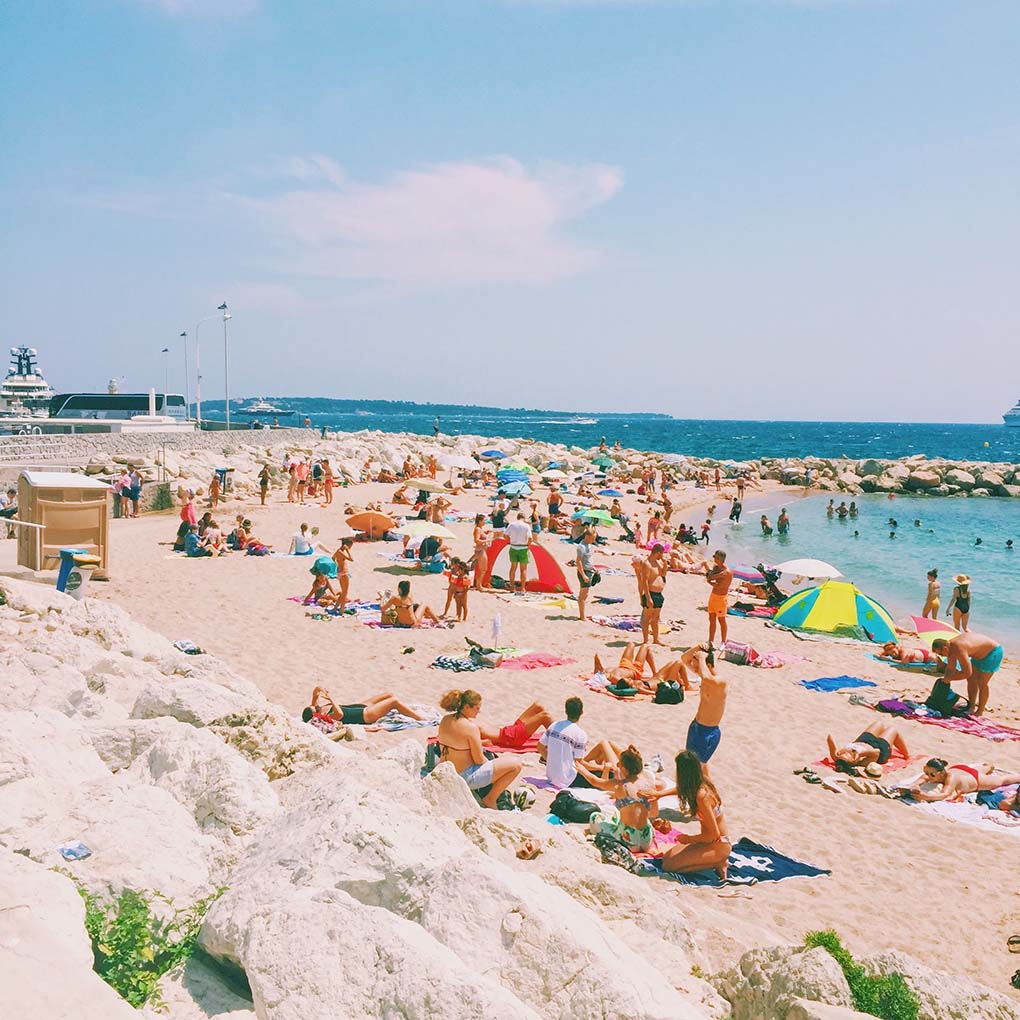 Cannes is perhaps best known for being the location of the Cannes Film Festival which has taken place annually since 1946.

It’s also known for being a glamorous spot that attracts the rich and famous — but there’s no rule that you can’t go and experience a slice of this luxurious destination yourself!

Make sure you take time to walk along the Promenade de la Croisette, a boulevard that borders the Mediterranean Sea. It’s lined with designer stores, fancy restaurants, and amazing hotels. 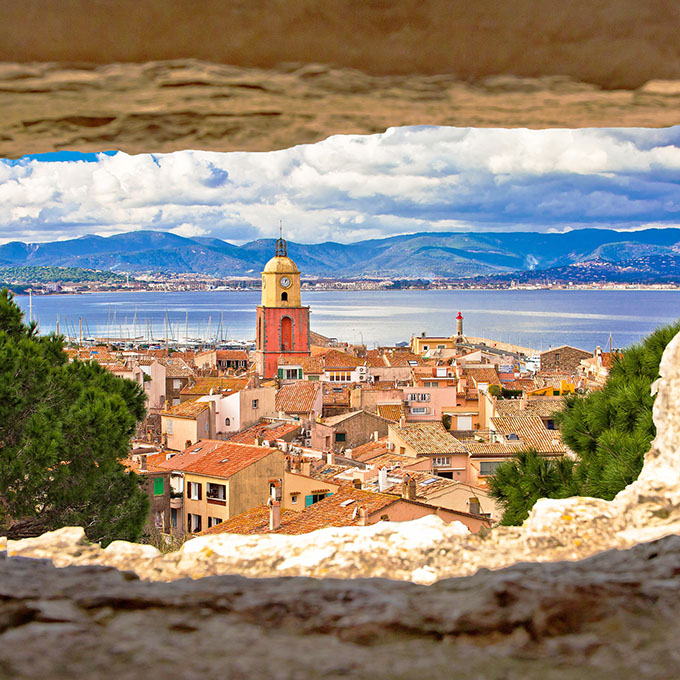 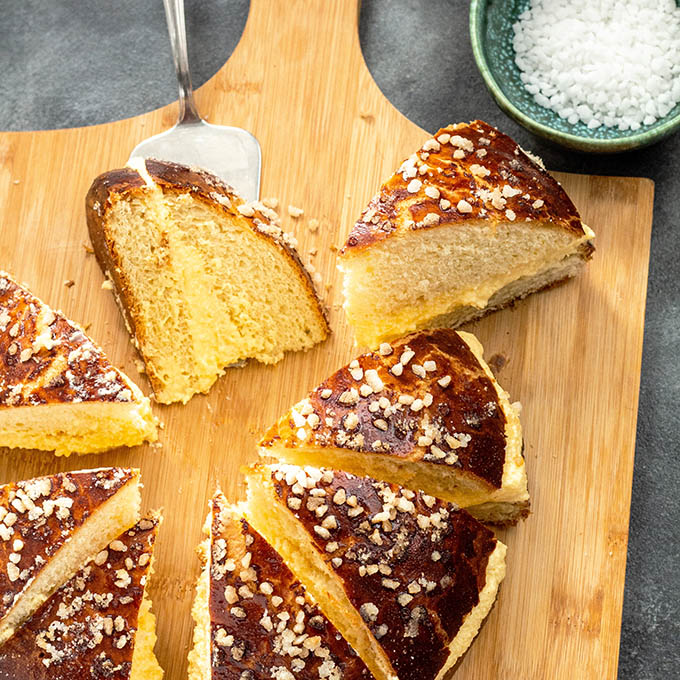 One of the top things to do in the South of France is the beaches, hands down.

If you’re brainstorming the best places to go in the South of France, it’s hard to avoid St. Tropez. And you shouldn’t — it’s really the beautiful and luxurious place everyone says it is! Defined by its incredible coastline, delicious cuisine, and some incredible wine, St. Tropez is also a top destination to visit in the summer.

Make sure you try Tarte tropézienne, a sweet pastry that was named by actress Brigitte Bardot during the filming of And God Created Woman, which took place in St. Tropez. 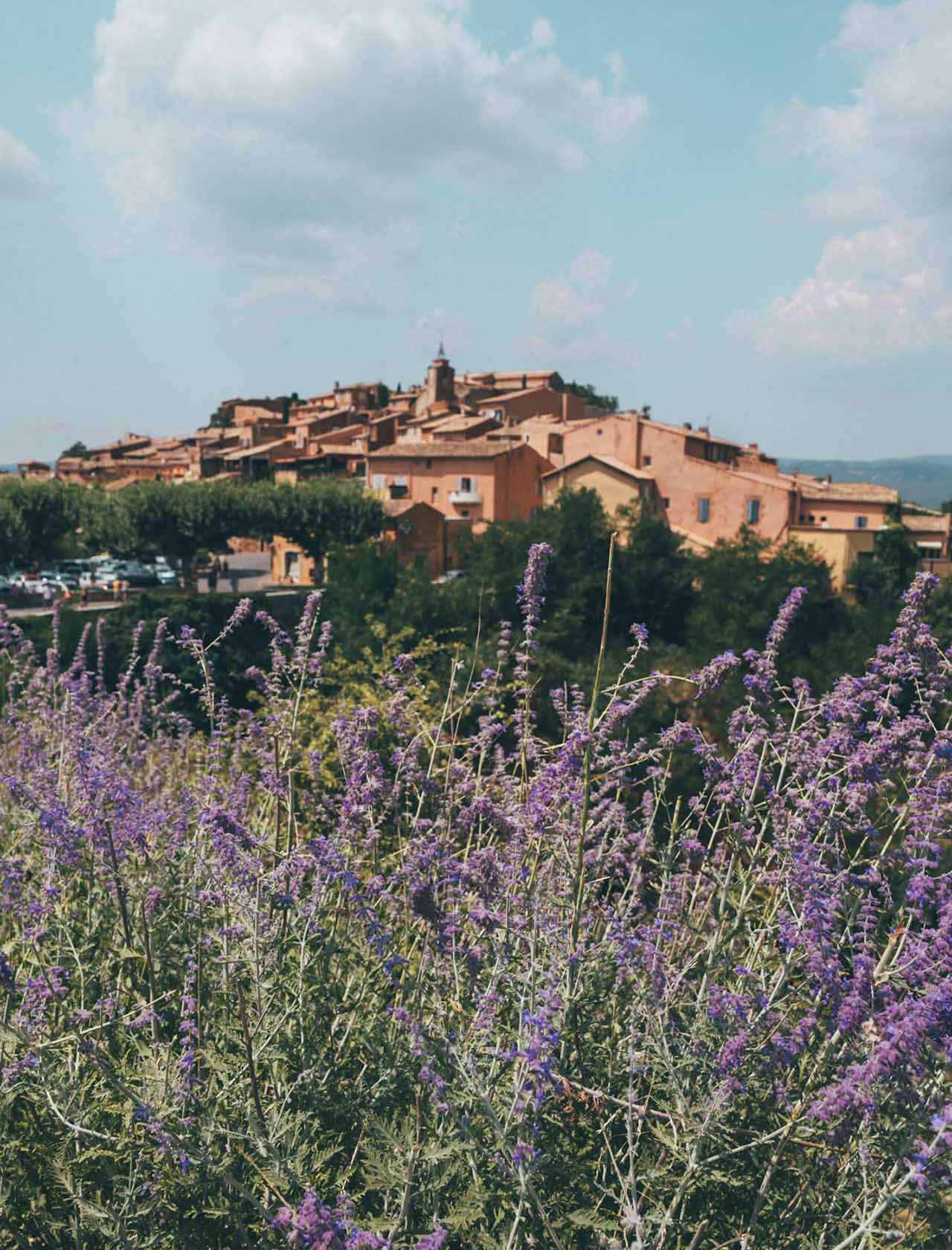 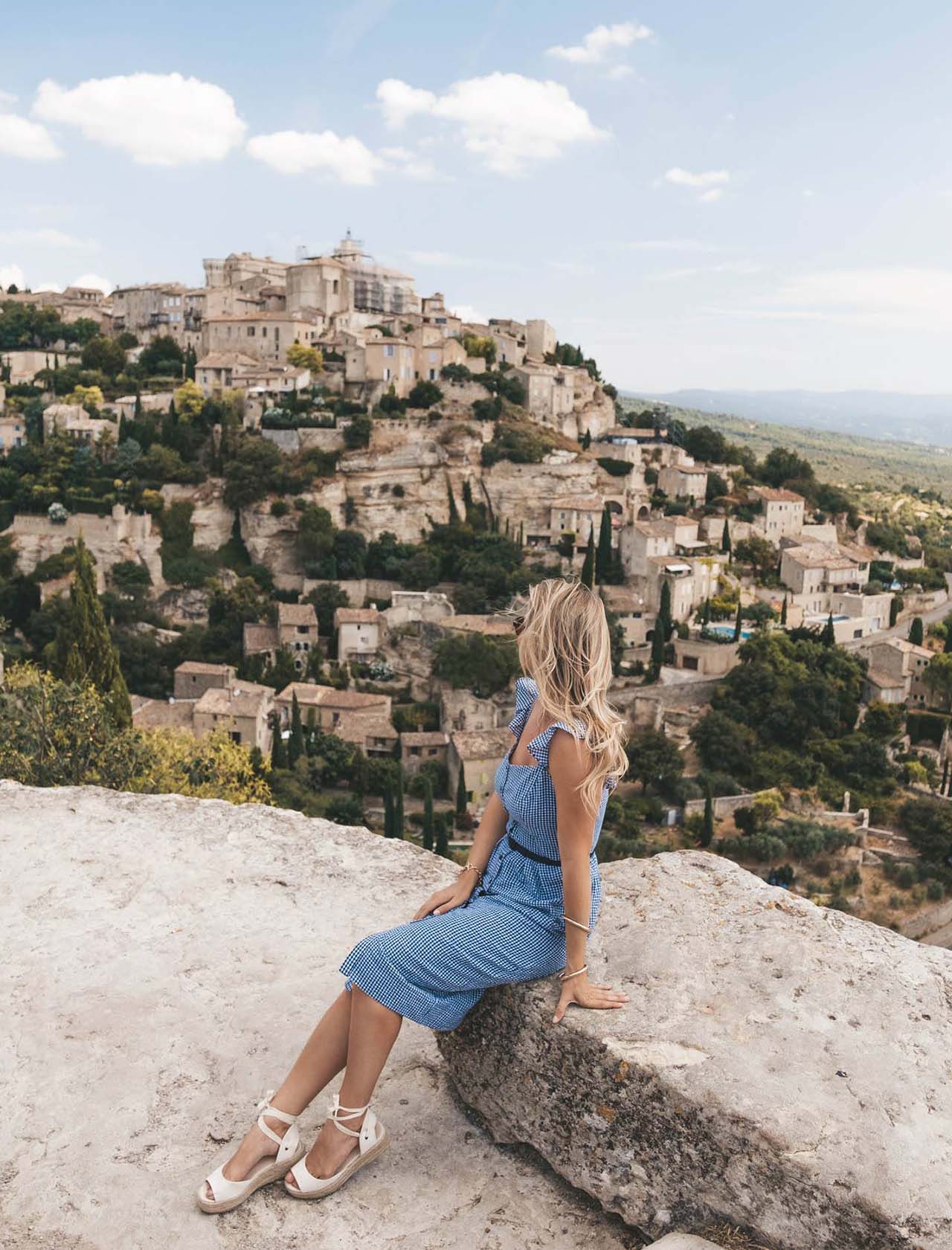 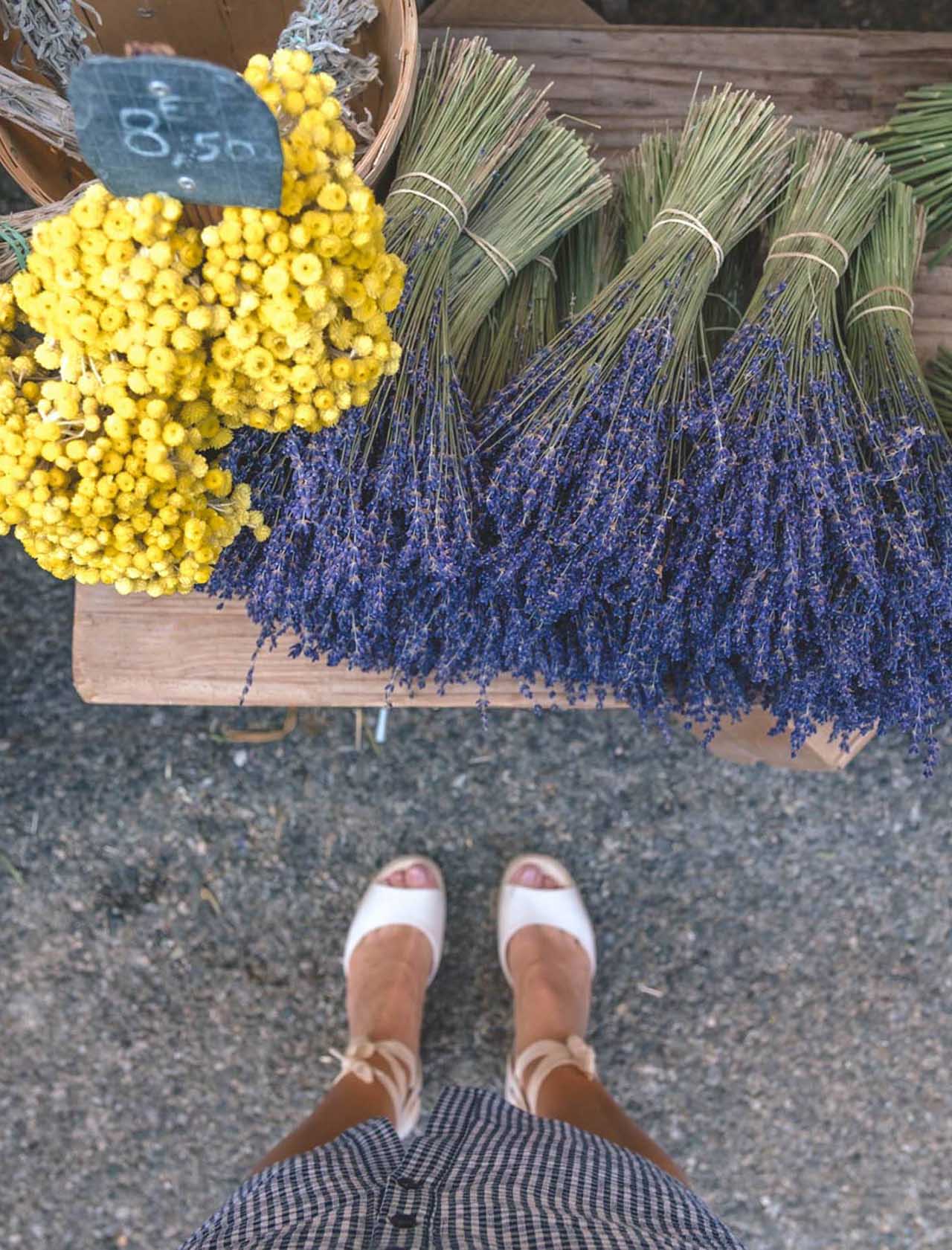 You’re spoiled for choice on where to go in the South of France — the whole region of Provence is ripe for exploring!

To experience the region properly, consider renting a car in Provence and exploring the charming villages and countryside that make up this beautiful region in the south of France. The colorful landscape is covered with lavender fields, vineyards, and bright blue pockets of water.

Sault is one of the most charming villages in Provence and is a great home base for exploring the lavender fields in the region.

You can rent a bike and explore the village and the area that surrounds it. The drive into Sault is a challenge with sharp turns and narrow roads so just make sure you plan to travel during the day so you have the benefit of sunlight to make it a bit easier.

Another highlight is the village of Gordes, specifically the farmer’s market that takes place every Tuesday. It’s a great place to shop for local cheese, lavender, charcuterie, soaps, and more.

Roussillon is equally charming — sitting pretty on a picturesque hillside! It’s home to charming cafes, markets, and galleries. With hues of orange, yellow, and reds to match the nearby ochre mines, it’s a must-see stop on a road trip through the Provence region. 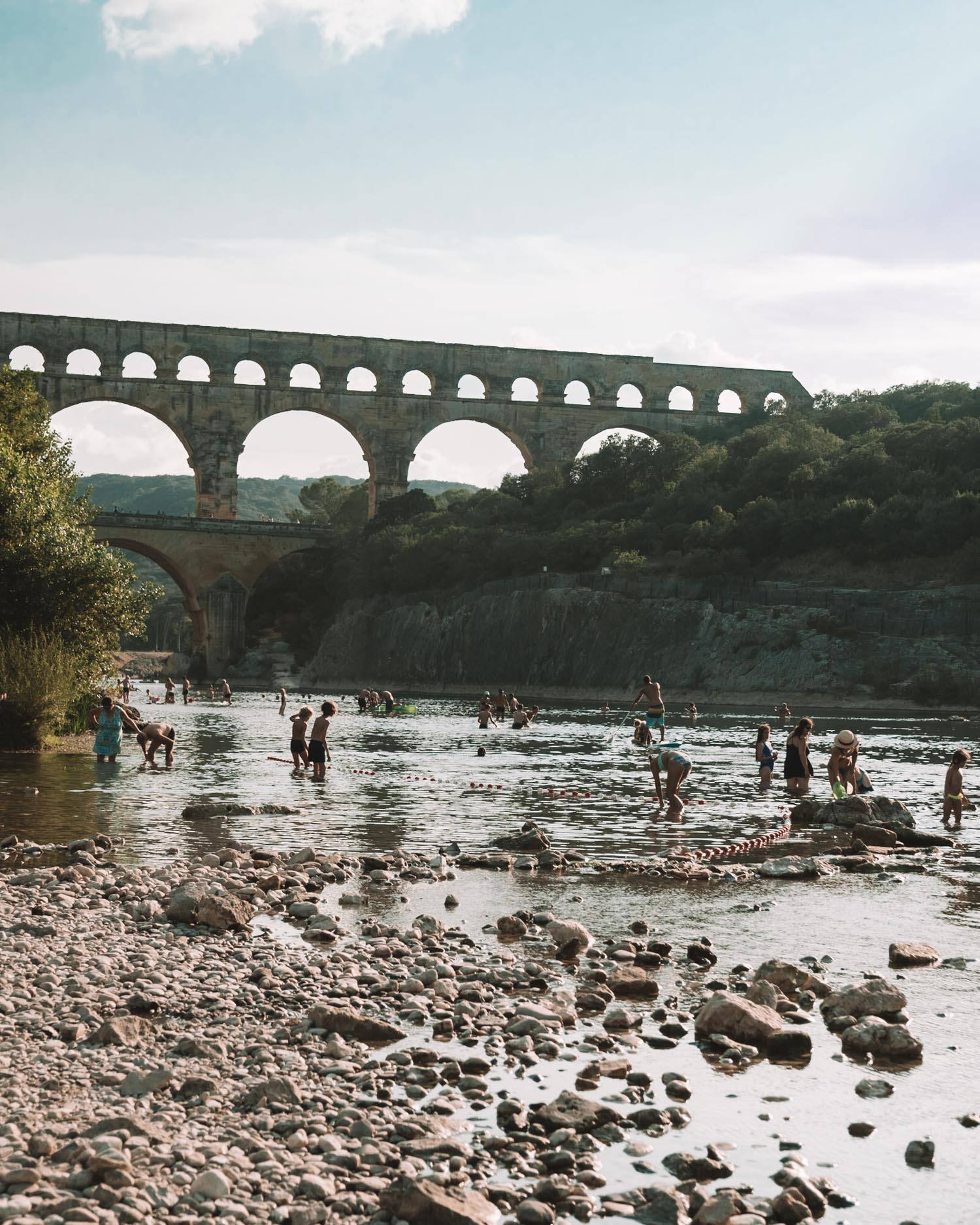 When I traveled through Provence, I decided to base myself in the medieval city of Avignon. Its old town is a UNESCO World Heritage Site and staying here felt like I was transported back in time.

The city’s Palais des Papes is the largest Gothic fortress in the world. It boasts that classic French fairytale allure, and it’s easy to imagine the building’s history of rebellion playing out as you wander through the halls.

While you’re in Avignon, you’ll absolutely want to visit the Pont Du Gard Aqueduct, which is about a 30-minute drive from Avignon.

Built in the 1st century AD, the Pont de Gard is one of the best-preserved Roman constructions on earth. It’s also a UNESCO world heritage site.

Pack a swimsuit, pick up a few groceries for a picnic dinner, and drive out to the Pont Du Gard aqueduct for sunset.

Fun Fact: It’s the most visited ancient monument in France. Plus, it’s only €8.50 per adult to visit and includes parking.

After crossing the bridge, find a spot to set up your picnic. Enjoy a glass of wine and a swim as the sun sets over Avignon. It’s truly a unique sight that you can’t find anywhere else.

As you drive back to Avignon, pull over just outside of the city walls and catch a glimpse of the fortified city at night. The Palais de Papes is also something to marvel at after dark.

If you’re up for it, grab a glass of wine, and people watch near the palace. There’s usually something always going on in the center of town that you won’t want to miss. 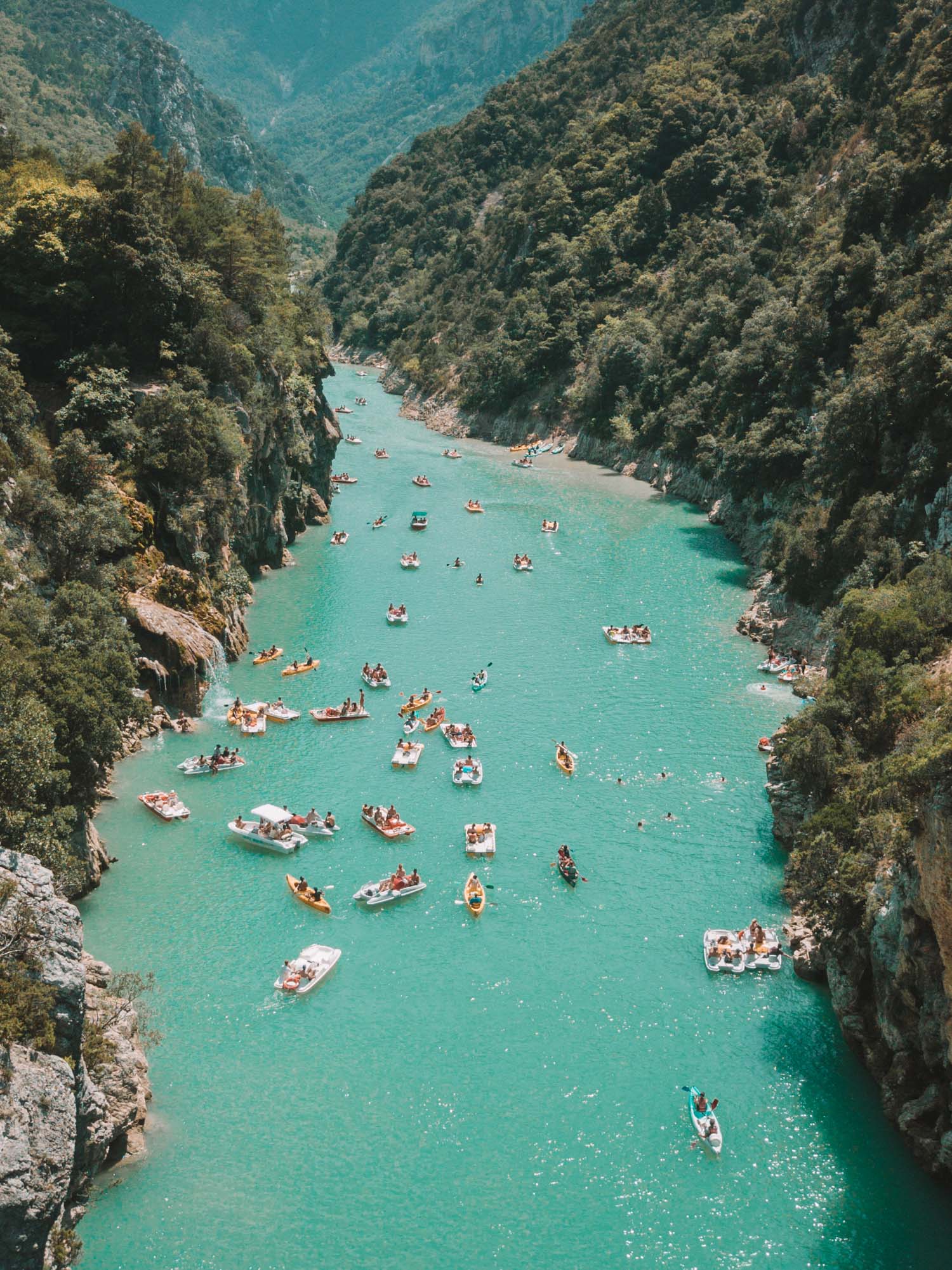 One of the most beautiful places in the south of France, the Verdon Gorge, is a dramatic series of limestone cliffs that create the deepest gorge in the country.

It’s an amazing place to spend time outdoors and there are opportunities to hike, take photographs, kayak, and even rock climb if you’re looking for a thrill!

You can find a handful of businesses that rent the supplies you need for any of these activities so don’t worry about packing equipment in your suitcase. 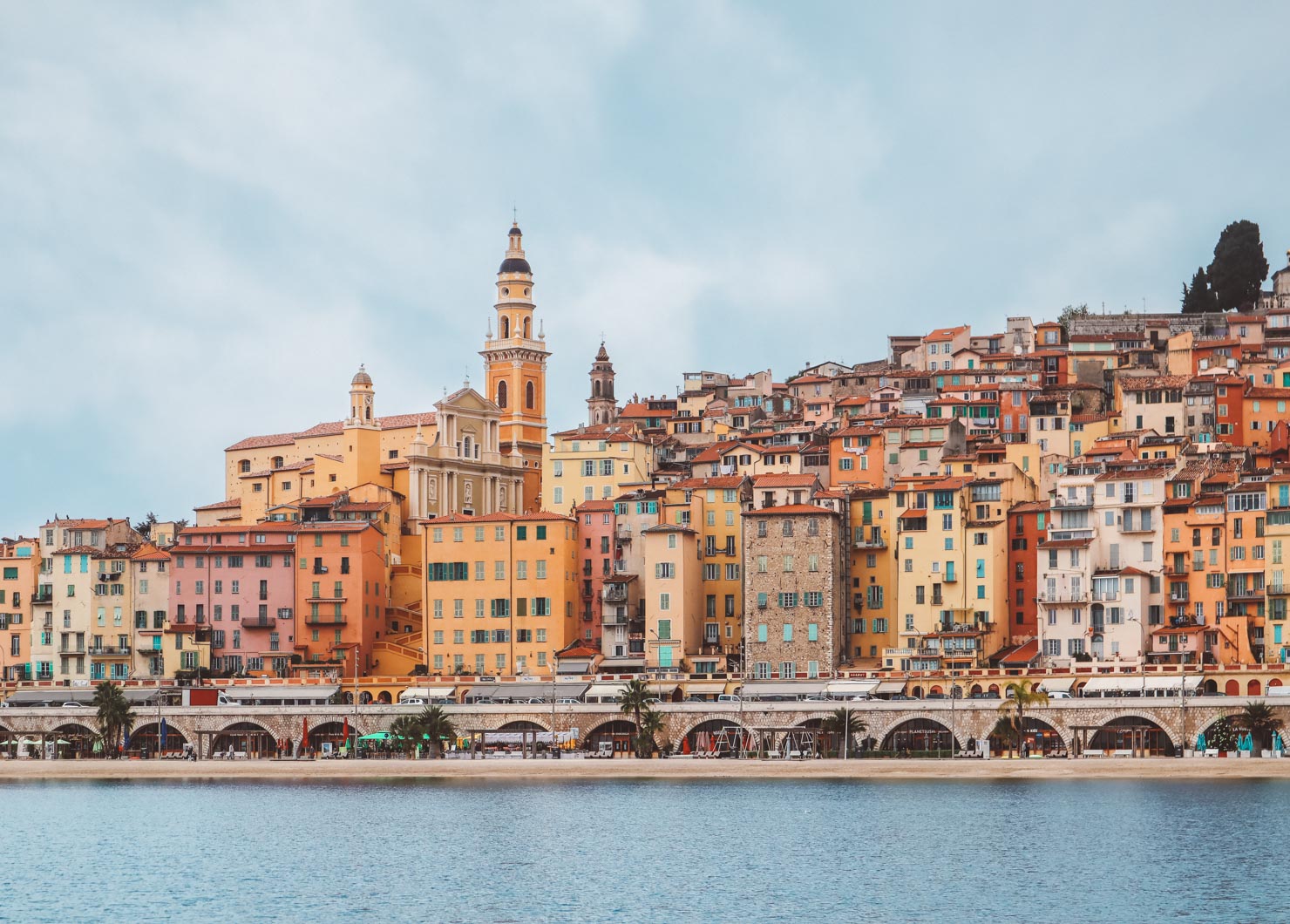 One of the best-kept secrets in the south of France, Menton sees more sun than most other places in the country. From the 13th century to the French Revolution, Menton was ruled by Monaco’s Grimaldi family — the same Grimaldi family that Grace Kelly married into in 1956!

Menton has long been a tourist destination thanks to its grand mansions and lush gardens.

If you can, take the opportunity to dine at Mirazur, a restaurant known not only for its fresh and artistic cuisine but also for being seemingly impossible to get a reservation at. The menu changes to reflect the changing seasons as they prefer to use the best seasonal ingredients.

They offer reservations on their website by meal type and are often booked months in advance…so plan ahead!

Bonus: Nestled in between Nice and Menton in Monaco if you’re looking to spend a few days exploring the playground of the rich and famous.

France’s oldest city, Marseille, is known for its gorgeous architecture that contrasts beautifully against the bright blue waters of the Mediterranean.

It’s a beautiful and surprising destination that’s nothing like the other places in France I’m used to, and after spending 48 hours in Marseille, I’m convinced it’s one of the best places in France to visit. It’s rich with culture and history, and you also get to experience some amazing coastal weather.

If you’re looking for a culinary recommendation, make sure you try bouillabaisse!

It’s a fish stew that was created in Marseille and has long been a favorite dish of locals and visitors alike. You can find it throughout the city — each restaurant has its own unique spin on the classic meal. 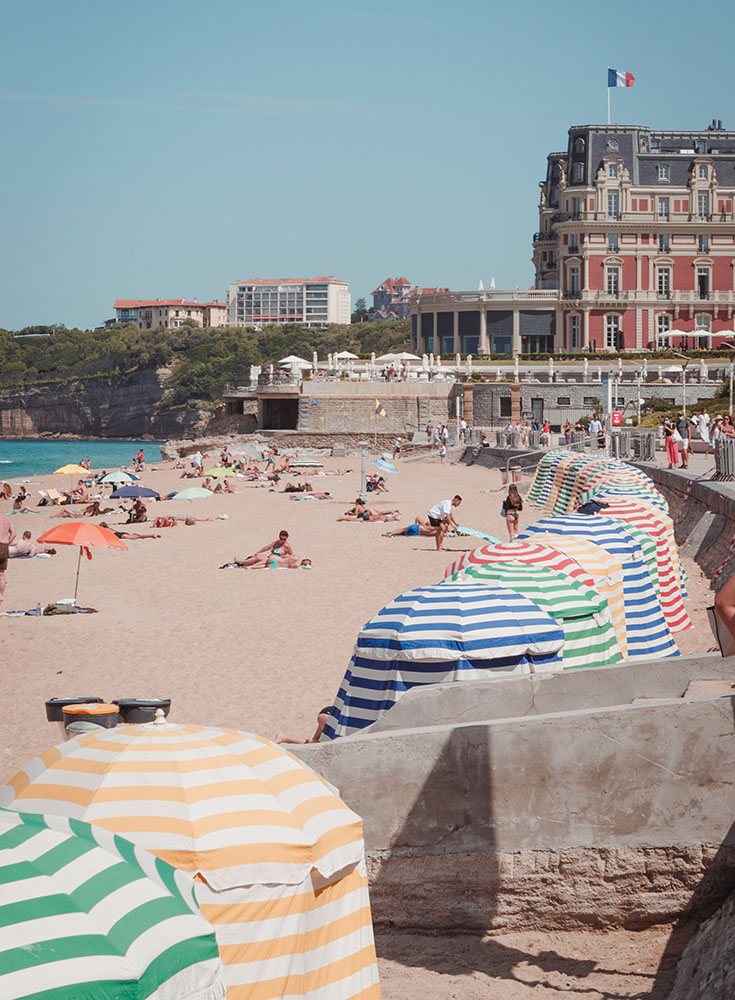 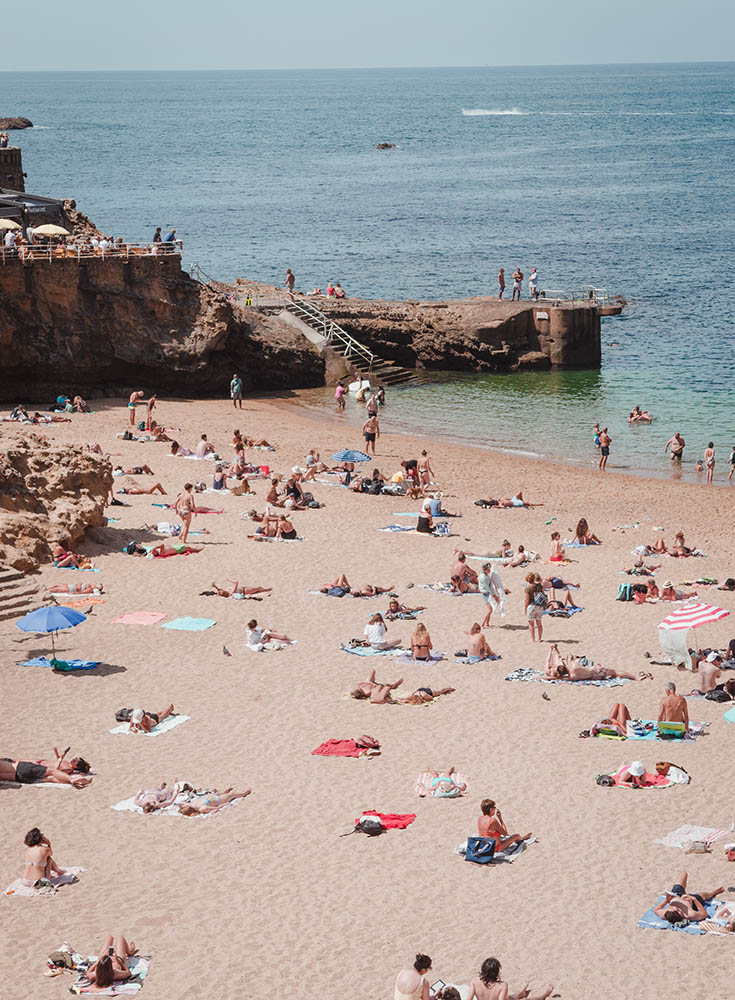 Biarritz is a fantastic place to visit in the south of France, and one of the most popular reasons people plan trips to this resort city is its thriving surf culture.

The history of surfing in Biarritz and Europe as a whole dates back to 1957 when American film director Peter Viertel had one of his friends come to visit from California. This friend surfed off the coast of the city and that’s often considered to be the first time anyone surfed in Europe.

Even if you’re not into surfing, you can experience the beaches in other ways and stop by the various museums and casinos located throughout this seaside city.

Carcassonne is known for being a medieval stronghold, and you can see evidence of this in the city today when you walk the nearly 1.8 miles of stone walls and towers that still stand from this time.

It’s considered a bit more touristy than other south of France destinations on this list, but it’s still worth visiting to learn about the history of the area. You can also easily visit some of the nearby points of interest like the Languedoc wine country, especially if you rent a car while you’re there. 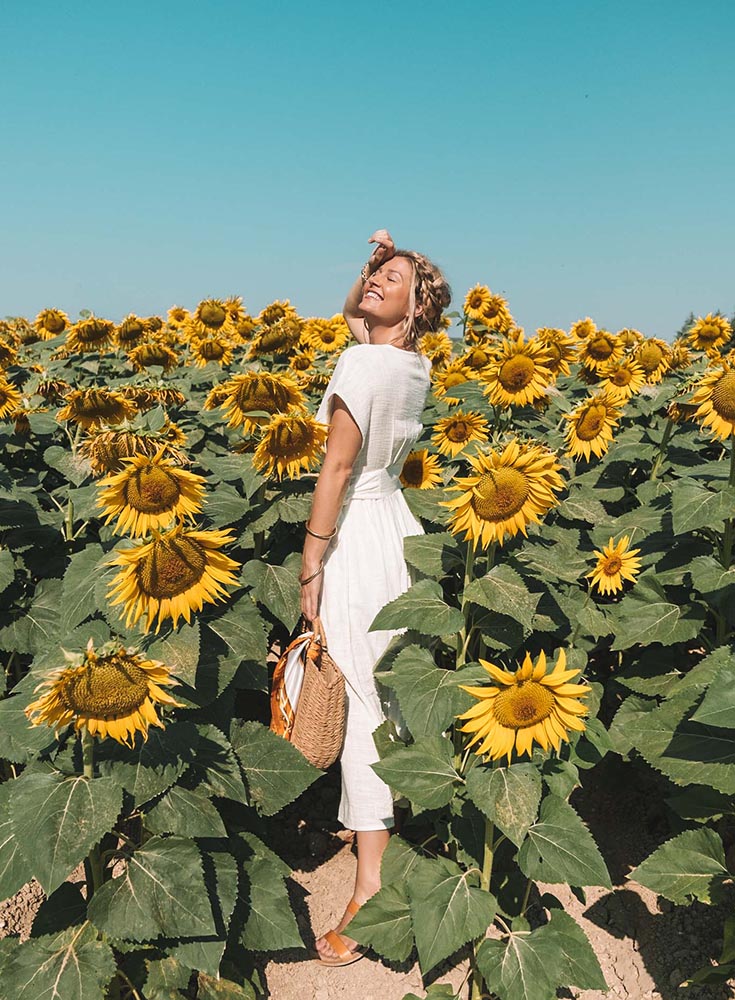 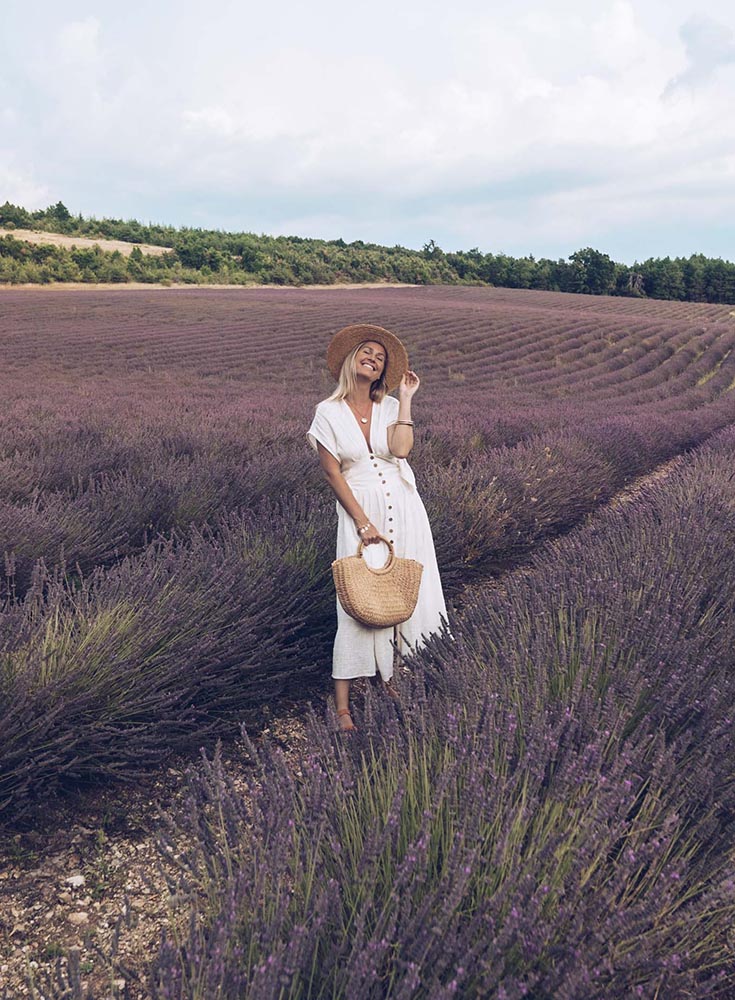 If you’re looking for a beautiful outdoor spot to take photos and immerse yourself in the natural beauty of the French countryside, make sure you check out the sunflower and lavender fields in Provence.

If you’re interested in seeing these fields in bloom, you’ll need to plan your vacation for early July as that’s when they’re at their peak.

These ten destinations are perfect for any itinerary. Whether you’re focusing on one or planning to rent a car in Provence and experience as many of these cities in the south of France as you can, each place has something unique to offer.

Are you prepping for a trip to Paris, or other regions of France outside of the capital city? Check out my France travel guide for everything you need to know to make sure your trip goes as smoothly as possible.