There’s no other place like Singapore. Located just off the southern tip of Malaysia, this vibrant city-state boasts a beautiful blend of Malaysian, Indian, Chinese, Arab and English cultures – all with its own Singaporean twist. The “Lion City,” as it's referred to, is filled with delightful culinary experiences, state-of-the-art accommodations and exciting nightlife. My ultimate Singapore travel guide is filled with travel tips to help you plan your own trip! 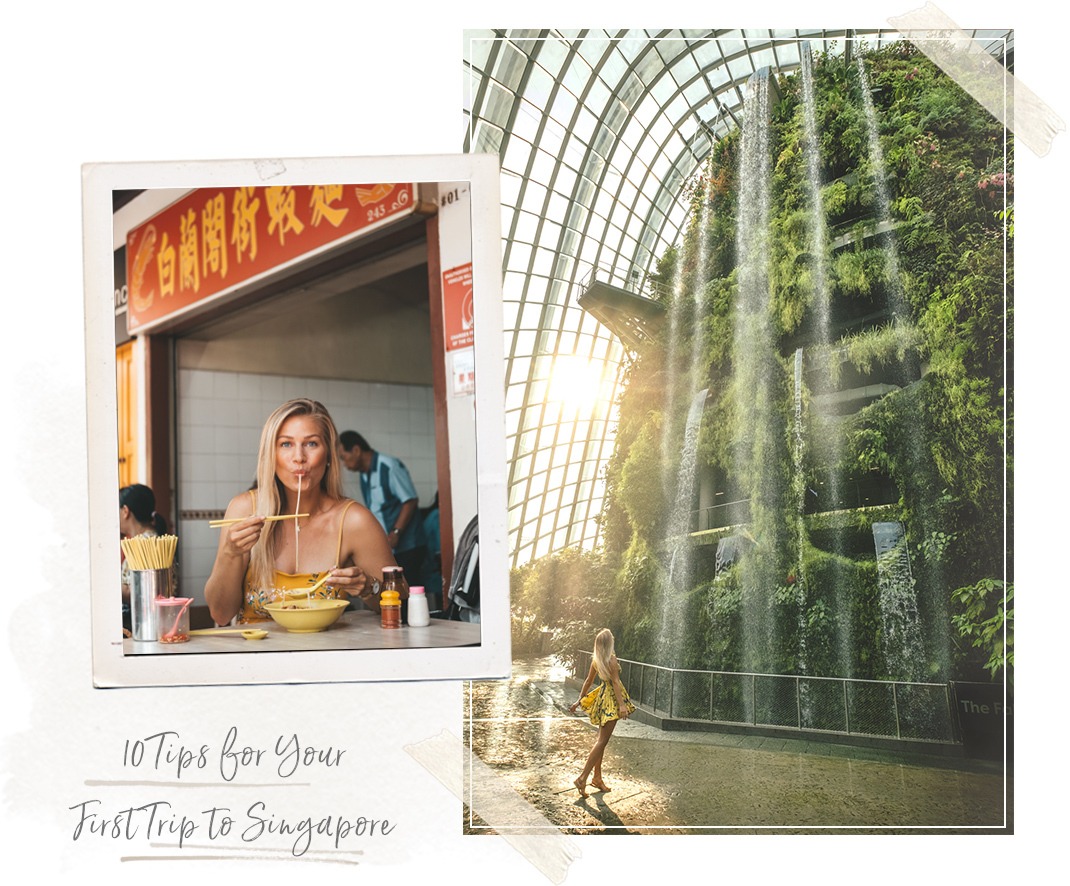 What to Expect in Singapore

Singapore, being one of the most prominent cities in the world, will provide you with a different kind of experience from the one you could expect in other Asian countries.

Language: Most locals are bilingual – proficient in English and either Mandarin, Malay or Tamil.

Currency: The Singaporean dollar (SGD) is the currency of choice here. Currently, $1 U.S. dollar will get you $1.33 in Singapore dollars.

When you’re budgeting for your trip here, keep in mind that Singapore is one of the wealthiest countries in the world. While you can find some bargains in Malaysia and Indonesia, Singapore is expensive so expect to spend the same as you would in a big American or European city.

Cards + Cash: Credit cards are widely accepted, but you should still carry some cash for food stalls, coffee shops and other small purchases.

The humidity level is high; the country sees an average of 167 days of rain per year, so bring that umbrella! 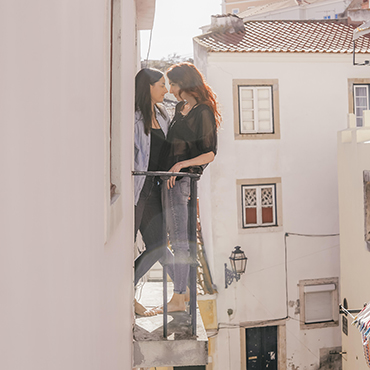 We spent a short visit in Singapore and despite being nervous about the country’s conservative laws, we did have a safe and positive experience as a same-sex couple. While there are no legal discrimination protections, female same-sex sexual activity is legal in Singapore, and LGBTQ+ acceptance is growing. We recommend doing your research and considering your own comfort level before visiting.

Getting Around in Singapore

While Singapore is a small country, there is still a lot to see. Just 31 miles wide and 17 miles long, Singapore has a remarkable amount of must-see neighborhoods like Little India, Bugis, Chinatown, Marina Bay, the Financial District, and Sentosa Island.

Public Transport: The Mass Rapid Transit (MRT) is an easy and affordable way to get around Singapore. The price of tickets depends on where you are going and generally runs around SGD 4 (USD 3). If you are planning to explore as much of the city as possible, the Singapore Tourist Pass can be a great deal. It gives you unlimited travel for a set period.

Taxi: An app called Grab is popular here, and the ride prices are cheaper than what a traditional taxi ride would cost. It works just like Uber, which is being phased out in Singapore. While there are a ton of taxis all over the city, they charge peak rates after 6 p.m., so it can get expensive quickly. 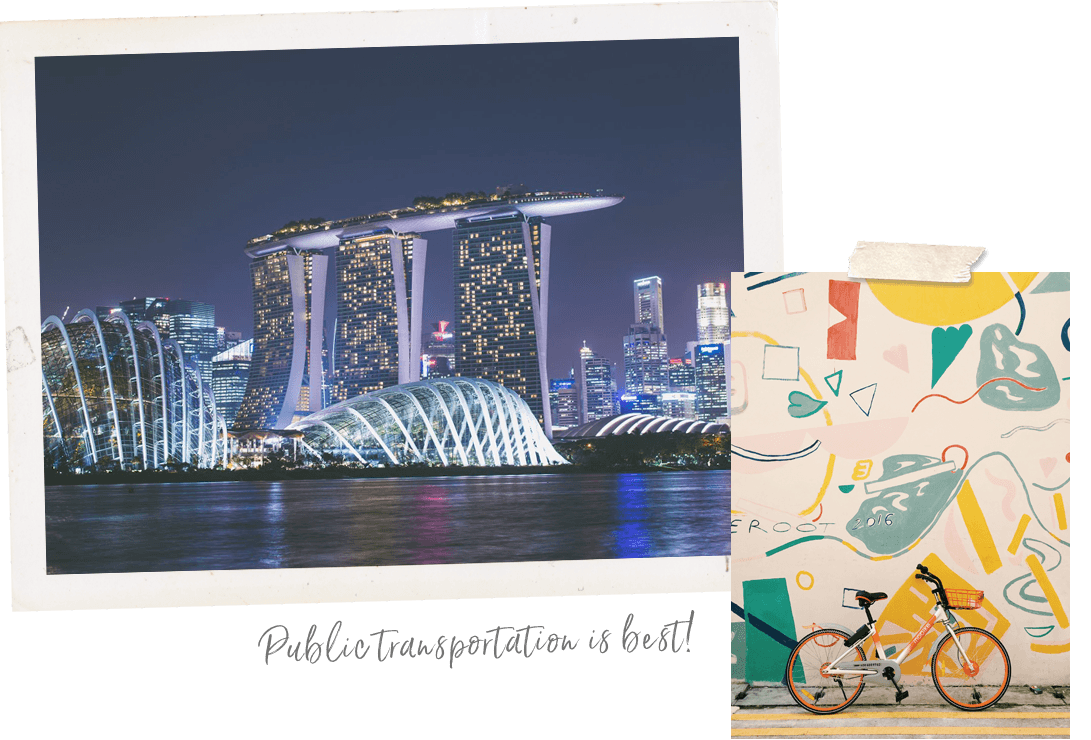 Travel Tip
If you’re feeling adventurous try bike-sharing in the city! A bike-share is a service where bicycles are available for shared use between individuals. 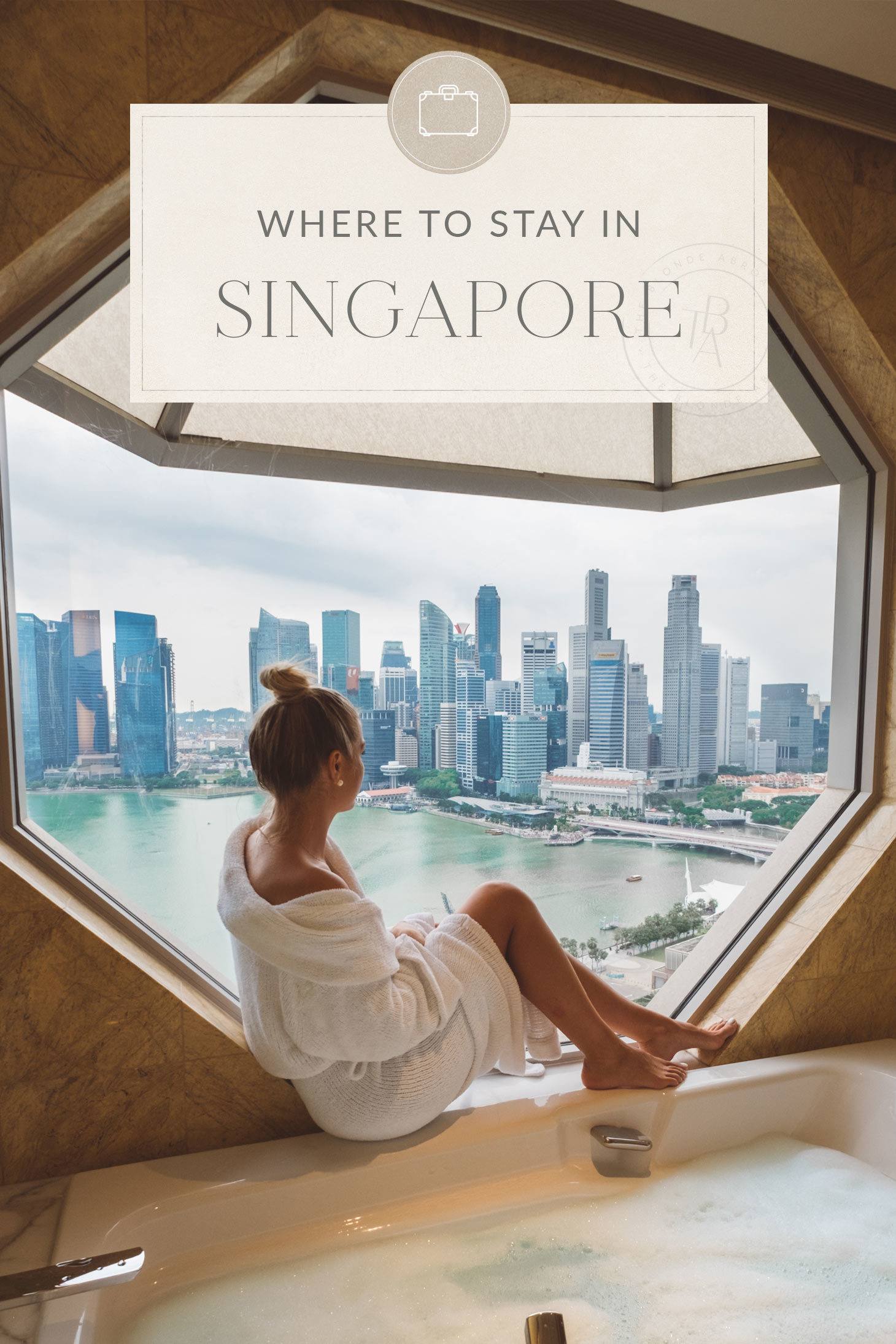 If you have ever seen pictures of Singapore, you have likely seen shots of the Marina Bay Sands hotel on the city’s scape. This place is easily one of the most famous hotels in Asia, if not the world. NOTE: If you want to swim in their rooftop infinity pool, you need to be a guest. 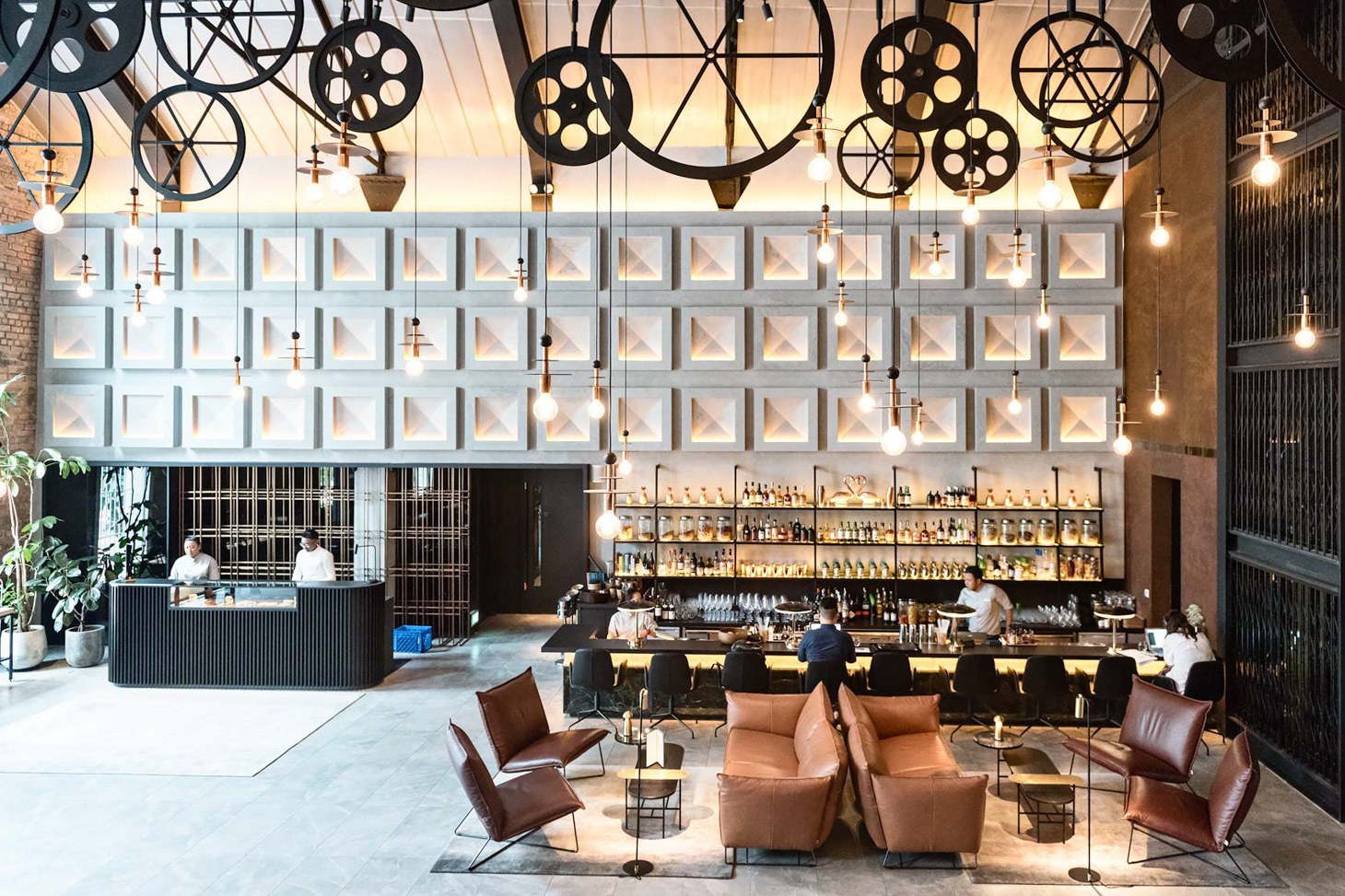 A five-star boutique hotel on the riverfront, the chic Warehouse Hotel is in a flawlessly refurbished 19th-century building. A perfect location on the waterfront right-off the MRT, the Fullerton Bay Hotel has a swanky rooftop bar and first-class service.

The Quincy Hotel was the winner of the Singapore Tourism Best Hotel Experience Award and is located in the centre of the trendy Orchard District. I love the art-deco style of the four-star Scarlet Singapore in Chinatown. It has a captivating old-world charm, plus is located in a convenient location. In the center of the historic Civic District, Hotel Kai is a great value for money. They provide guests with a 4G personal Wi-Fi device that works all over Singapore, which is really handy if you don’t want to get a SIM card. 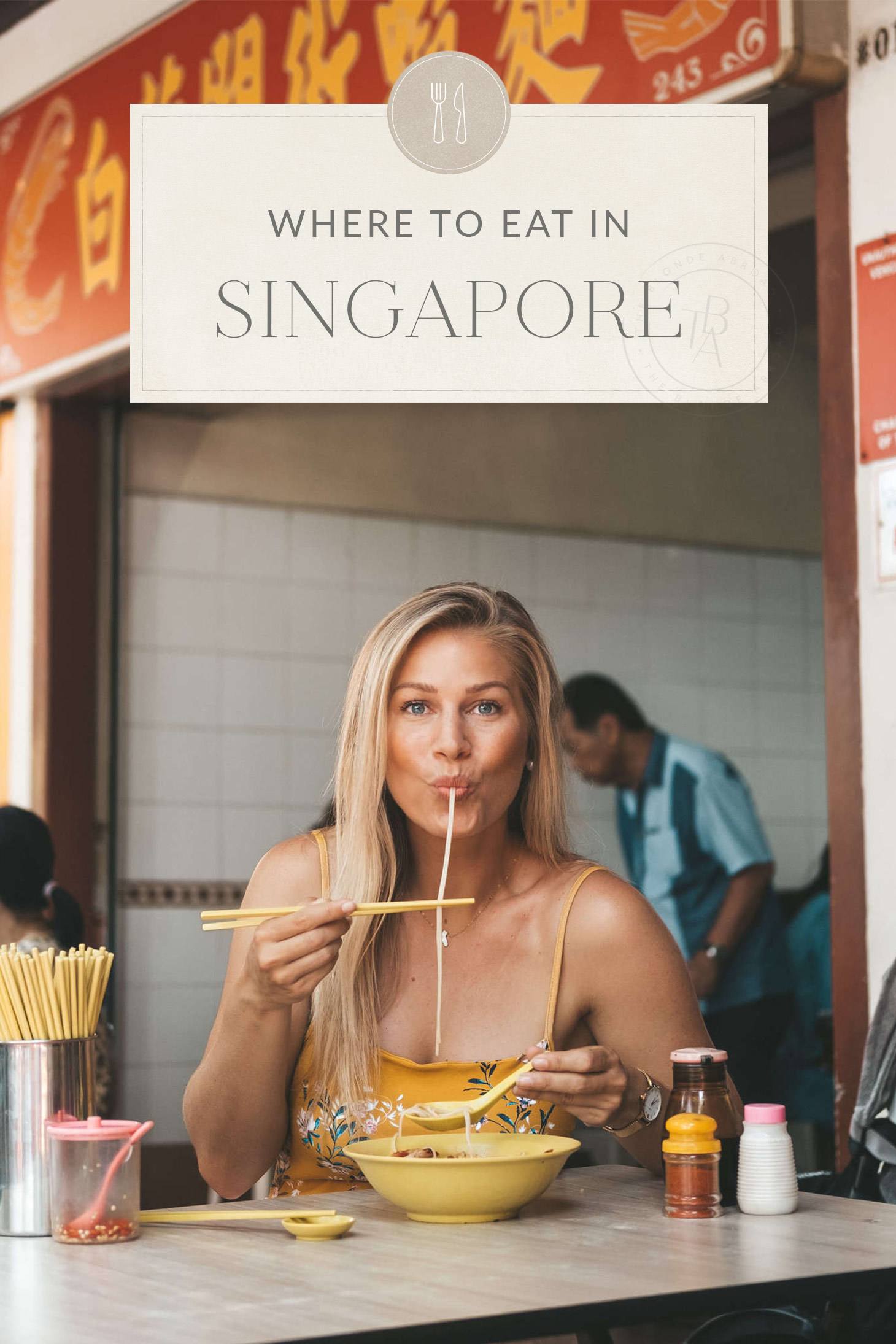 Colony at the Ritz Carlton

The Colony at The Ritz-Carlton serves up the greatest buffet I’ve ever tried, and it’s a great value for all the food you get.

When to Go: When you’re starving– the variety here is great!

For a fresh take on Singaporean staples, get to Po Restaurant at The Warehouse Hotel to check out this tasty spot.

What to Order: The Barramuni salad, the seafood congee, braised mahjong tofu and the fermented shrimp softshell crab! For dessert, don’t miss the ice cream popiah!

In the hipster hood of Tanjong Pagar, you can find Neon Pigeon serving up Japanese food tapas style. Singapore has a lot of delicious Indian food, but nobody can top the flavors at The Curry Culture.

This is my favorite soup, and it’s something I’ve always got my eye out for. There are a lot of street vendors dishing it up and the best I found was at 328 Katong Laksa.

To enjoy another one of Singapore’s must-eat dishes, chicken rice, Tian Tian is the place to be. I ate this slurp-worthy soup about 3 times in my visit of 48 hours to Singapore. It’s another one of the country’s best cheap eats. A savory broth is filled with your choice of yellow or white noodles and topped with prawn (you can also add pork).

Where to Find: There are countless shops, but I personally loved Beach Road Prawn Mee.

Located on Purvis Street, this is where all of the locals flock for a good meal on the fly.

Not sure what you are in the mood for? Just head down to Chinatown and let your stomach guide you through the food stalls. Whatever you do, don’t leave Singapore without going out for dim sum. With small bite-sized portions, this is the best way to try a bit of everything.

Food courts, also known as hawker centers in Singapore, are a perfect way to eat your way around the world!

If you like Indian food, this is one neighborhood you can’t miss! 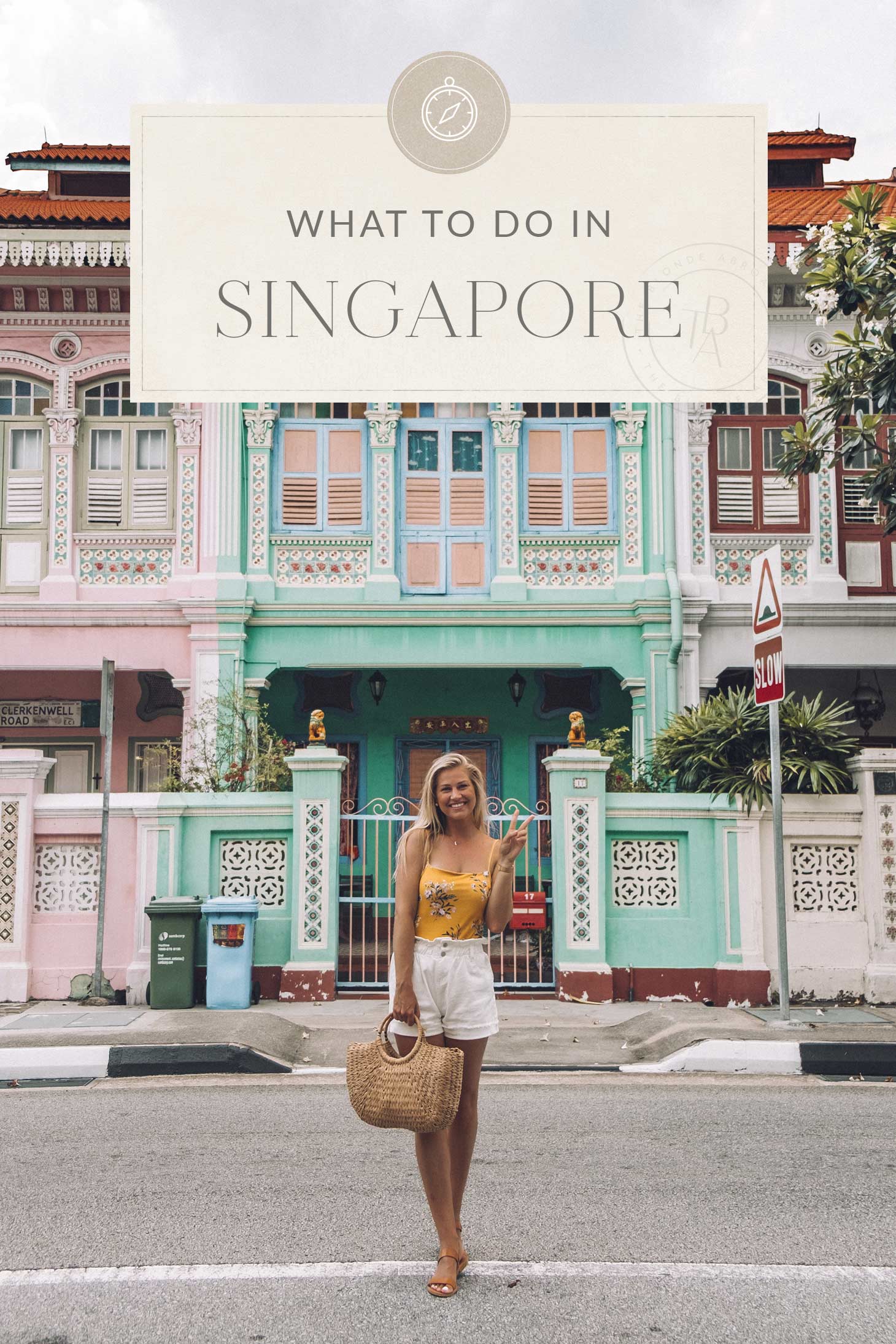 Singapore has some of the best food on the planet! Be sure to try the local cuisine at the hawker centers around the city. The local chicken rice, laksa, and chili crab are a must! There’s even a Michelin-star chicken rice stand.

A historic neighborhood, Joo Chiat is a perfect place to bring your camera and just wander around aimlessly. The colorful Peranakan houses are some of the most beautiful sites in Singapore.

Singapore is a melting pot in the truest terms, and you really have to get around to all of the different neighborhoods to understand what it’s all about. Start with Chinatown for its shops, night markets and dim sum!

A 158-year-old tropical oasis, Singapore Botanic Gardens is much loved by locals and tourists alike. Gardens by the Bay

Totally unlike any other garden I have ever experienced, Gardens by the Bay is well worth a visit. Have your camera ready for the surreal Supertree Grove and Cloud Forest!

More than just one street, this is a must-see neighborhood that includes Bussorah Street, Haji and Bali Lanes and Muscat Street. Start at the corner of Beach Road and just explore the shops, cafés and restaurants.

Do keep in mind that most places are closed on Sundays. With that said, the stunning Sultan Mosque (Masjid Sultan) is a must-see sight that is also located here!

The Quays along the river are famous here! Explore Boat Quay, Robertson Quay, then get down to Clarke Quay for restaurants, bars and other fun spots.

If you are lucky enough to be here in autumn, which is typically from mid-September to mid-October depending on the year, get down to Singapore’s Chinatown for the epic Mid-Autumn Festival. 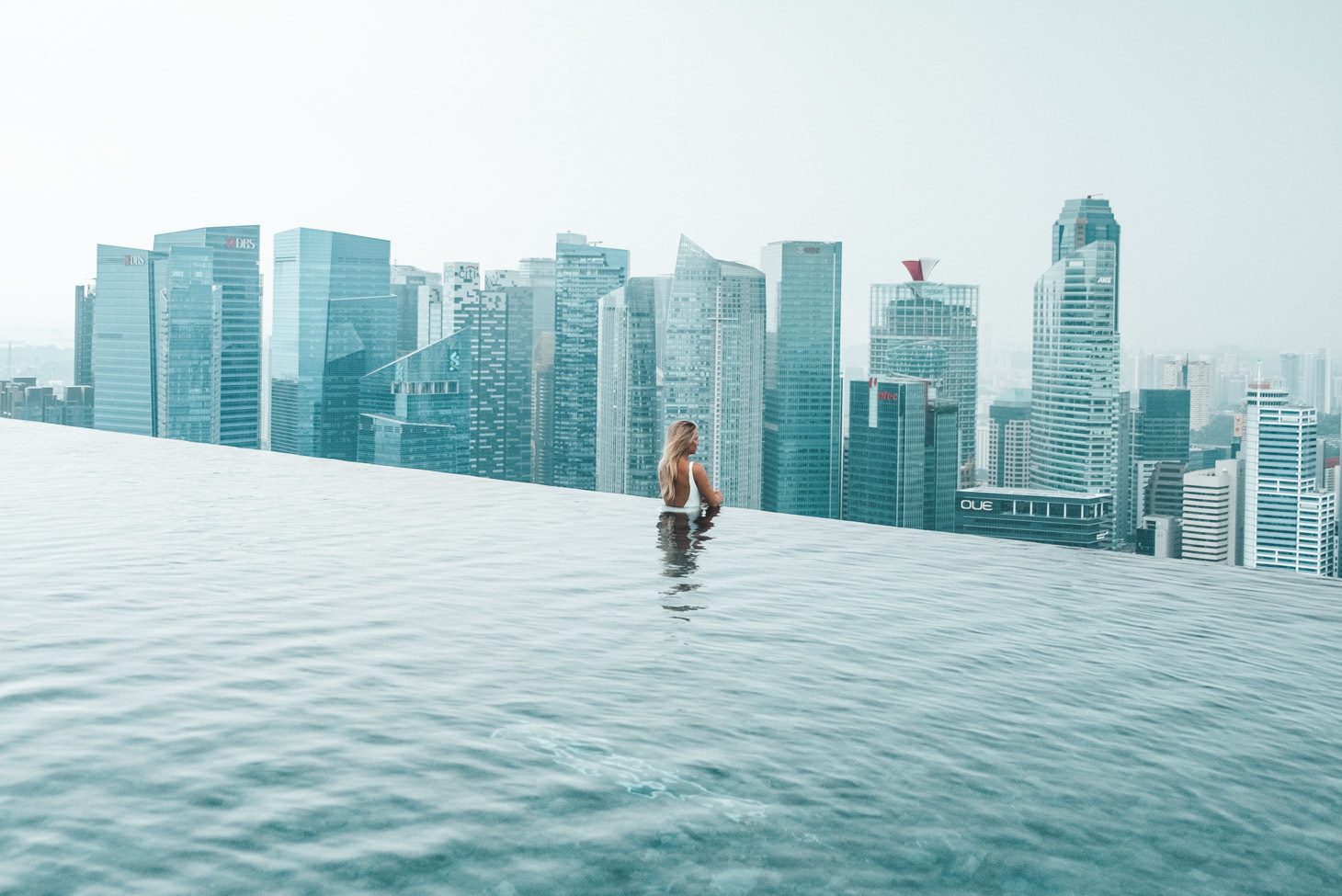 This sky-high infinity pool has become one of Singapore’s most iconic sites. I stayed here on my trip, which is the only way to get access to the infinity pool.

However, if you just want to see the view, you can buy a ticket to the Observation Deck for the once in a lifetime view of the cityscape.

A playground for Singaporeans off the southern coast of Singapore, this massive resort-style island has theme parks, golf courses, spas and a gorgeous coast line!

Tons of Singapore walking tours take place all over the city. Whether you want to explore the city’s delicious culinary scene, learn about Malay heritage or have a guide take you around to all the top sights – there’s a tour for you!

You can get to Singapore by either air, sea or land. Choose between flying to Singapore’s Changi Airport (voted best airport in the world!), taking a cruise to the Marina Bay Cruise Centre or take a relaxing drive from West Malaysia straight into Singapore. 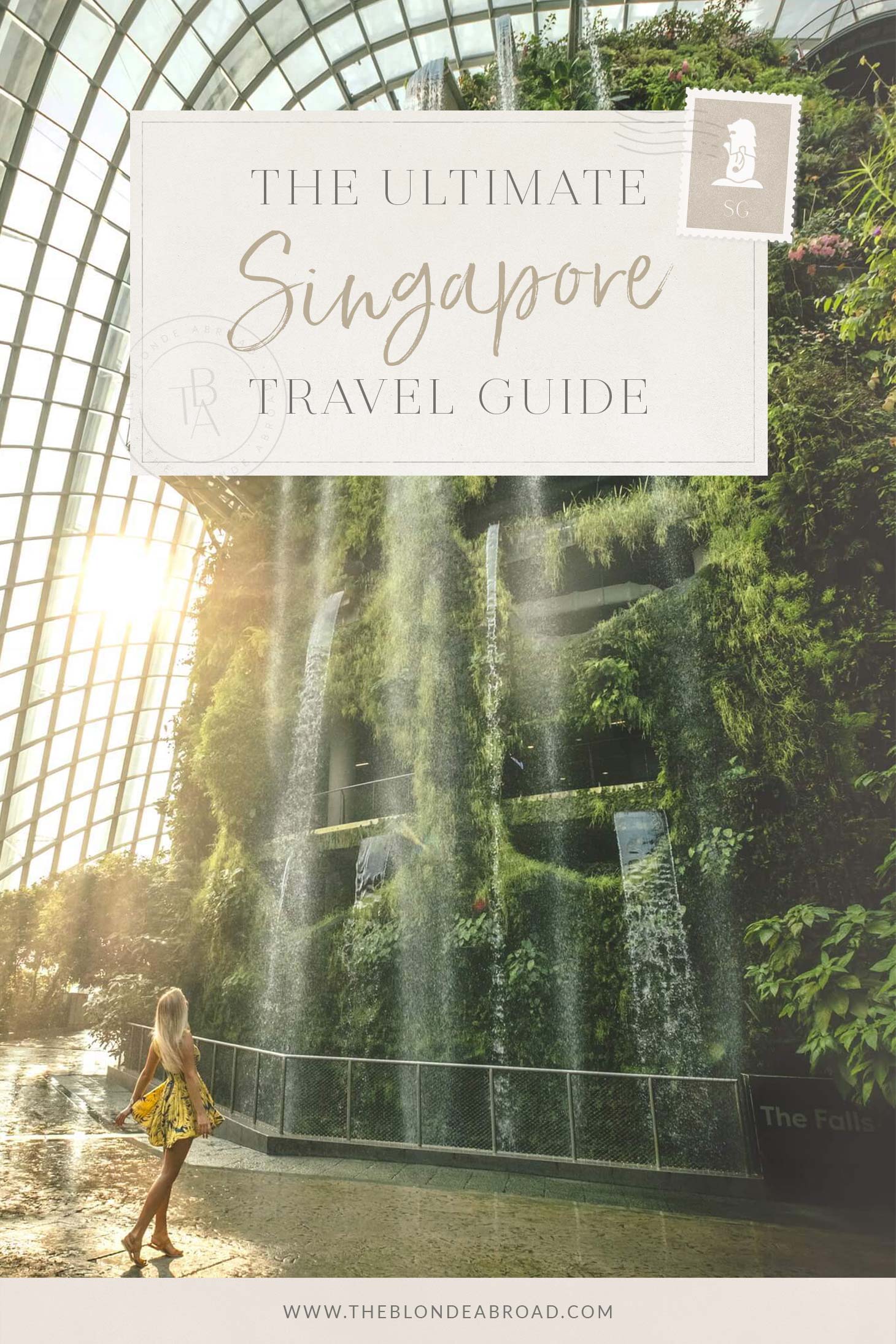 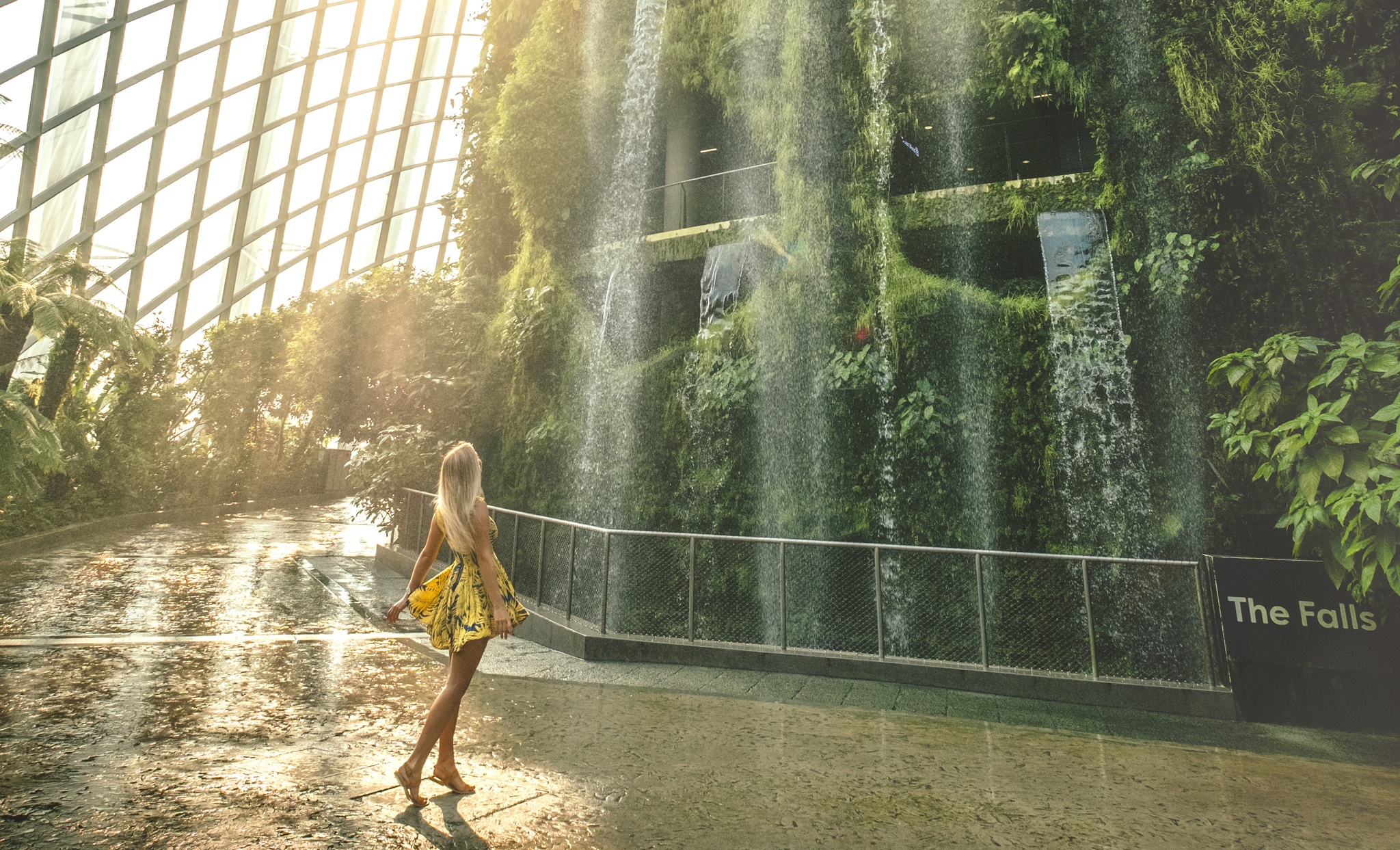 Itinerary for Singapore in 3 Days

Most travelers choose to explore Singapore during a stopover, since the Changi Airport is a big hub for destinations throughout Asia. Whether you only have a few hours, or want to explore Singapore in 3 days, you can build an awesome itinerary and hit all the top things to do. Here are my must-see recommendations! 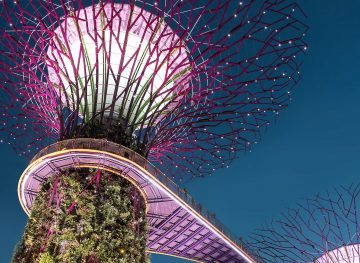 10 Tips for Your First Trip to Singapore

As one of Southeast Asia’s most fascinating spots, Singapore is a diverse island country that has something of interest for every traveler. Ready to visit this one-of-a-kind nation? Here are ten tips for your first trip to Singapore. 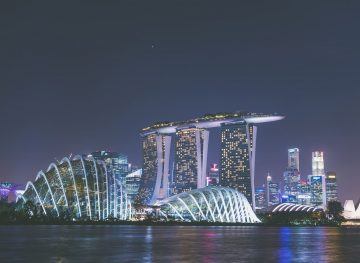 How to Travel Singapore on a Budget

As a travel destination, Singapore definitely isn't the easiest on the pockets. Though, you shouldn’t let that keep you from visiting the gorgeous country! Here’s how to travel Singapore on a budget. 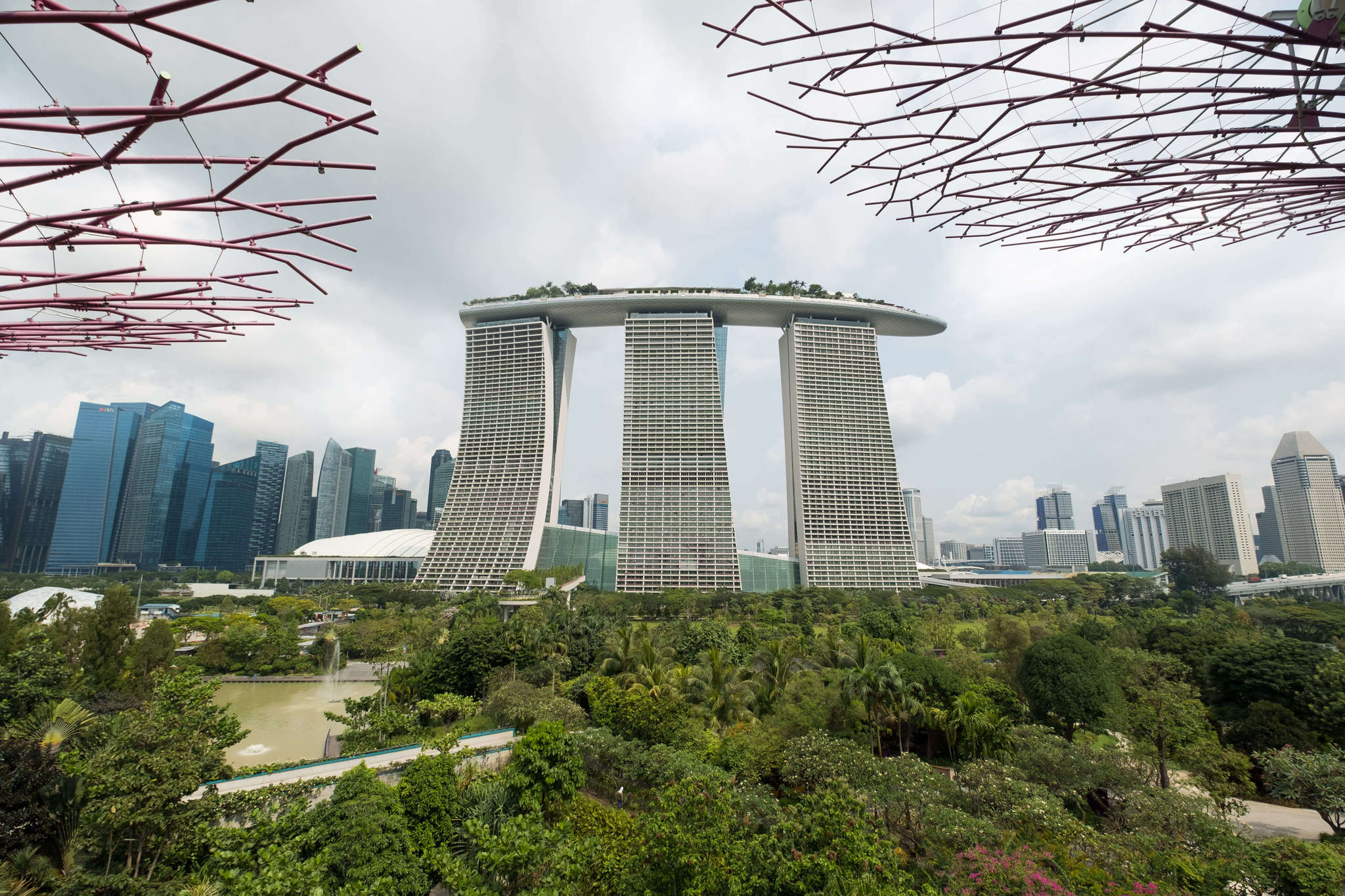 If you have ever seen pictures of Singapore, you have likely seen shots of the Marina Bay Sands hotel's famous infinity rooftop pool. 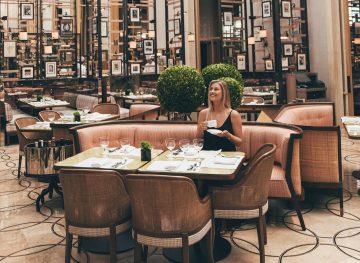 Staying at The Ritz-Carlton, Millenia Singapore

Synonymous with first-class accommodation, the Ritz is one place that never disappoints. Here is my review staying at The Ritz-Carlton, Millenia Singapore! 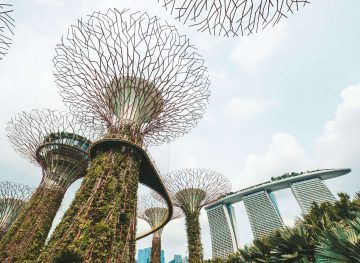 20 Photos to Inspire You to Visit Singapore

This city is full of beautiful sights, unique attractions and delicious food. Here are 20 photos to inspire you to visit Singapore! 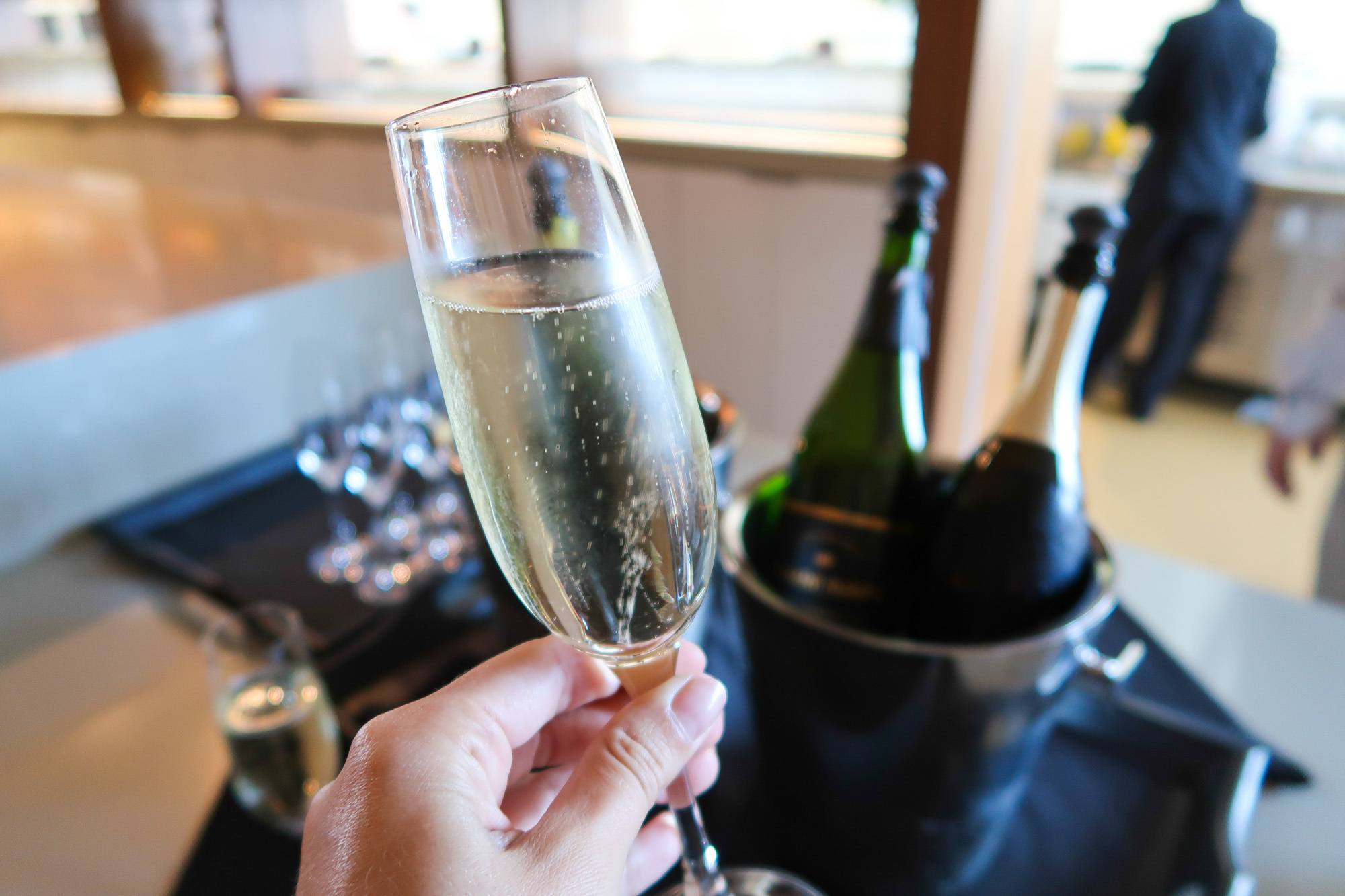 My recent trip from Los Angeles to Tokyo was a dream! I upgraded to Singapore Airlines Business Class for the 12-hour flight, and here's my experience. 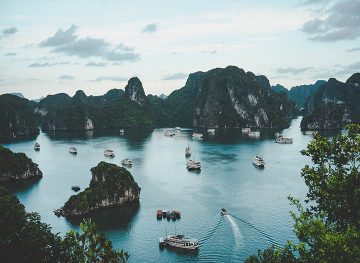 If you are thinking of taking your first trip to the region, here are travel tips for first-timers interested in backpacking Southeast Asia! 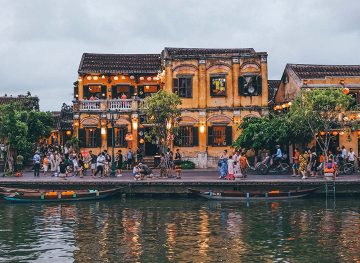 How to Connect with Locals in Southeast Asia

When it comes to visiting a new region it can be difficult to meet and travel with locals. Here are my tips on how to connect with locals in Southeast Asia.