Flores is the gateway to Komodo Island and one of Indonesia's top destinations. It's home to an alluring archipelago with lush, volcanic landscapes and fascinating history. It's the perfect destination for thrill-seekers looking to get off the beaten path. The island boasts some of the top dive sites in Indonesia and challenging hikes past active volcanoes. Here is my ultimate guide to Flores Island, Indonesia! 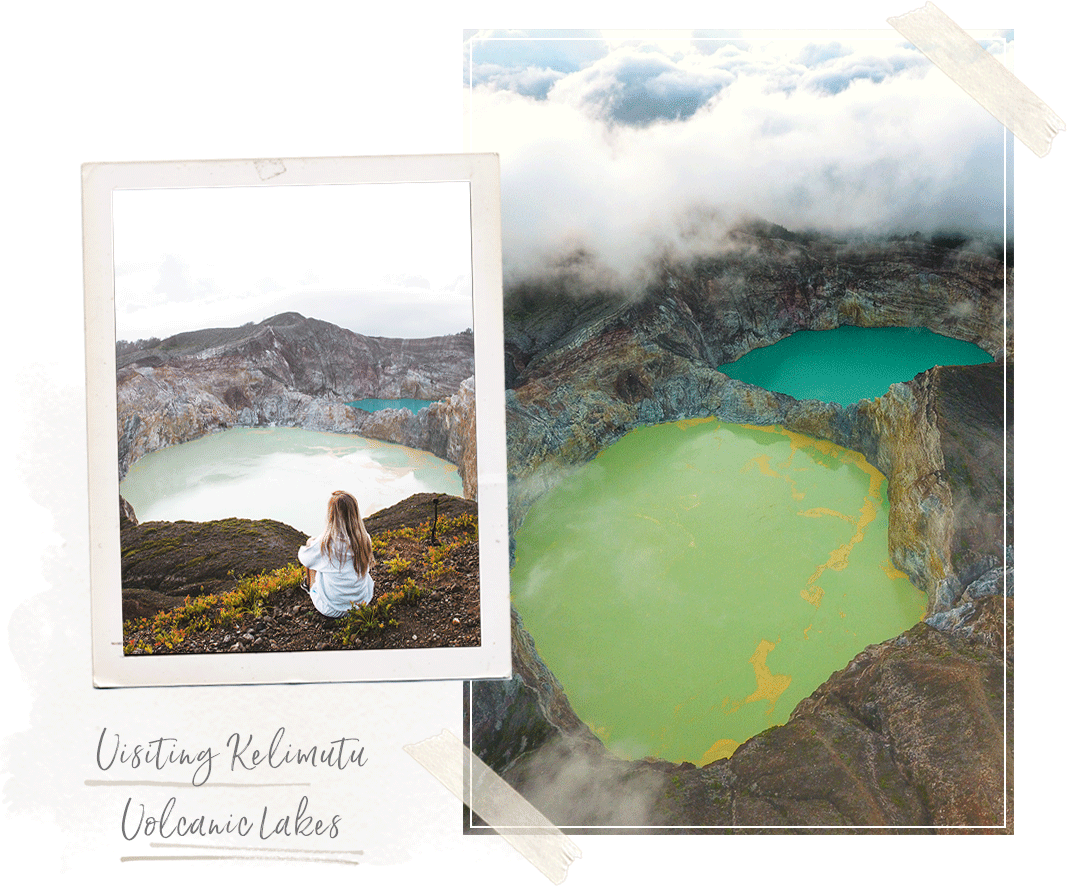 What to Expect on Flores

Language: There there are six identifiable languages spoken on Flores Island: Ngada, Nage, Keo, Ende, Lio, and Palu’e. Locals would also add So’a and Bajawa. You’ll find most locals speak English in Labuan Bajo, but as you travel to more remote areas, it will be harder to find someone who understands the language.

Currency: On Flores, the only accepted currency is the Indonesian Rupiah (IDR). There are ATMs around the island in the district capitals, and most places accept major credit cards like Visa and Mastercard. The ATMs of the National Bank of Indonesia (BNI) are the most reliable.

Climate: The climate for Flores Island is tropical and hot year-round. From December to March, it’s the rainy season, and humidity is high. From June to September, it’s the dry season. The best time to visit is between April and October. There’s a strong wind from Australia, keeping humidity levels low and making outdoor activities more bearable. You’ll still get lots of sunshine if you visit during the rainy season. The showers are short, but intense so you won’t have to spend the whole day inside.

While it is an island, Flores is spread out over 13,000 square kilometers with a local highway that runs over 600 km! Here are some of the best ways to get around:

Bus: You can book a spot on a local or tourist bus with most hotels on the island. Some will pick you up from your accommodation while others will stop for you on the side of a road. Prices start from 50,000 IDR, and you can choose between A/C and no A/C options.

Hire a Car: If you want to hire a car, keep in mind that the roads aren’t in the best condition. There’s also a lot of hills, and sharp corners and the locals are known for driving fast. It’s also the most expensive way to get around with prices starting at 1 million IDR.

Flights: You can save time by flying into the various airports around the island. It’s not the cheapest option, but if you want to see as much as possible, it’s a good option to consider.

Private Tours: Another option is to book a Flores tour that will take you to all the top spots around the island. This is a good option if you don’t want to drive or rely on public transport to get around. 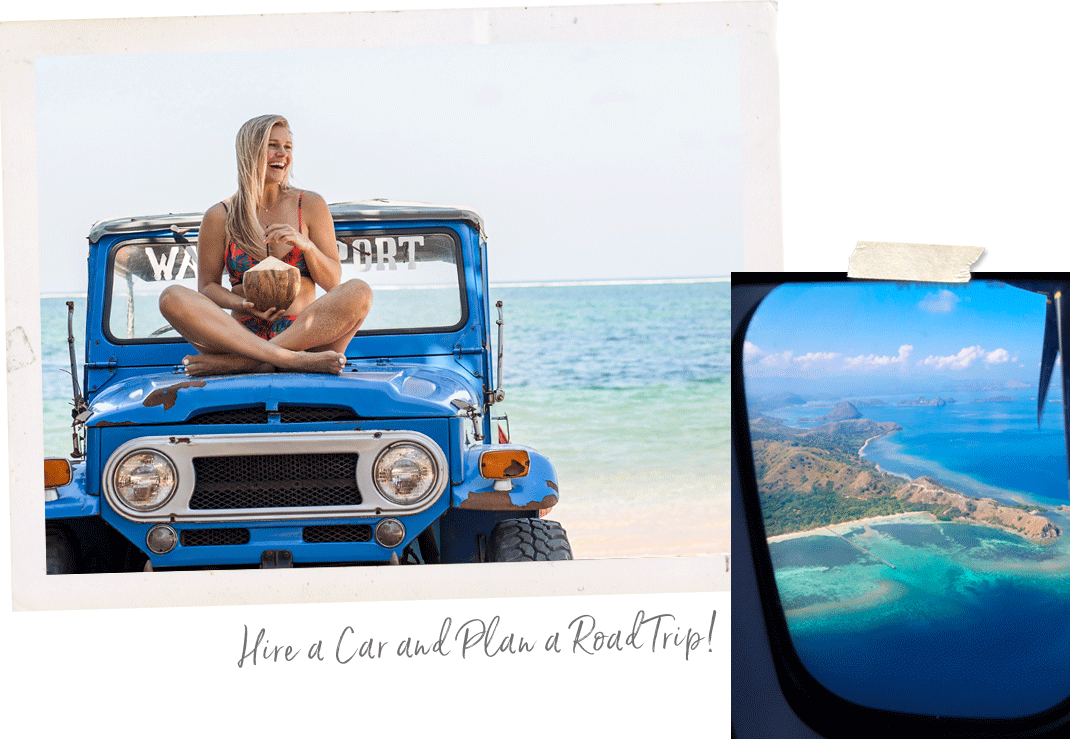 Travel Tip
Pack reef safe sunscreen: If you're planning on snorkeling, swimming or diving in the ocean make sure you're protecting the marine environment. Ordinary sunscreens have chemicals that damage the reef and destroy the fragile ecosystems. 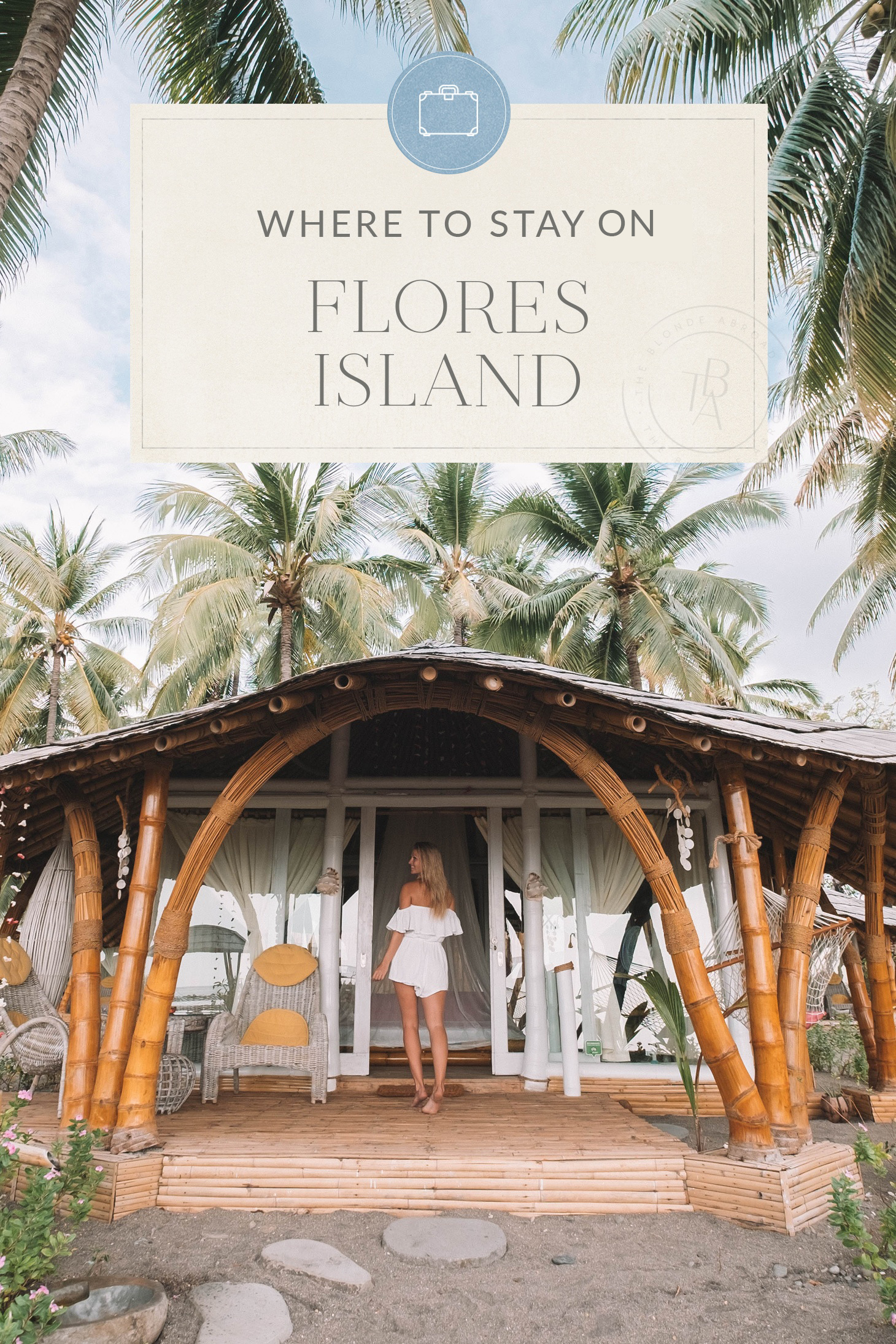 Where to Stay on Flores

I’d highly recommend staying in Labuan Bajo as it’s the main city on the island and will have the most options for hotels, restaurants, tours, and more! As with other island destinations in Indonesia, the prices are quite affordable and you’ll find something for any budget. I opted for an eco-resort during my visit to soak up as much nature as possible.

So, I’ve rounded up the top hotels on Flores Island!

Coconut Garden Beach Resort is located on the west coast of Flores. It’s the only hotel in the region dedicated to being green. Stay in one of the eight private bungalows and enjoy the picturesque private beach, delicious restaurant, top-notch bar, and fitness center. Read about my experience here. 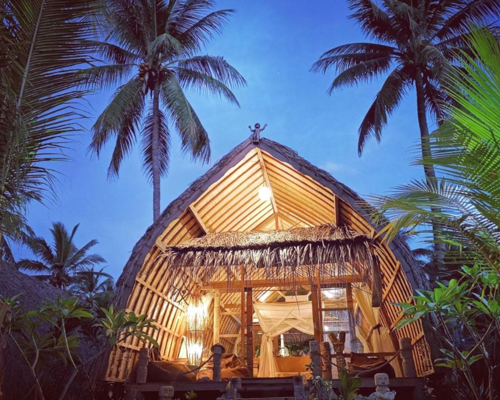 This stunning, beachside hotel + hostel in Labuan Bajo has a restaurant, bar, outdoor swimming pool, and a fitness center, along with free WiFi! 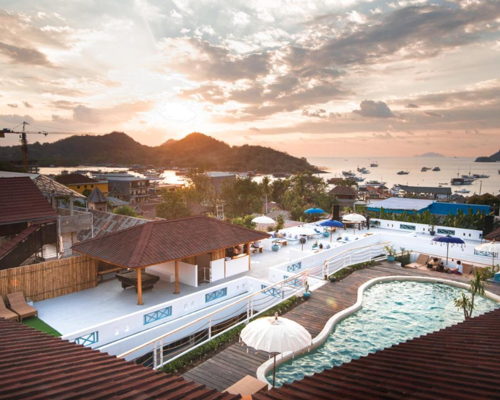 The Bintang Flores Hotel is a four-star hotel located right in the middle of Labuan Bajo. It beautifully blends the local style with modern luxuries. Choose from one of the 101 rooms which range from junior to family suites. There’s also a large on-site swimming pool and a private white-sand beach. 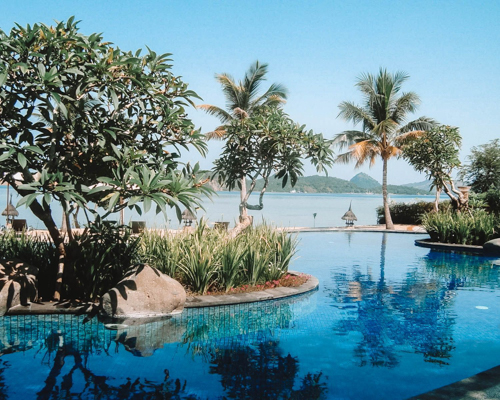 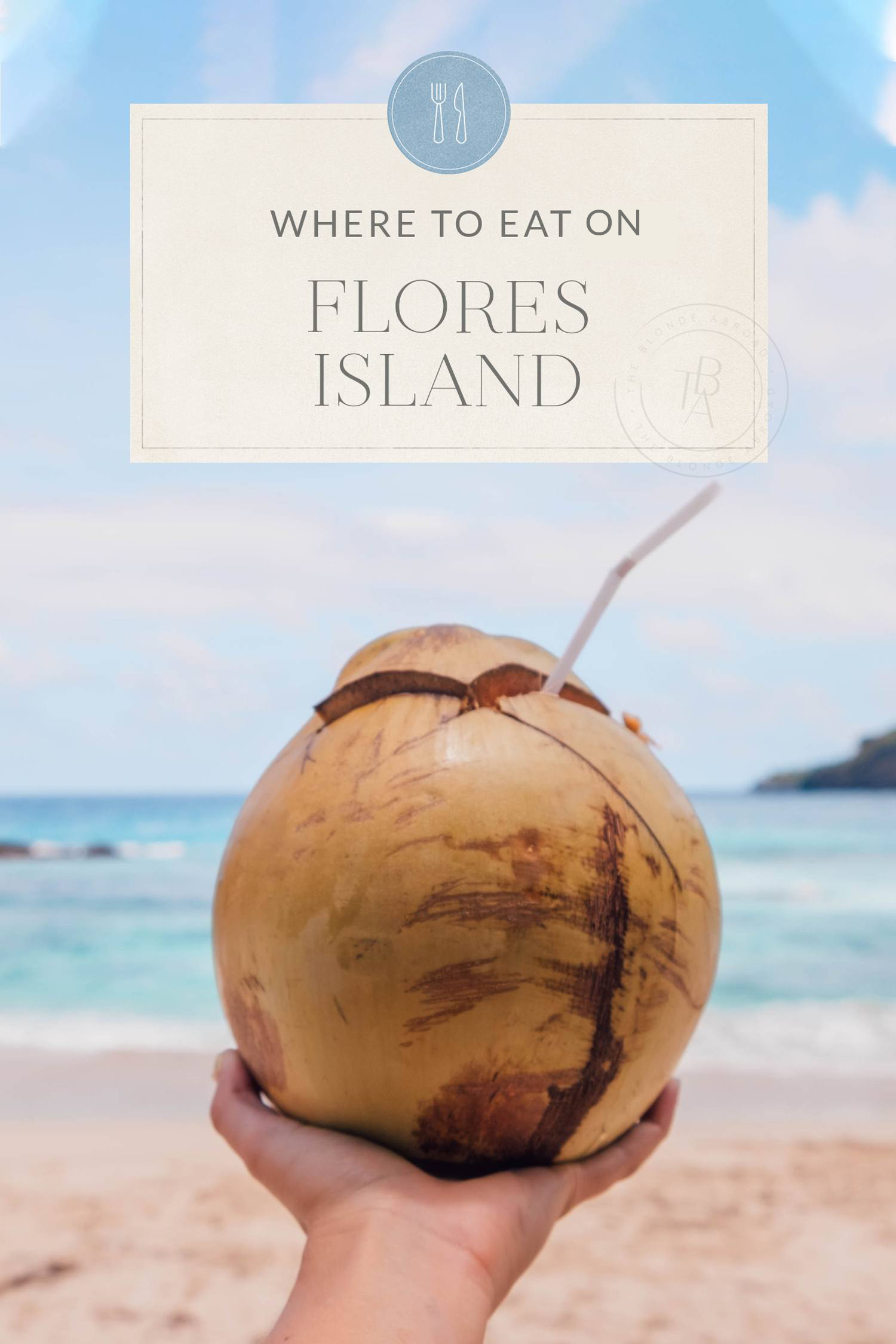 Where to Eat on Flores

Expect fresh seafood and Indonesian and Asian fusion cuisine when on Flores. I only had a few days to get a taste of the local offerings, but here are my favorite restaurants to try on Flores!

I’m a huge fan of restaurants that serve up amazing food with a gorgeous view. Tree Top, in Labuan Bajo, offers sweeping views of the landscape and is one of the best spots to watch the sunset on the island. The restaurant is known for its seafood and fusion of Western and local dishes. You can’t go wrong with one of their shrimp or squid dishes!

Happy Banana Komodo is a tasty and healthy lunch option in Labuan Bajo. I couldn’t get enough of their sushi! The food consists of healthy Japanese fusion dishes with a focus on rolls and poké bowls. All the ingredients are fresh, and everything on the menu is incredible. 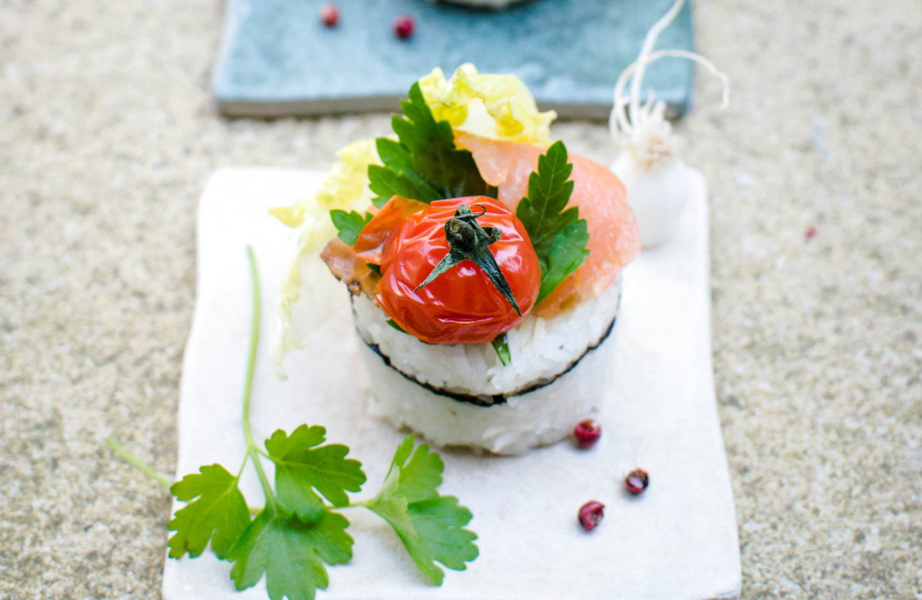 Chacha is a great budget-friendly restaurant in Ruteng that will leave you wanting more. Jofan and Yayuk, the owners, really go out of their way to provide quick and friendly service. Some of the food highlights include the chicken, the satays, and the home-smoked pork. 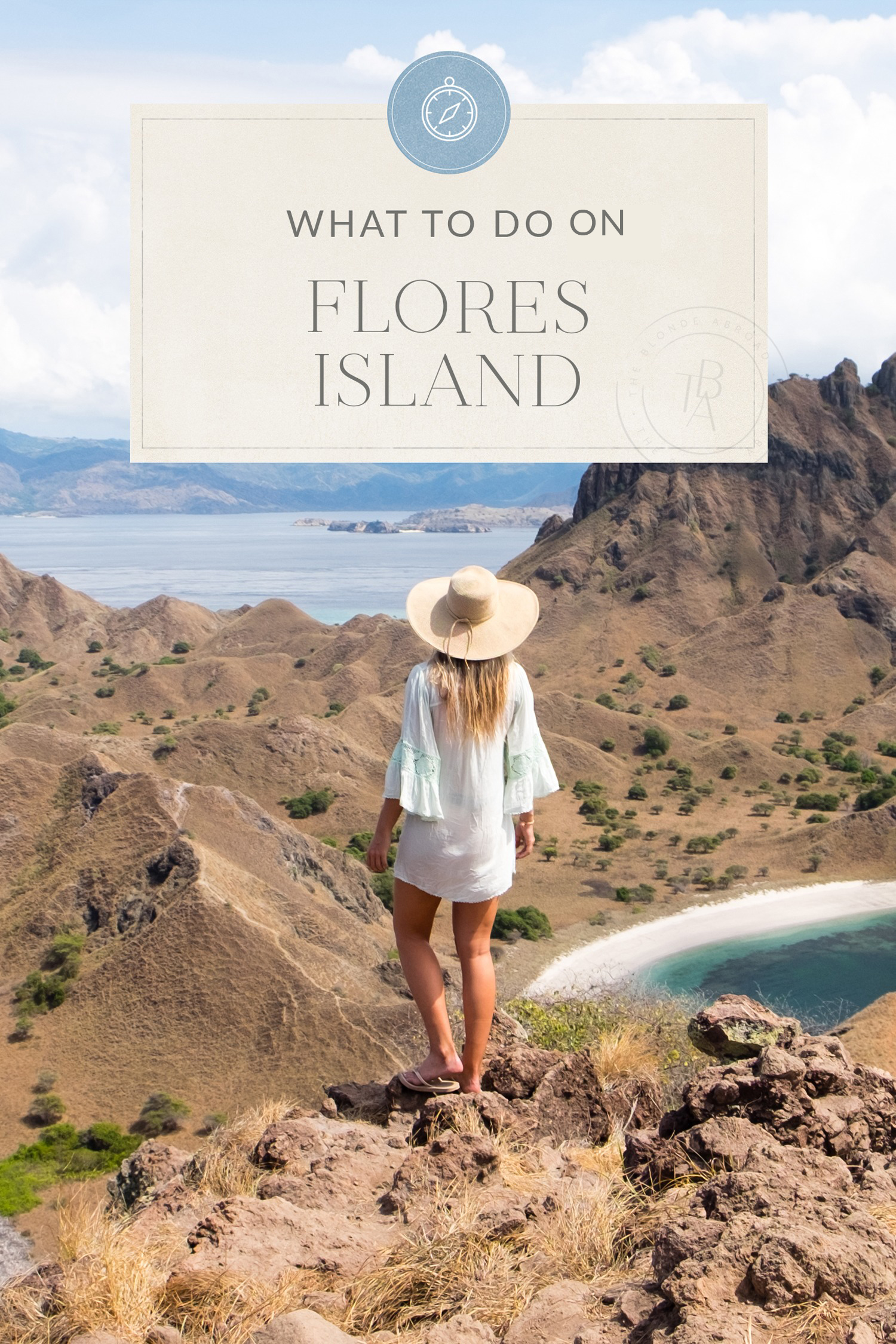 What to Do on Flores

Flores Island boasts some of the top dive sites in Indonesia, and challenging hikes past active volcanoes—it’s perfect for any beach and nature lover! I’d recommend exploring Labuan Bajo and booking day boat trips to the surrounding islands and beaches.

Here are the top activities for Flores Island!

Labuan Bajo is the gateway to Komodo National Park. If you’re flying in from Bali, it will likely be your first stop before going on to explore the rest of the region. With its beautiful hotels and decent tourist infrastructure, it’s the perfect base for exploring the island of Flores and its surroundings.

Komodo Island is home to Indonesia’s endemic Komodo dragons. These lizards can grow up to 8 feet long and weigh over 200 pounds! You can choose from 1 to 3-day all-inclusive tours. Make sure your trip also includes a stop at Pink Beach and swimming with manta rays at Manta Point! Read more about my Day Trip to Komodo Island, Padar and Pink Beach experience. 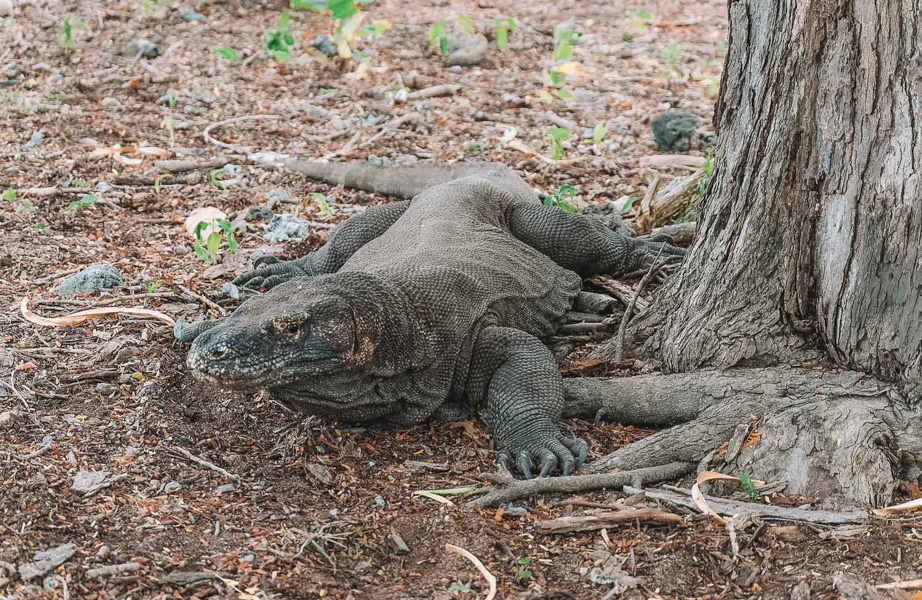 Wae Rabo is located in the central highlands of Flores. While there are a lot of traditional villages in Indonesia, Wae Rebo is one of the most picturesque. You’ll need to hike for four hours to reach the village, but the long trek is worth it to see the circular houses that are set in between the rolling hills.

Mount Kelimutu, with its tri-colored crater lakes, is by far the most amazing natural phenomenon on Flores Island. Drive up to the parking lot and walk an easy 30-minute trail to the lakes. You can read more about my experience Visiting Kelimutu Volcanic Lakes in Indonesia here! 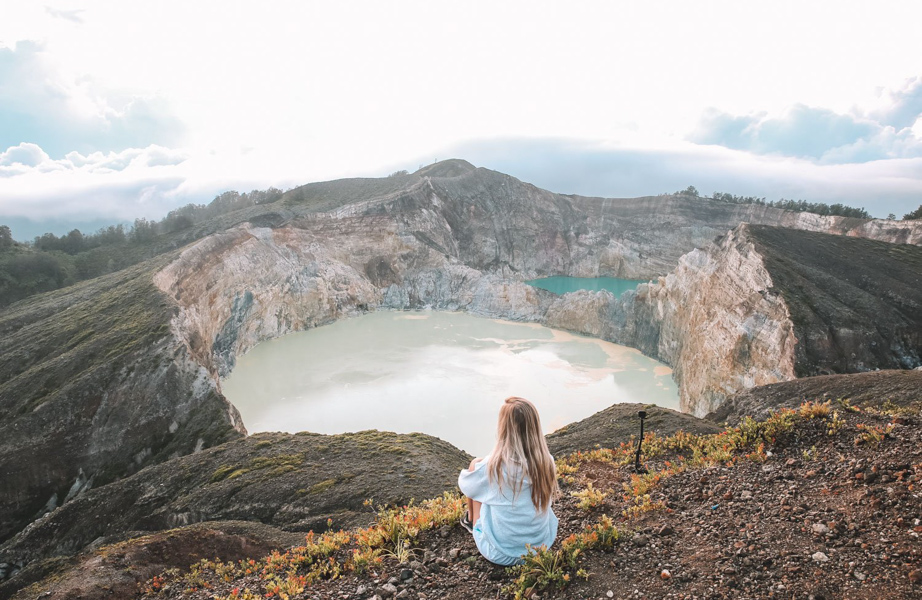 In Southeast Asia, it’s not uncommon to find rice paddies. However, on the island of Flores, the rice fields are designed in the shape of a giant spider web.

Created by the indigenous Manggarai people, the communal fields were circular with ceremonial rituals taking place in the center around the harvest. Cancar Village in Ruteng has the best examples of these spider web fields.

The summit on the Padar Island hike is out of this world. It’s located within the Komodo National Park and is known for its beautiful treks. With beautiful beaches and rolling hills, it’s an incredible destination for photographers. 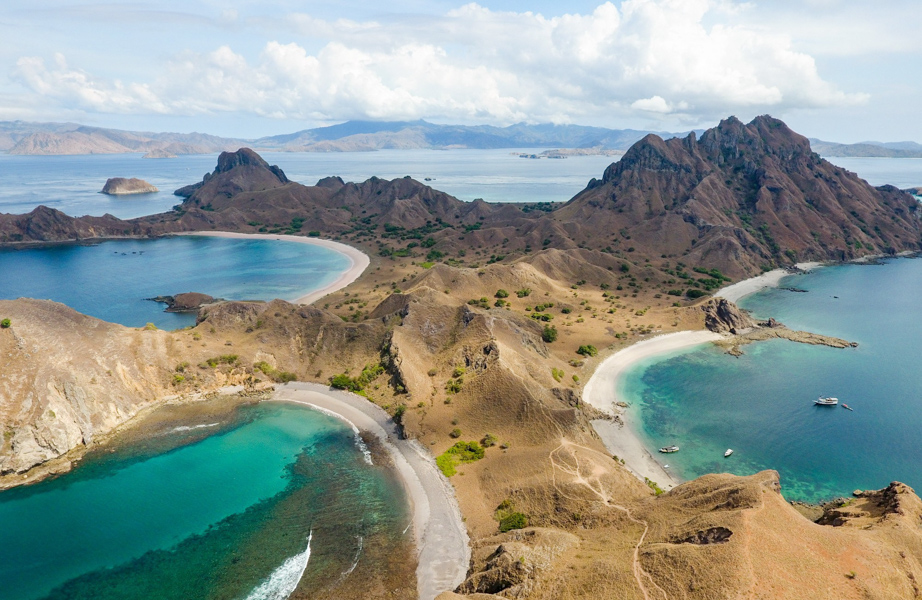 Pink Beach deserves a spot on any Flores itinerary. It’s located inside Komodo National Park and is famous for its pink sand and amazing diving spots. Note: Please don’t take any of the sand, it makes the beach less pink for future visitors and it will get confiscated by airport security.

Indonesia is famous for its incredible dive sites. It’s one of the reasons I was so excited about scuba diving around the Komodo Islands. During my trip, I dove at Pink Beach, Manta Point, and Batu Bolong (my favorite dive site of the day).

Check out more about Scuba Diving the Komodo Islands! 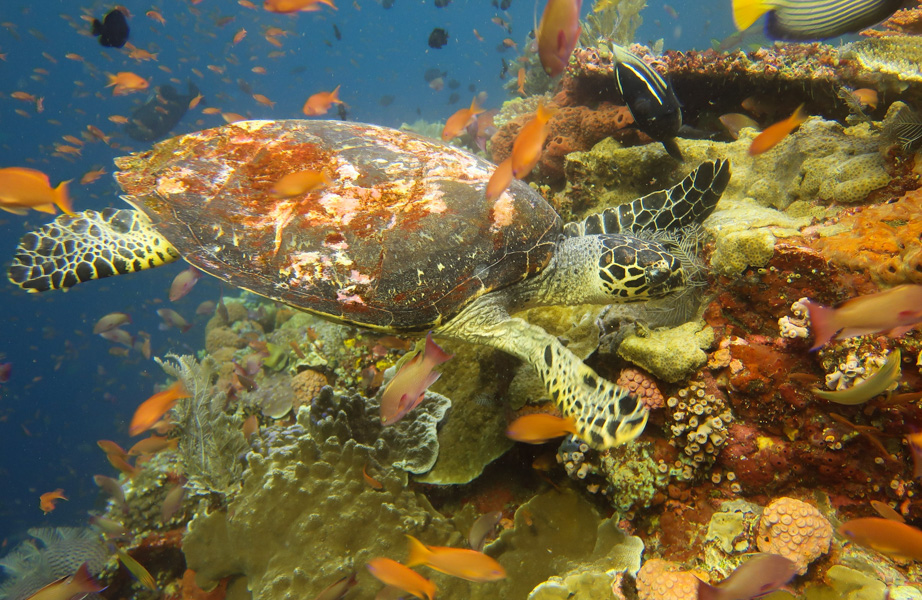 Shop My Style Essentials for Flores!

Most flights typically land in Labuan Bajo, with a total journey time of one hour. On average there are eight flights per day from Monday to Sunday with multiple airlines. You can also fly into Mamere or Ende which are about two hours away from Bali.

Check out my Guide for Finding Cheap Flights!

Indonesia is a conservative country. You'll need to respect the local culture by covering up your shoulders and wearing skirts or pants that go down to your knees.

For the beach, I recommend wearing one-piece suits rather than bikinis.

Read my packing guide for What to Pack for a Trip to a Conservative Country! 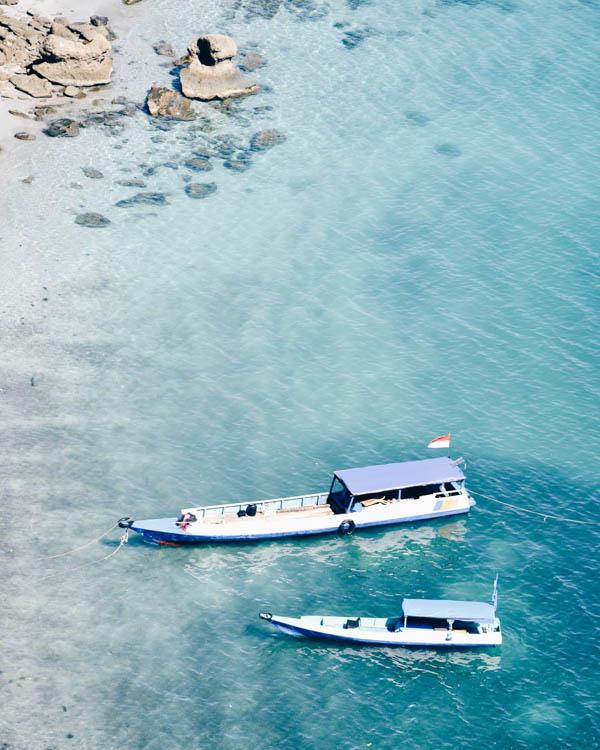 A Guide to Labuan Bajo in Indonesia 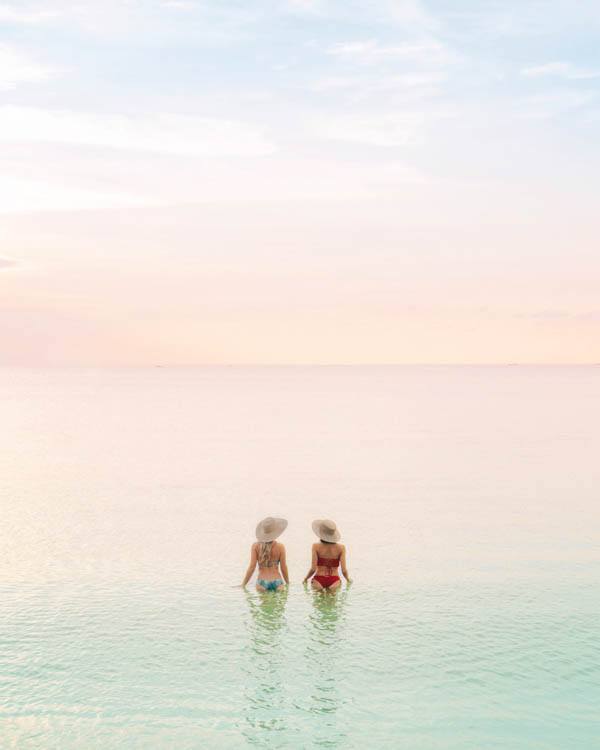 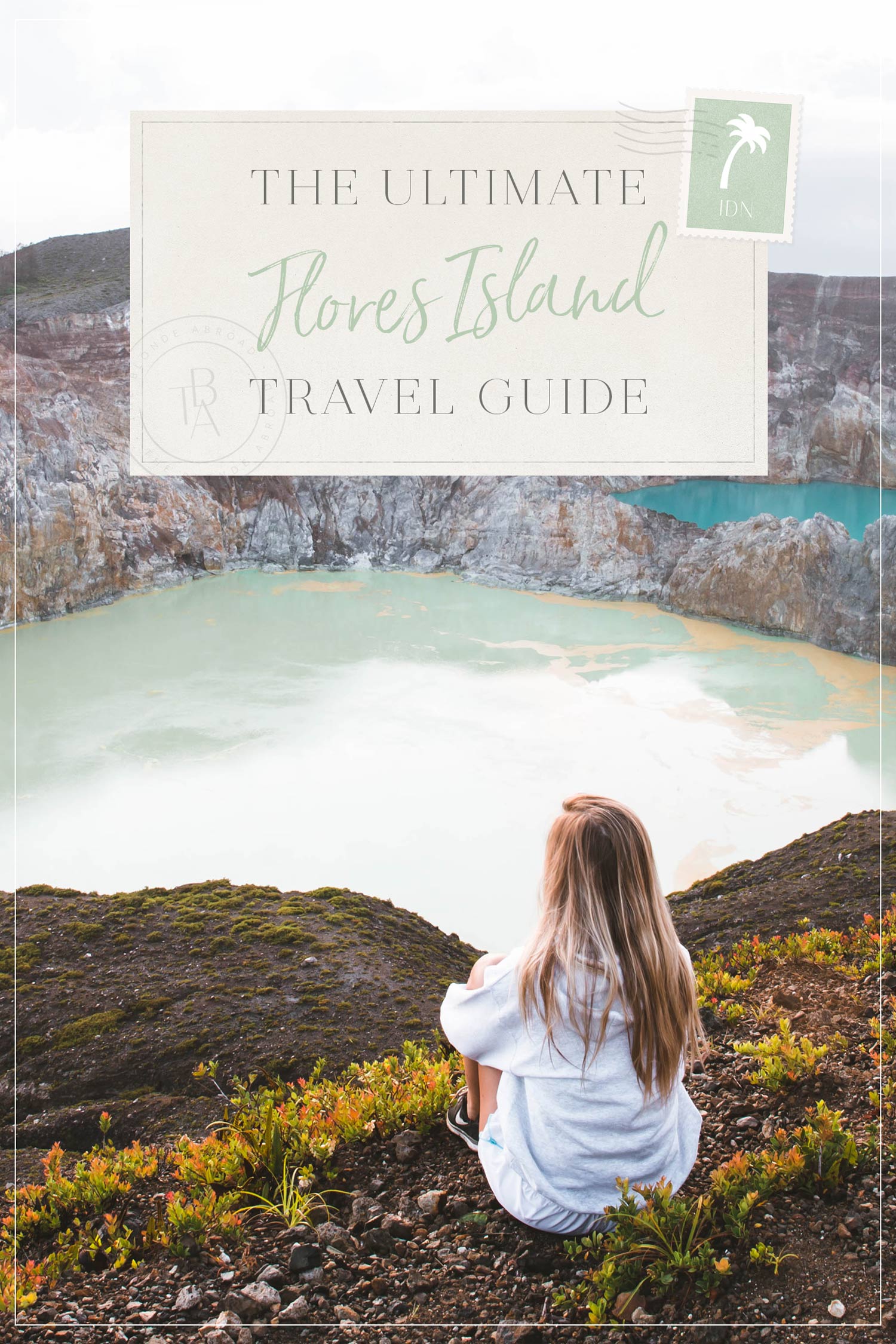 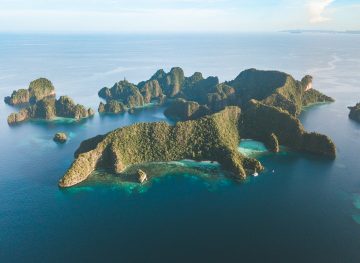 Indonesia is made up of a whopping 17,800 islands – something that would take you a lifetime to explore! Visit Bali, Komodo, Lombok, Gili T, or Raja Ampat! 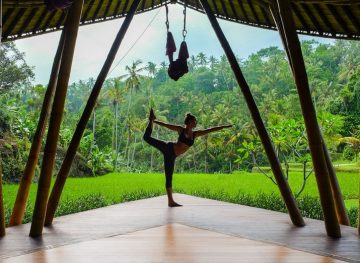 Bali has a lot of Western influence—from restaurants to yoga classes—and amazing beach and jungle adventures. Check out my ultimate Bali travel guide! 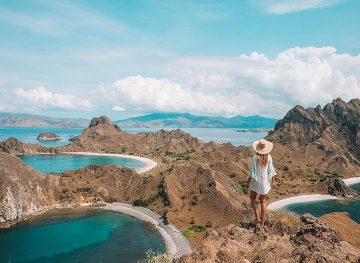 Diving the Komodo Islands definitely ranks as one of the top activities in Indonesia-- and the islands have some of the most beautiful reefs I've ever seen. 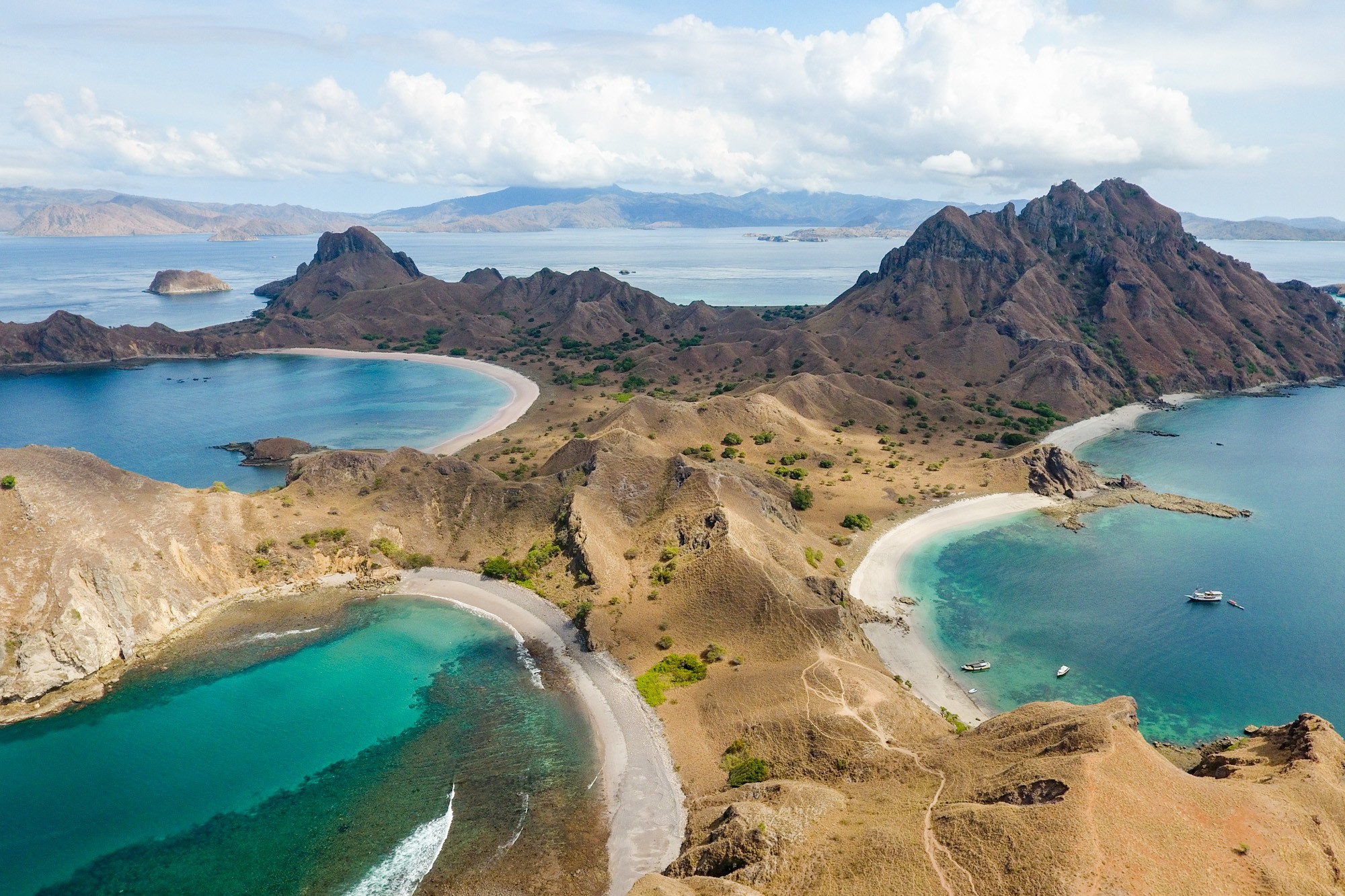 A Day Trip to Komodo Island, Padar and Pink Beach The Gateway to Komodo: Labuan Bajo

Once a quiet fishing village, Labuan Bajo has become a thriving tourist center for those setting out to Komodo National Park. 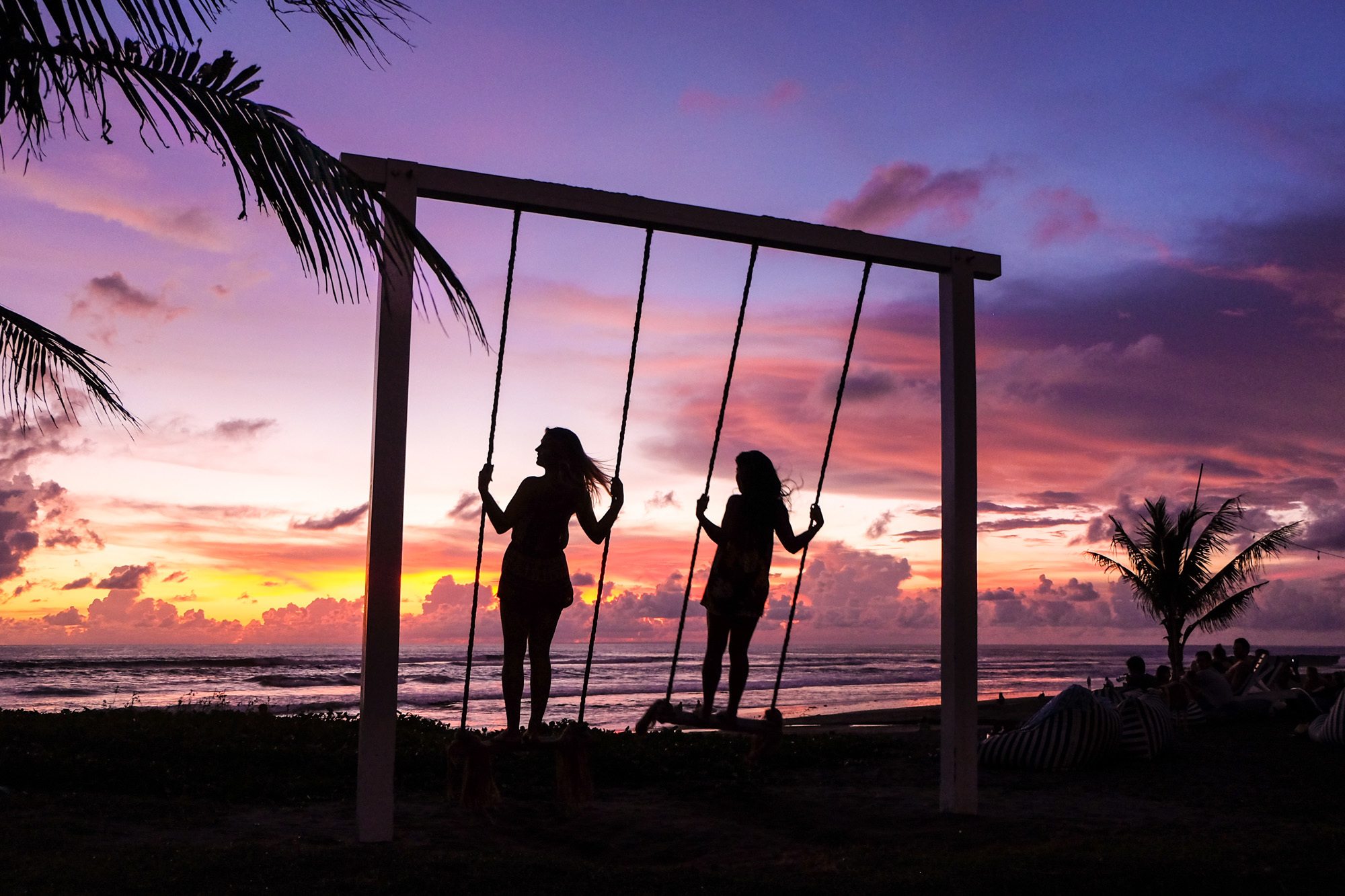 20 Photos to Inspire You to Visit Bali 10 Incredible Adventures to Have in Indonesia

With white-sand beaches, turquoise seas, and lush green forests, you’ll never want to leave Indonesia-- here are ten incredible adventures to have there! 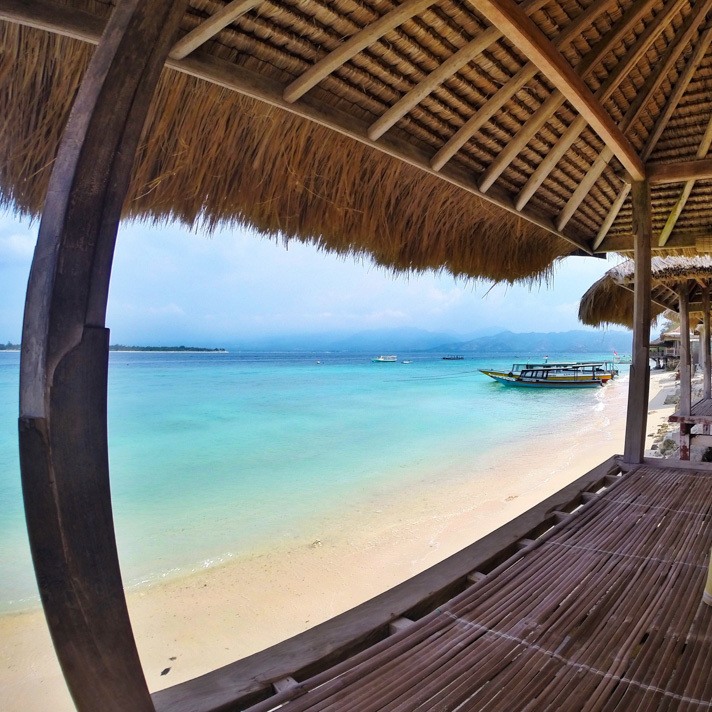 6 Reasons to Plan a Romantic Getaway to the Gili Islands

As one of the most romantic, seaside destinations we've been to, here's why you should plan your next romantic getaway to the Gili Islands! 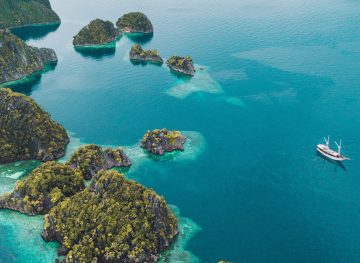 After years of diving, I finally did my first liveaboard! I spent 12 days at sea on the Raja Ampat and Banda Sea Route. Ready to find your sea legs? Here’s what it’s like diving Raja Ampat with Samambaia Liveaboard.