Located in the South Pacific and part of French Polynesia, Mo'orea is known for its sandy beaches and gorgeous places for epic animal encounters. With many hiking trails that wind through the rainforest and scenic spots, it's an ideal place to both have an adventure and seriously relax. Just a 30-minute ferry ride from Tahiti, Mo'orea is a wonderful place if you're going island hopping or to spend your entire vacation! The reef is filled with so many fish—making it a delight to see and sample at the restaurants. 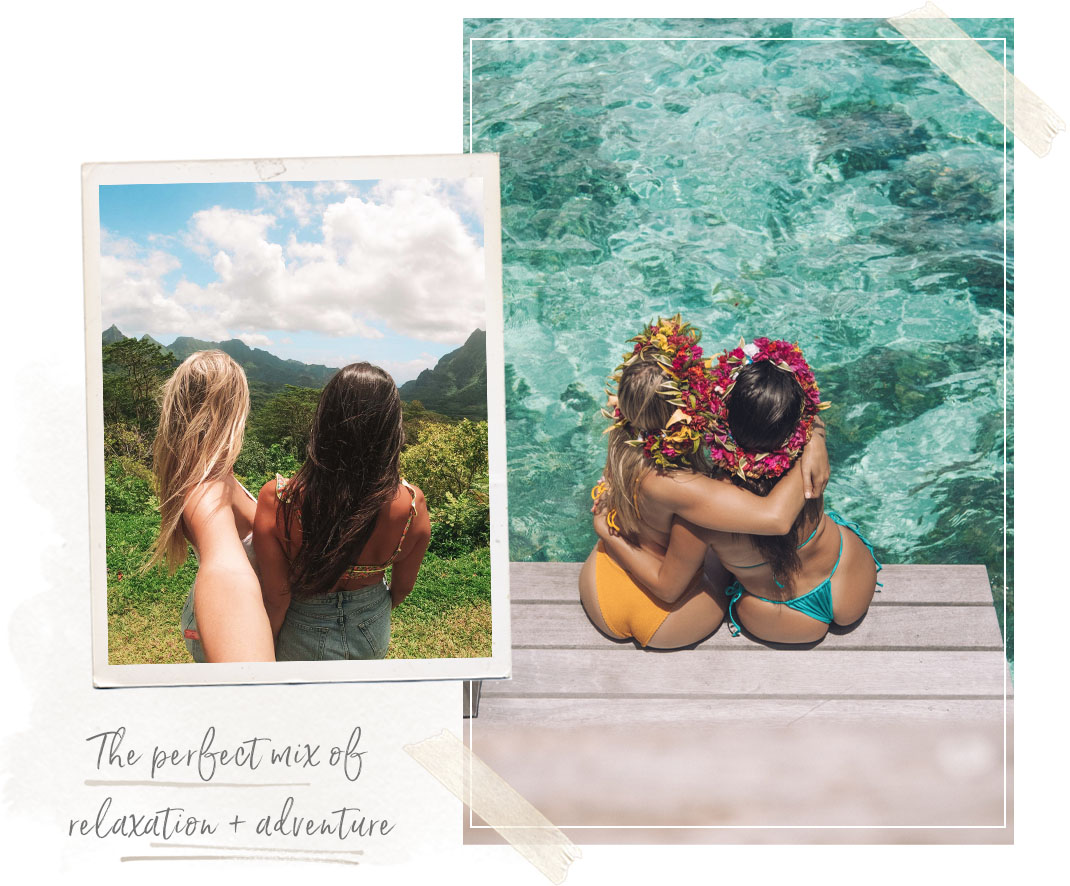 What to Expect on Mo'orea

Language: French is the official language of Mo’orea, which is in French Polynesia.

Currency: The local currency of Mo’orea is the French Pacific Franc (CFP). 1 USD is equivalent to 102.345 CFP (about 10 to the dollar is a good way to calculate on the fly). While the US dollar is accepted in some places, the exchange rate you’ll get might not be great, and you’ll definitely need to have some of the local currency for smaller purchases.

Credit Cards & ATMs: You can use your credit card at most hotels, car rental companies, restaurants, and shops on the islands. However, you should always have cash on you in case it’s not possible to pay with a card. There are only a few ATMs (called billetterie) on Mo’orea—so if you’re spending time on a more popular island, it would probably be best to get cash there (I’ve heard that the ATMs on Mo’orea can sometimes be empty, too!).

Plugs: On the islands, the power plugs are type A, B, and E. The standard voltage is 110/220 V, and the frequency is 60/50 Hz. I recommend buying a universal adapter (make sure it has surge protection) and using a converter for hairdryers and hot tools.

Safety: Mo’orea is extremely safe, though petty theft and tourist-aimed crimes can occur (there are occasional break-ins at hotel rooms and bungalows, but it’s not super frequent). Don’t leave valuables alone and don’t walk around by yourself on deserted beaches.

For pretty much all international travel to French Polynesia, you’ll fly into Pape’ete (PPT) on the island of Tahiti, and then take a 30-minute ferry to Mo’orea. We took the Aremiti Ferry to get there. What was really nice is that you can show up and get your ticket there, you don’t need to book it in advance. It’s about $15 per person, each way.

If you’re wanting to explore the island by car, it’s most likely easier (and cheaper) to rent a car on Tahiti, or from the airport, and take it on the ferry with you. I didn’t personally rent one, but I got the impression that the options are a bit more limited on Mo’orea. That said, if you do want to rent a car once on Mo’orea, I would do so well in advance!

It’s quite popular to rent a scooter to explore the island that way, too! 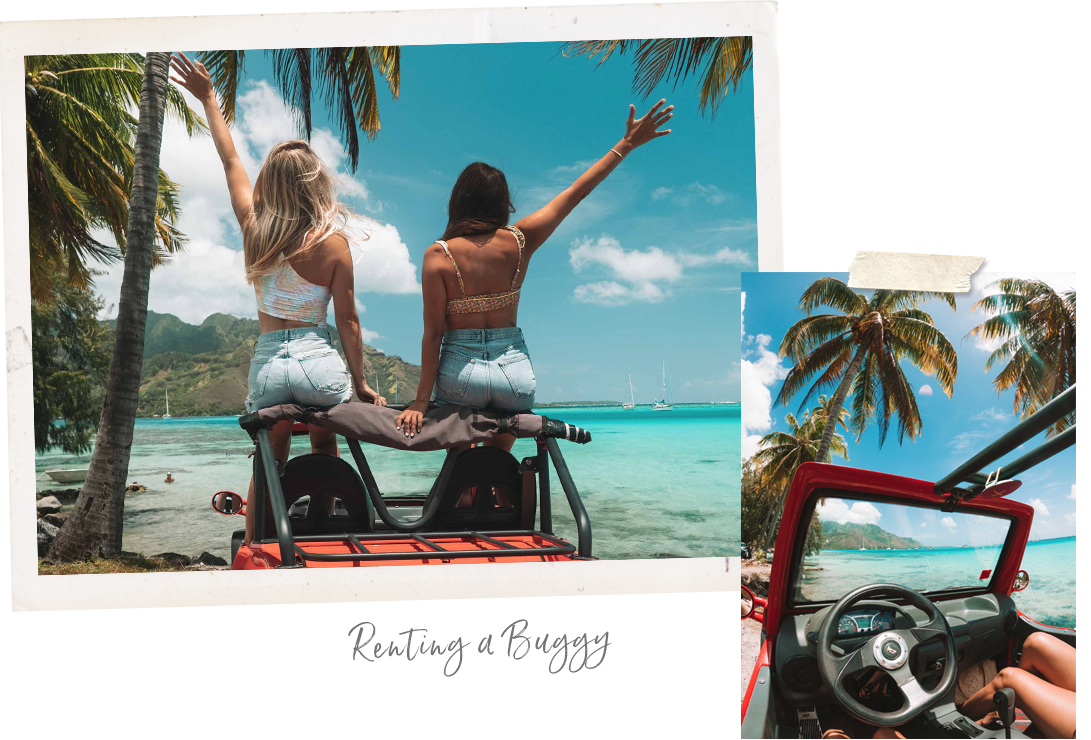 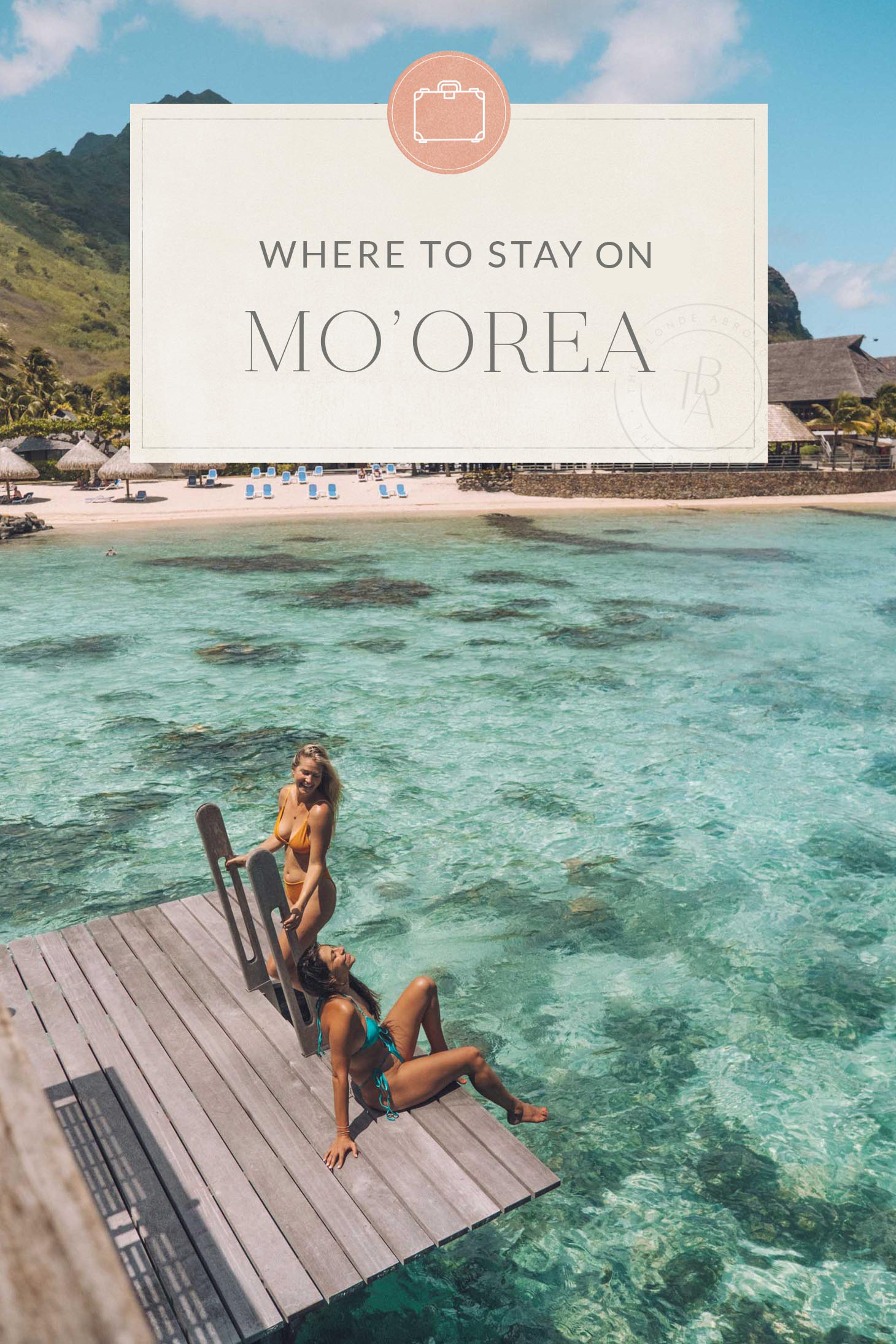 Where to Stay on Mo'orea

Mo’orea is the best island if you’re traveling on a budget—you can splurge for a beautiful resort but you’ll also find lots of guesthouses, B&B, and vacation rental options. There are accommodations options all around the island but book early as they can fill up quickly during peak tourism months.

Here are my favorite places to stay on Mo’orea!

If you’re looking to explore more of the island—especially for surfing spots—staying in a home via VRBO is a great option. While I didn’t personally do this, I’ve had a number of friends who found great rentals on Mo’orea that had some super cool vibes.

There are some STUNNING private homes that are available and more affordable than a hotel! 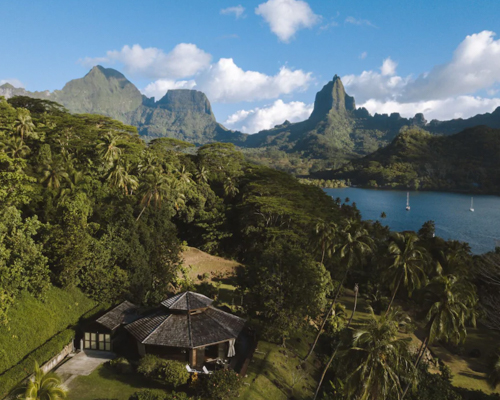 Best for Romance: The only two major hotels on the island are Sofitel and Hilton, and I stayed at the Hilton. While the luxury level is not comparable to Bora Bora—it was nice—but don’t expect anything 5-star. None of the accommodations on Mo’orea are super fancy so these two are the highest-end places you’ll find.

Best for Relaxing: Located on the North-East Coast of the island, this is one of the best places for relaxing as it’s built on the longest white sand beach of the island and has an 18-hole golf course, to boot. From the hotel, you’ve got a panoramic view of the lagoon and of Tahiti. 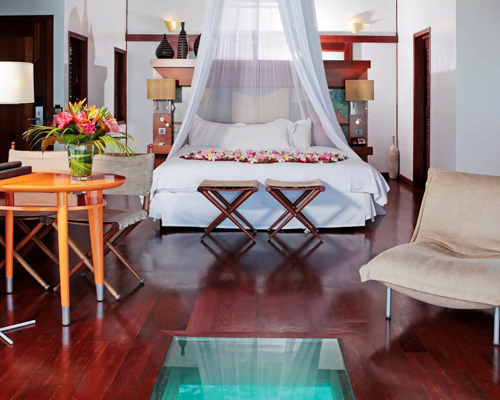 Best for Surfing: The Happiti district of Mo’orea is protected by a barrier reef that’s about a mile offshore. There’s an opening in the barrier that allows for surfers to go out deeper, though the size of the swells can be quite impressive (and not suggested for beginners). 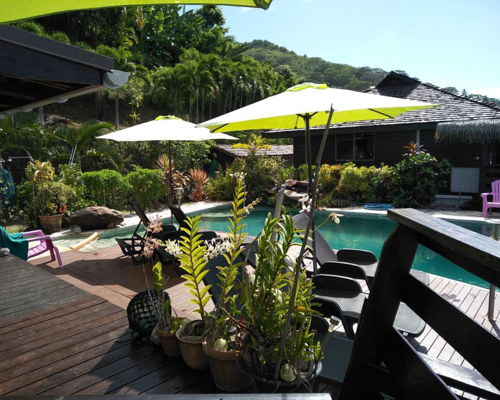 Best for Budget: Relax at the Hotel Les Tipaniers without breaking the bank—though there are some places you can find for slightly cheaper if you’re on a tight backpacking budget, this hotel is both budget-friendly and has all those cool island vibes. 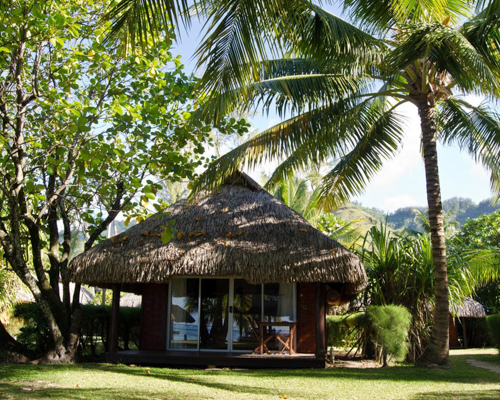 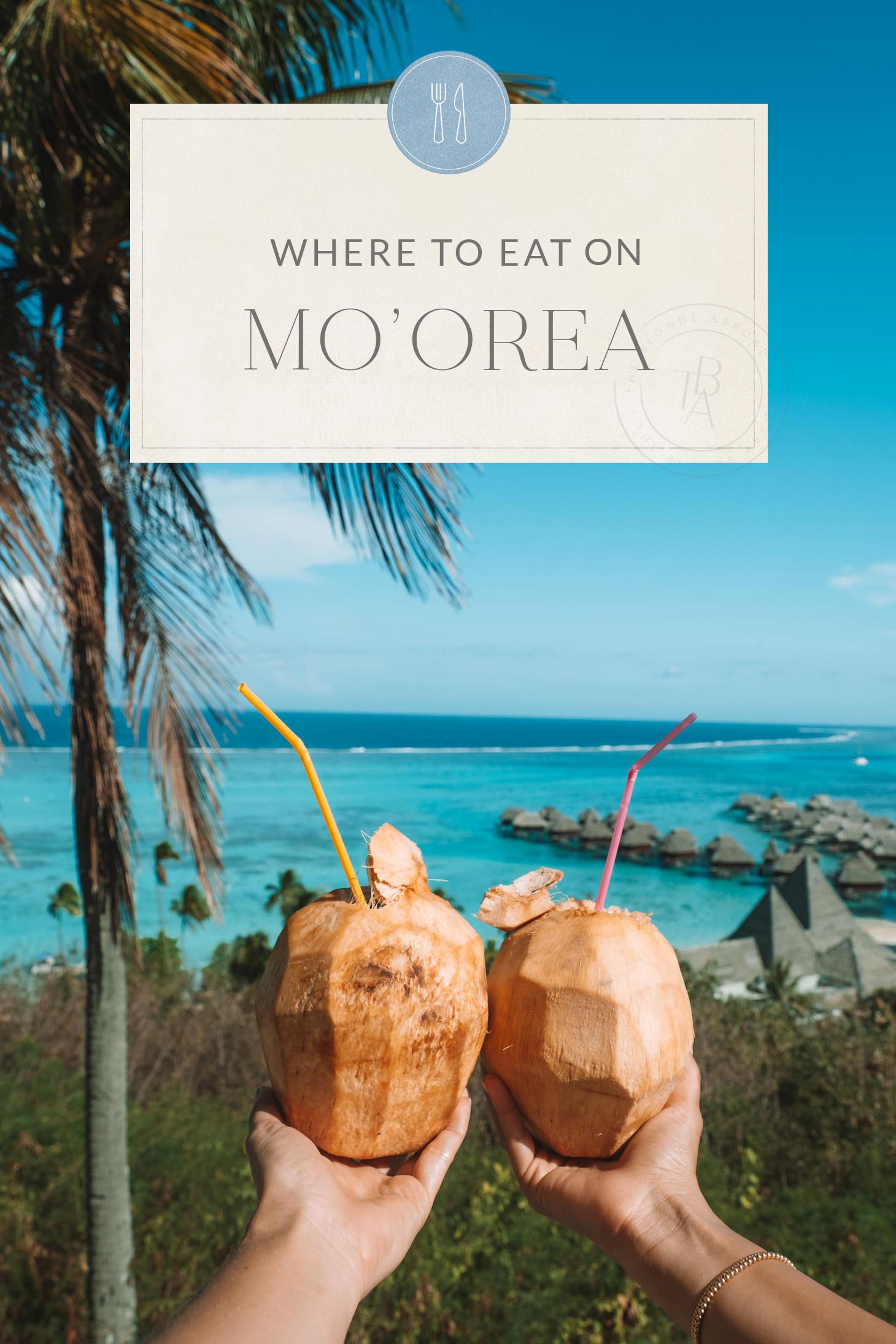 Where to Eat on Mo'orea

You’ll find a lot of crossover with French cuisine when dining across the islands, and you won’t find fresher seafood than the locally, daily caught options.

One of my all-time favorite seafood dishes can be found across the Tahitian Islands. The dish you absolutely must get is Poisson Cru—it’s a typical Tahitian dish of raw fish served in a coconut-y lime juice with shredded carrots, cucumber, tomato, and served with white rice. It’s very fresh and super flavorful. I could eat it every day (and I did, wherever I could find it).

I’ve compiled the best restaurants to eat at on Mo’orea!

This cute, casual bar and restaurant is the perfect lunch spot in Ha’apiti! Grab a cold beer or espresso and snack on pizza or delicious Uru fries while chatting up the friendly bartender. 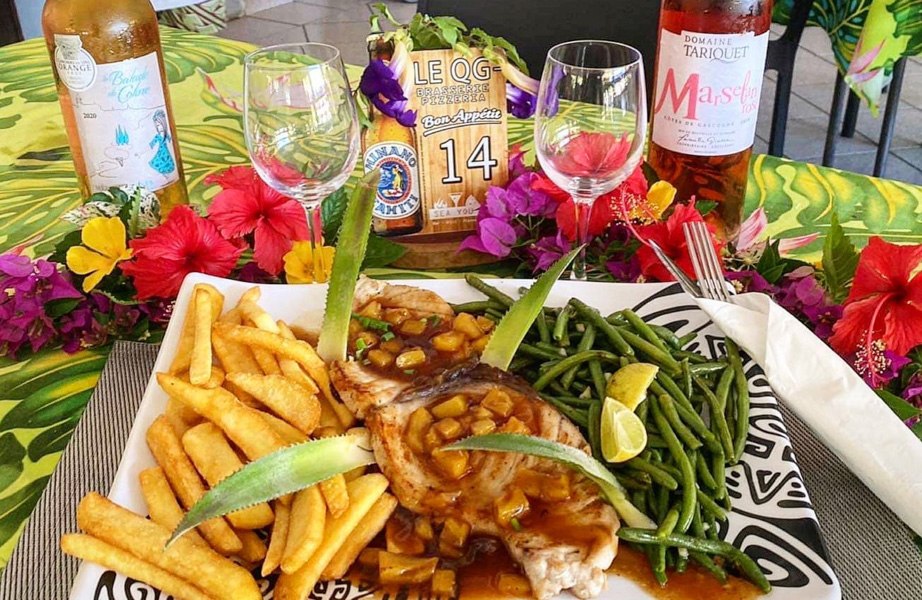 Rudy’s was mentioned numerous times to me by locals while exploring. While I didn’t eat here, it’s quite well-known and popular! Check it out during your trip.

If you are looking for something upscale or somewhat nice, the Moorea Beach Cafe is the spot for you. It’s got a sort of beach club meets yacht club vibe, so you could dress up to go here. While the food is just above average, the views and ambiance are 5-star. 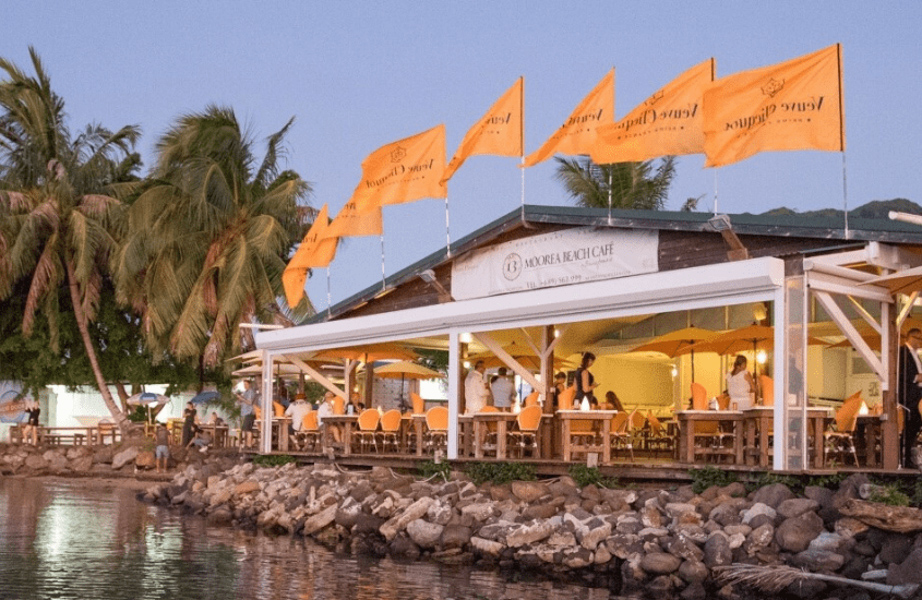 Te Honu Iti (Little Turtle) is a lovely French restaurant on Cook’s Bay. The chef, Roger, is extremely sweet and the staff was the most personable and hospitable on the island that I experienced. The food is a little pricey, but every table is on a deck above the water and you can see sharks and rays swimming around.

Go here and thank me later—you have to try their poisson cru too! The Poisson Cru at Snack Mahana either has ginger or lemongrass in it and it was by far the tastiest thing I had. They’re very accommodating, and the restaurant has a beautiful deck. We stopped there on our big sightseeing day while exploring the island by buggy! 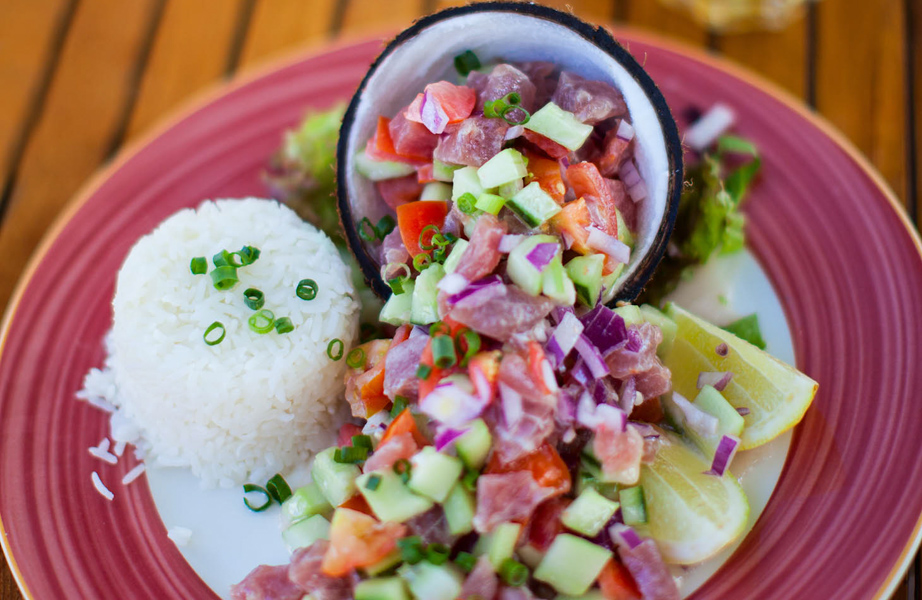 Lastly, there are a number of random pizza shops around the island and you might just stumble upon something pretty tasty! 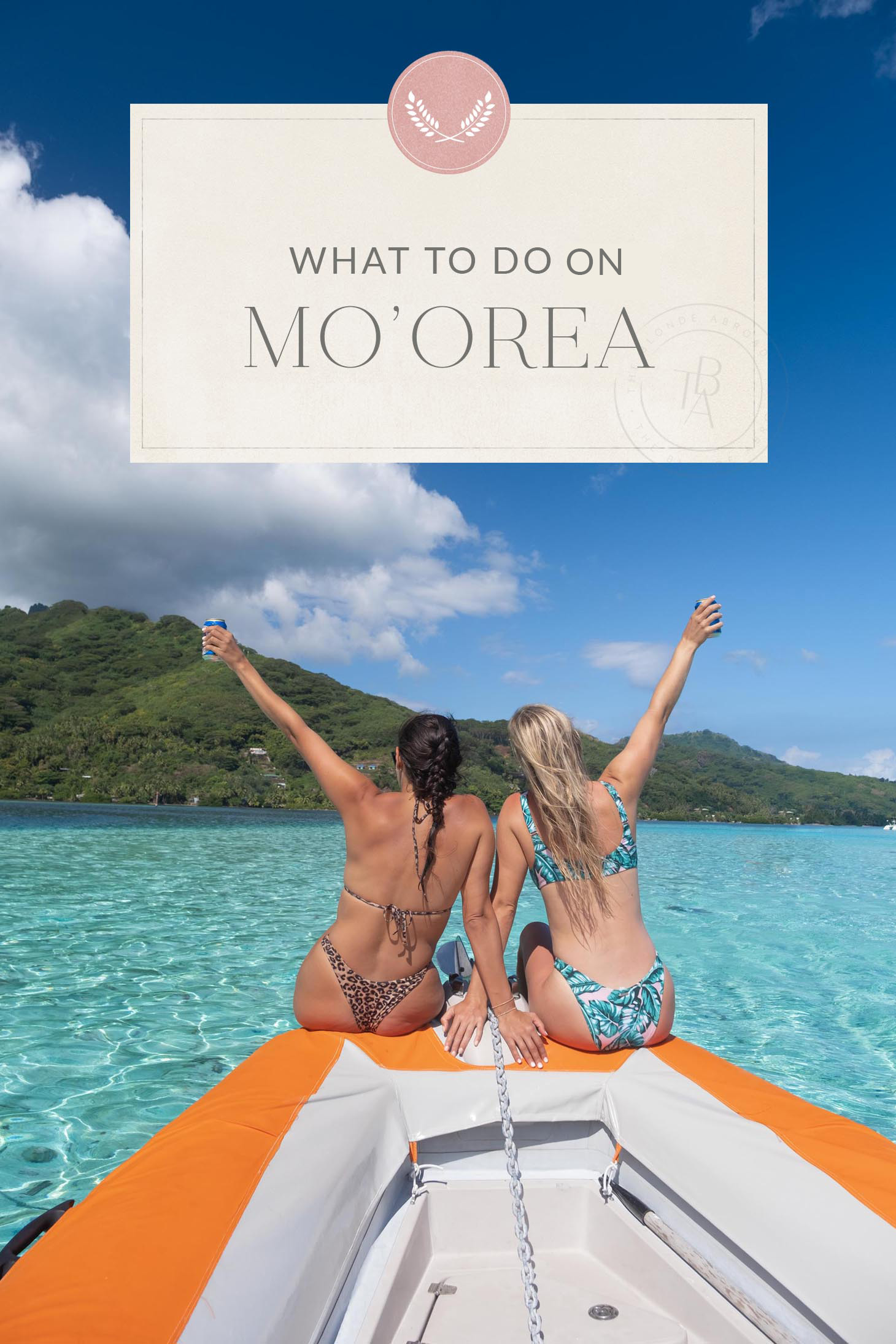 What to Do on Mo'orea

Mo’orea is a dream destination for white-sand beaches, lush rainforests, and exotic animal encounters. Of course, the biggest draw is the tropical water—if you enjoy a dip in the ocean, consider adding a boat trip or snorkeling excursion to your itinerary!

I’ve listed my favorite activities on Mo’orea below, but you can find more of the Top Things to Do on Mo’orea here!

Between July and early November, you can go snorkeling and see the humpback whales! During these months the whales can be seen near the outer reefs as they look for a mate or nurse their little ones.

From both an ethical and experience standpoint, I would recommend booking a private charter to do this — one) because they are wild animals, and two) large groups of people are not ideal when encountering animals like this. A more private experience helps manage safety for you and the animal and limits the crowds.

We went through Tahiti Shark Expeditions and booked a full day, which was 8 hours, and lunch was included. They do offer a half-day tour, but I would recommend doing a full day so you have as much time as possible.

The great thing about this is if you’re traveling with a friend, partner, or small group—you can split the price of the charter. Plus, they’re completely on your schedule if you want to go hang out in a lagoon and swim around, or if you want to search for dolphins and whales. You get to choose what you do. 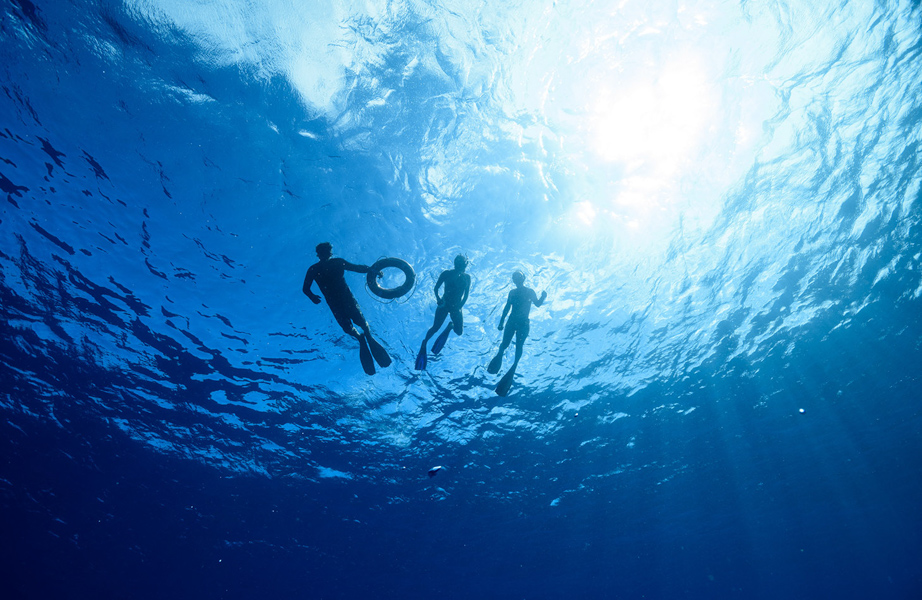 Even if you’ve rented a car, you might want to rent a beach buggy for the day for a true adventure! There isn’t a roof, but there’s a tarp if you’d like some shade (more than what a scooter would provide).

I loved that it had Bluetooth speakers and a bit of trunk space for a beach bag. This was a definite highlight and made for super cute photos! 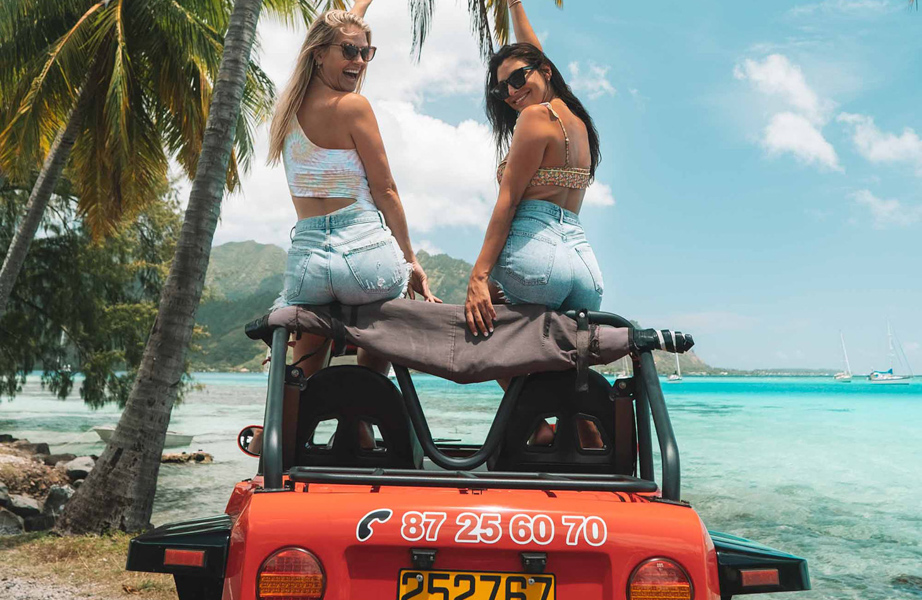 There are a number of farmers’ markets and fruit stands all over the island. You can find folks selling coconuts, mangoes, fresh local food, and an assortment of crafts. Bring cash when visiting these places!

Belvedere Lookout is a famous stopping point, known for being a picturesque lookout with absolutely gorgeous views of the mountains and bays. 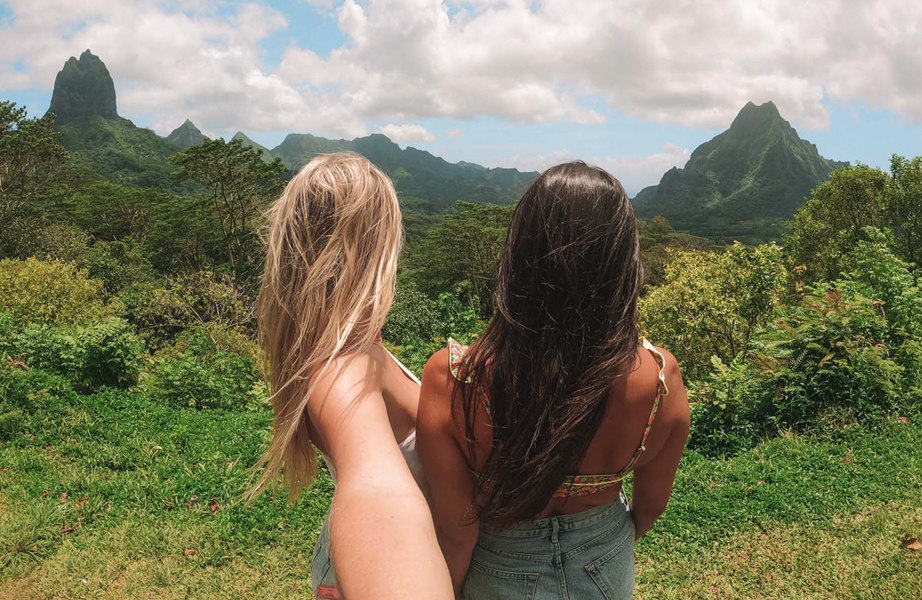 We truly leaned into relaxing while on Mo’orea—from the beaches to the many spas, take the time to chill.

Surfing, jet skiing, snorkeling, and diving are all popular things to do around the island.

If you’re visiting multiple islands in French Polynesia, you can get a dive pass with a company called Top Dive. I got my Enriched Air Certification with them on the island of Rangiroa. You can pay for X amount of dives and go to any of their dive shops on the islands, which is quite cool if you’re visiting more than one island. 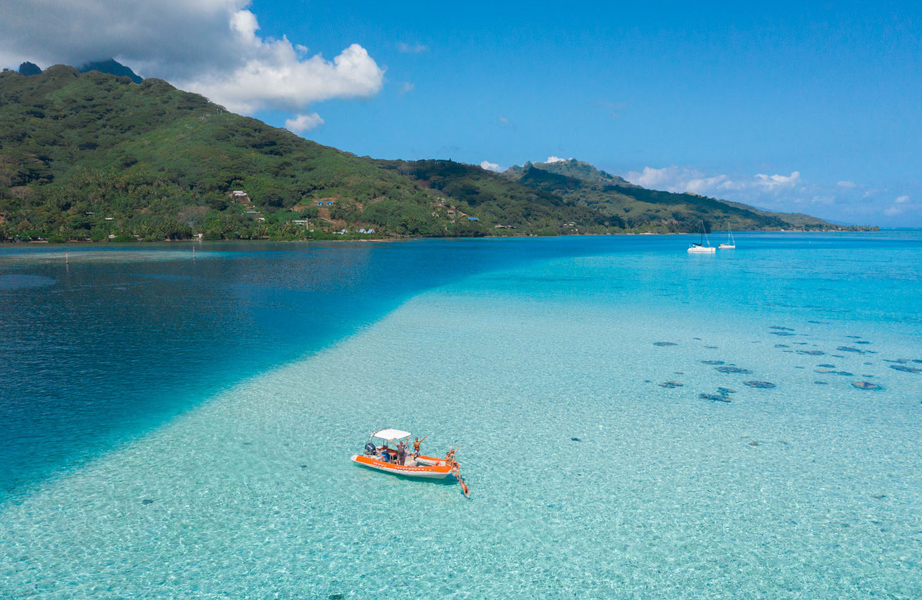 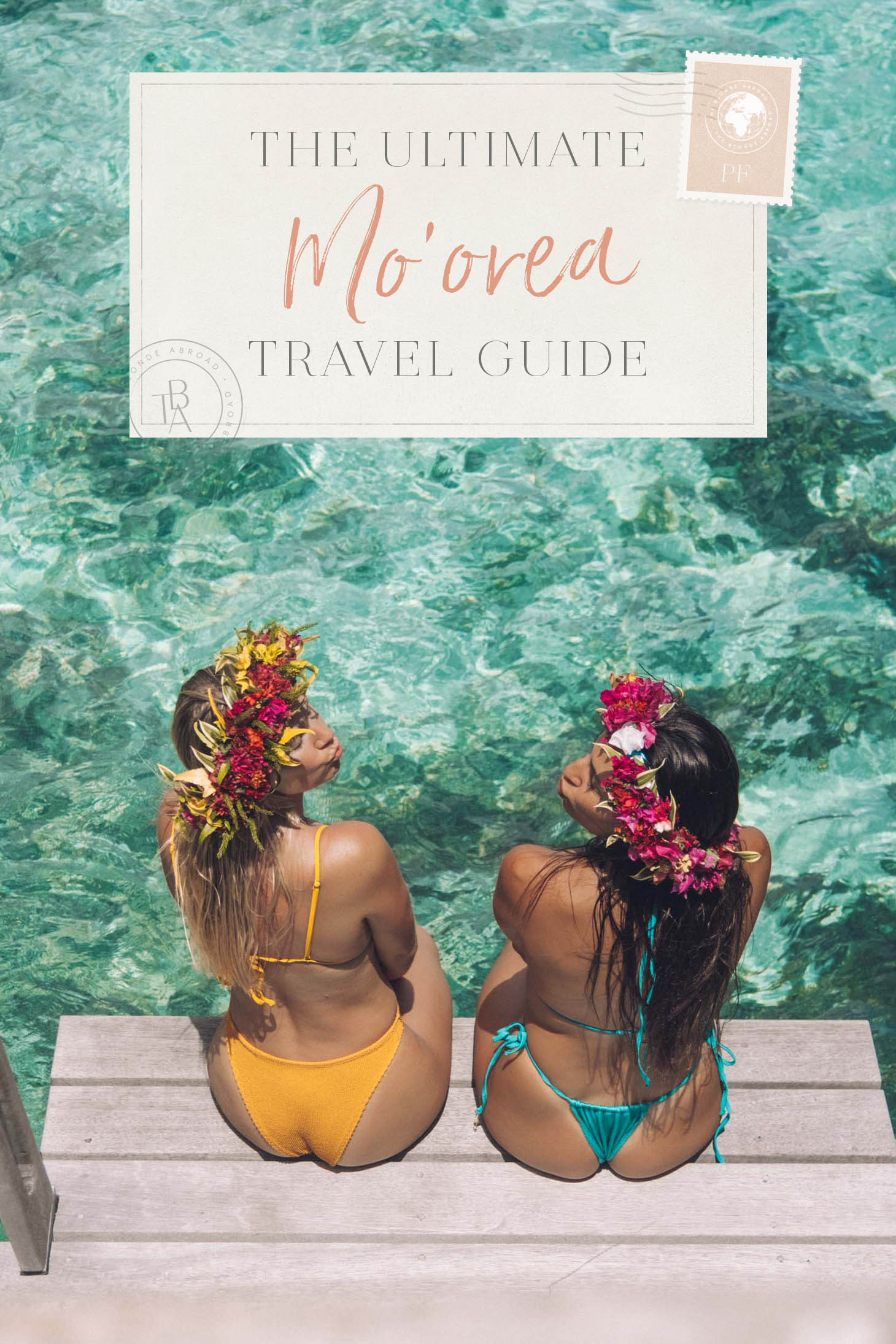 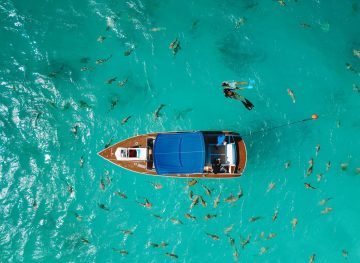 From Bora Bora to Tahiti - French Polynesia is the ultimate island destination. Here's everything you need to know to plan your getaway to paradise! 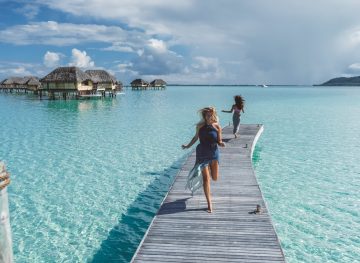 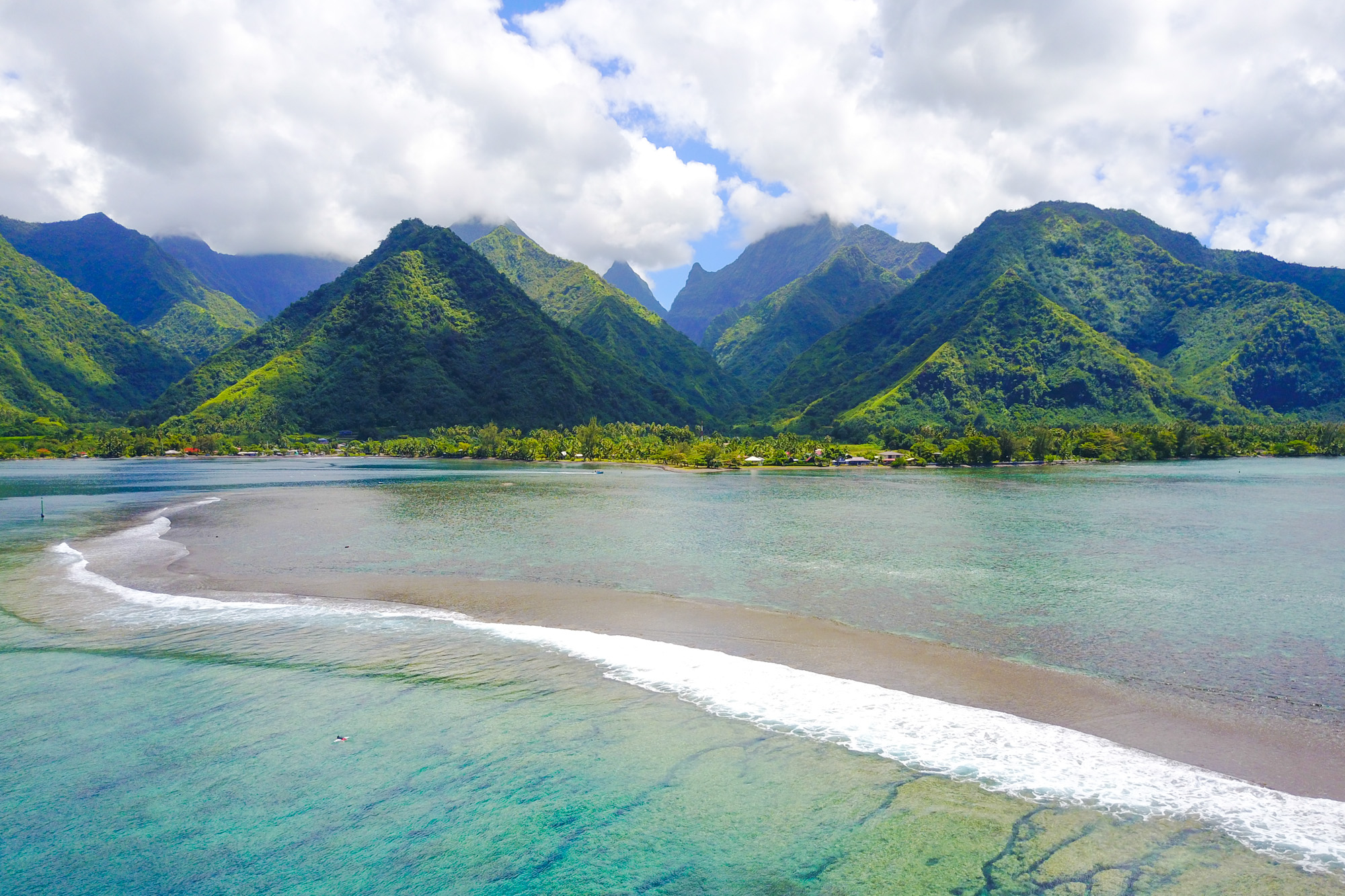 From Taha’a to Rangiroa to Tahiti, there is an endless array of adventures and new experiences just waiting to be had in French Polynesia! 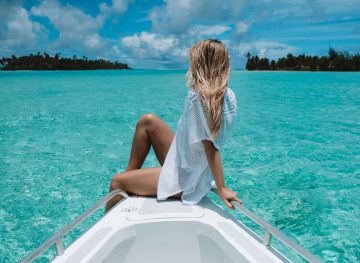 20 Photos to Inspire You to Visit French Polynesia

You have never seen sparkling turquoise water and flawless beaches until you've seen this place. Here's 20 photos to inspire you to visit French Polynesia! 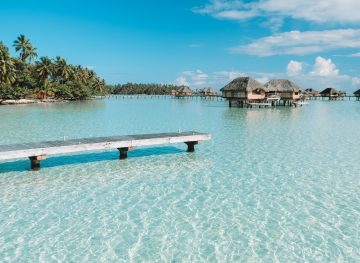 Tips for Getting to French Polynesia 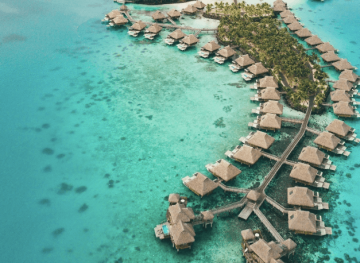 Whenever I visit French Polynesia, it takes my breath away & this was no exception. Here's my overview of staying at the Conrad Bora Bora Nui in Bora Bora. 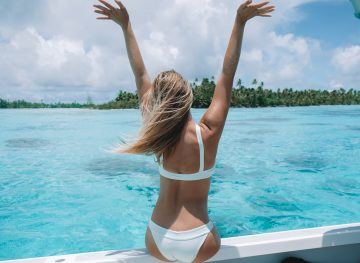 The Best Time to Travel to French Polynesia 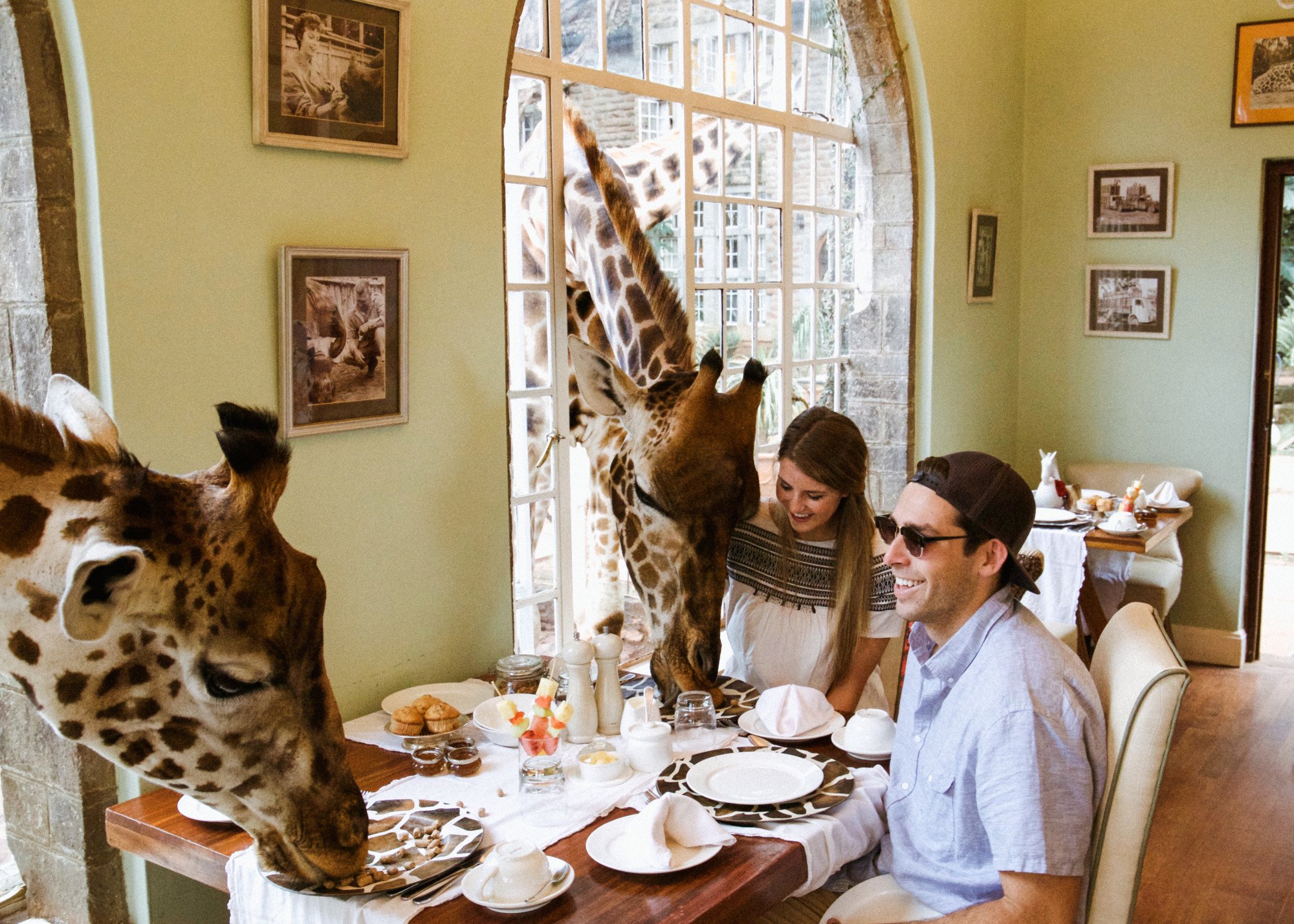 If you’re like us, your honeymoon will spark feelings of wanderlust and begin a lifetime of travel together-- here are top luxury honeymoon destinations! 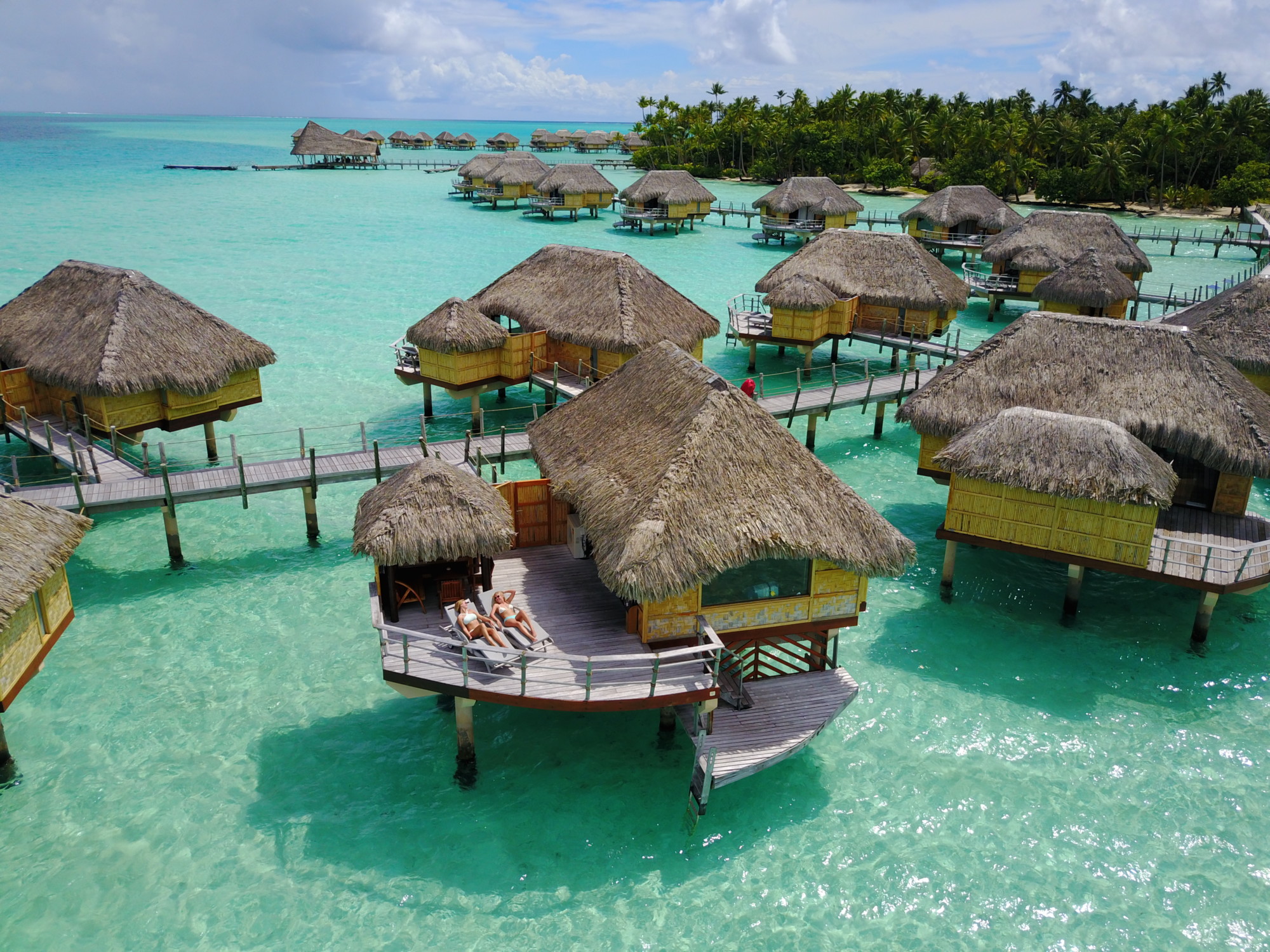 Visiting French Polynesia has always been a dream of mine, and Le Taha'a Island Resort & Spa definitely is a place that lives up to the hype!