Amsterdam is one of the most popular and fascinating destinations in Europe. A world-class foodie destination (check out my must-eat Dutch foods before you go) with a dynamic culture and layered history, this is an essential stop on the continent.

While the famous “I am Amsterdam” sign is no longer there, it was just one of the many iconic experiences to be had.

Truly, Amsterdam is so much more than its party scene. And the Netherlands is far more than Holland! While a lot of people call the whole country “Holland,” there are actually 12 provinces. But, before we move onto the wider area, let’s talk about the ultimate Dutch destination: Amsterdam.

Here are the 10 things you must do in Amsterdam! There is a reason why they call Amersterdam the bike capital of the world. One of the Netherlands’ biggest claims to fame is having an average of 1.3 bicycles per person, which is more than any other country on the globe.

To get the feel of local life, ride a bike around the canals. Just watch you don’t fall in! Around 15,000 bikes are excavated from the canals each year. 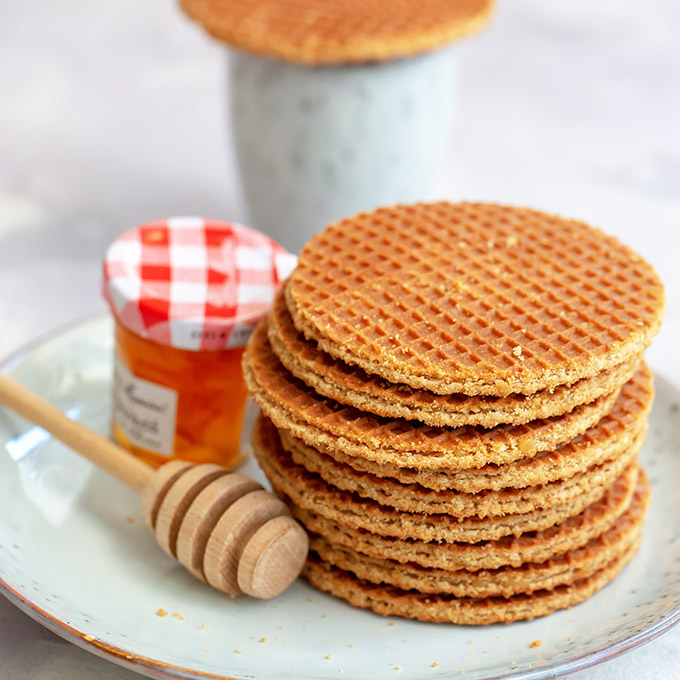 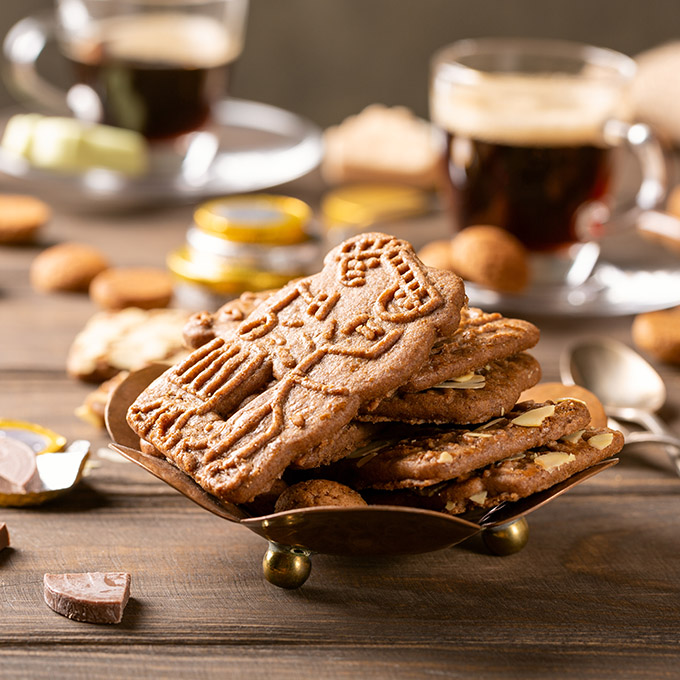 I would highly recommend trying a food tour!

I find them to be the best way to try the local food. Wherever you go and whatever you try, there are bound to be dishes you prefer and others you dislike. A food tour will let you try a bit of everything without missing out or getting so full that you are bursting at the seams.

While I’d definitely recommend trying the local cuisine, at minimum, you’ve got to be sure to sample stroopwafel at least once (though once you get a taste, that’ll probably turn into four or five times!). Museums are an essential component of any trip to Amsterdam. The Rijksmuseum in Amsterdam, Van Gogh Museum, and Anne Frank Museum are absolute must-sees.

Amsterdam is one of the more expensive cities in Europe and the cost of visiting tourist spots like museums can add up quickly so I’d highly recommend looking into the I amsterdam City Card. It gives you free transport, entry into more than 70 museums, and a one-hour cruise through the city. 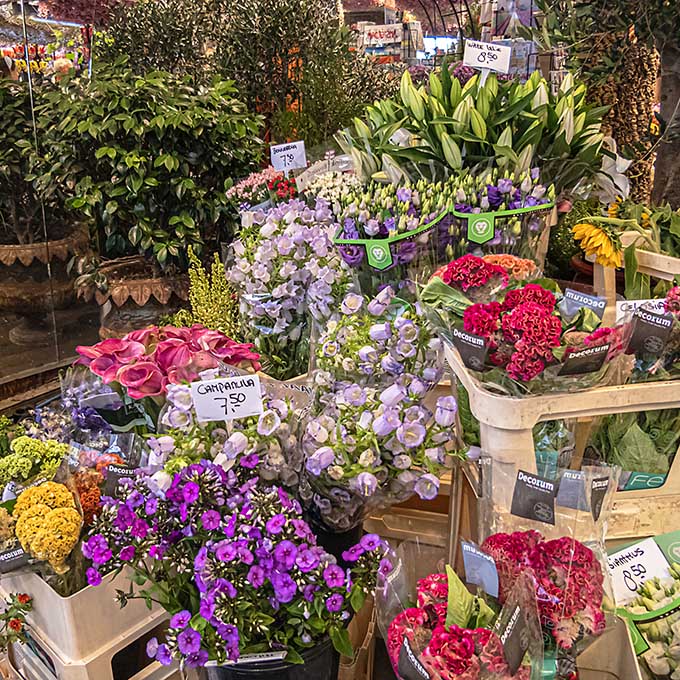 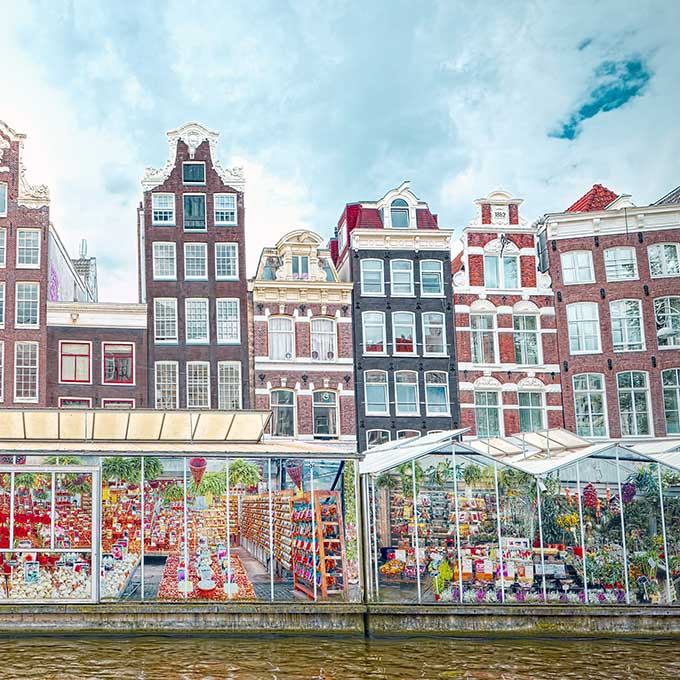 The only floating flower market in the world, Bloemenmarkt is an absolute treasure. Wander through the barges and pick out your own bouquet from the flower capital.

The history of the floral world of Amsterdam is actually way more interesting than you’d think and well worth reading up on. The Tulip Mania that eventually led to the 1637 tulip market crash is a story you’d only find in the Netherlands.

If you are lucky enough to visit the Netherlands from late March to mid-May, be sure to make a trip to Keukenhof Gardens, the world’s largest flower garden park.

Wander Around the Canals

The I amsterdam City Card is an affordable way to hop on a cruise through the famous canals of Amsterdam or you can go solo.

It is equally beautiful if you go on foot or by bike too. Just plan plenty of time to snap pics as you go! 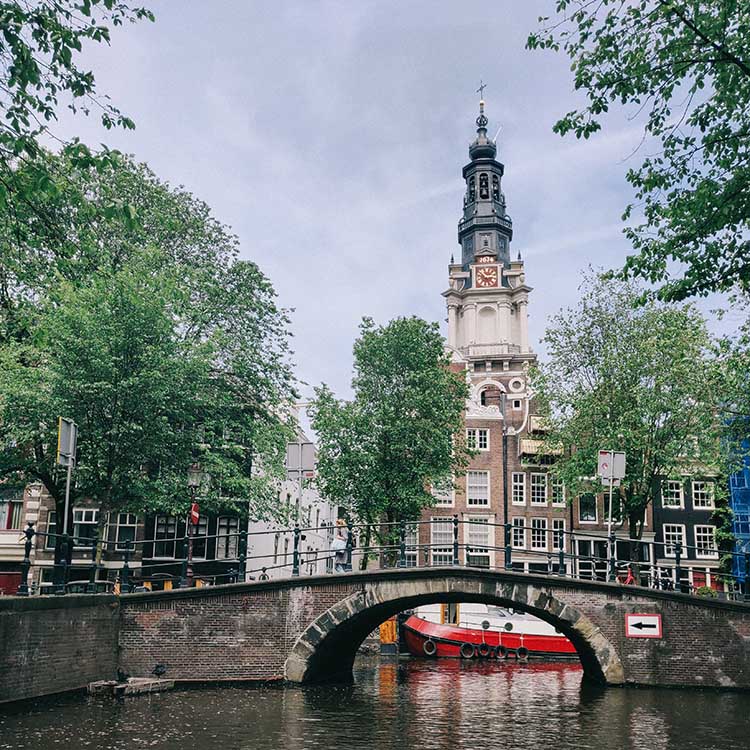 Amsterdam is home to what could easily be called the world’s most famous red-light district. While it’s not exactly my scene, I would still say it’s worth wandering around to see what the area is all about.

And it’s not all brothels! The Red Light District of Amsterdam has largely been transformed into an art and cafe district so there’s something for everyone these days.

House of Bols is one of the best tours I’ve ever been on (and I’ve been on more than my fair share of tours!).

Learn about the history of traditional Genever, which is the Netherlands’ answer to gin, and experience a one-of-a-kind cocktail experience. Watch my video on my experience there to get an idea of what to expect. 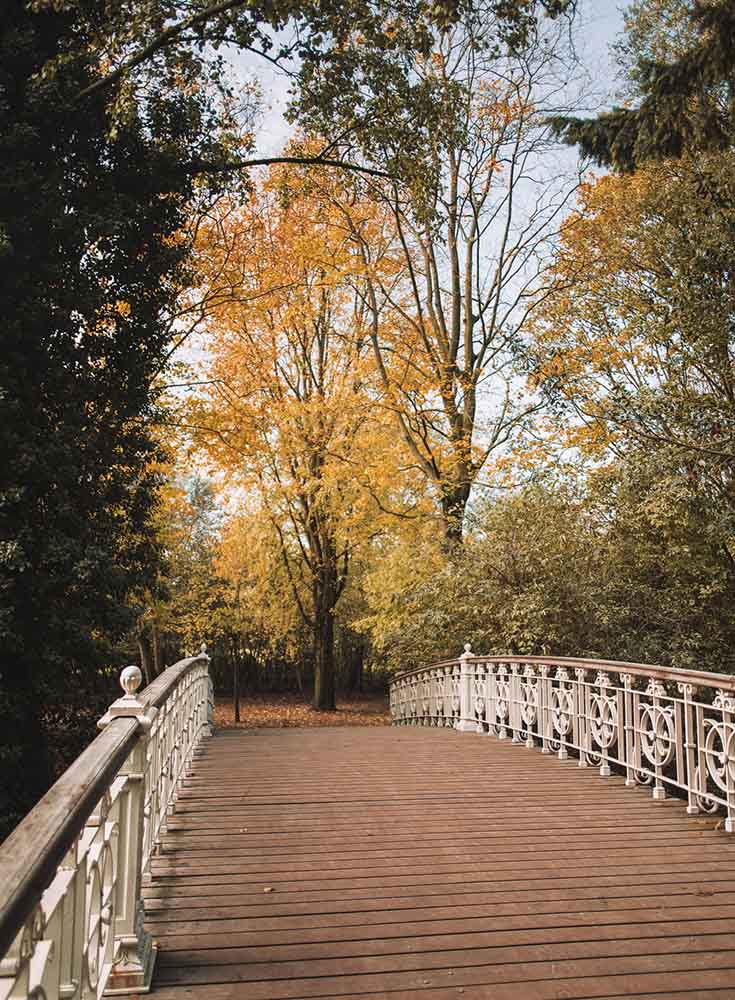 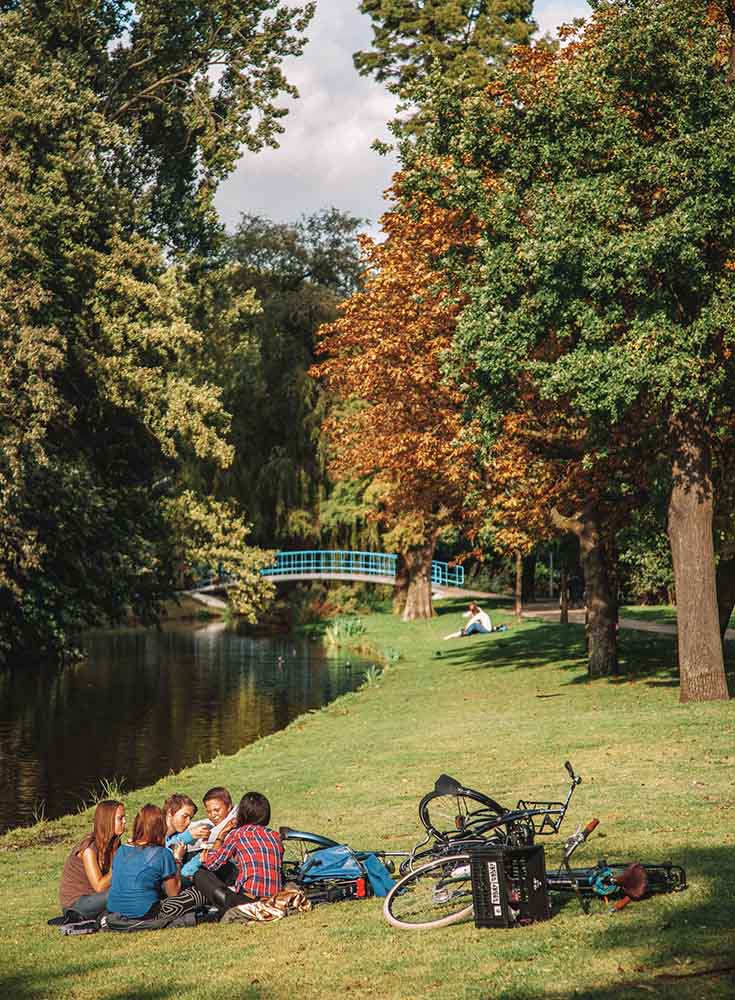 Have a Picnic in Vondelpark

There is nothing more quintessentially Dutch than to ride your bike over to Vondelpark for a picnic. Pack some sandwiches and salads or stop by the eatery in the park, Proeflokaal ‘t Blauwe Theehuis. They have amazing food and are famous for their tea selection as well.

The days of the Dutch trading empire are gone but the love of a good barter remains.

In the heart of the De Pijp neighborhood, you’ll find the Albert Cuyp Markt. It is where locals go to load up on fresh produce and meats every week as well as to grab a bouquet of flowers, have some lunch, and shop for knick-knacks…like the wooden tulips pictured!

It is a prime place to find a souvenir (and, yes, bartering is expected)! 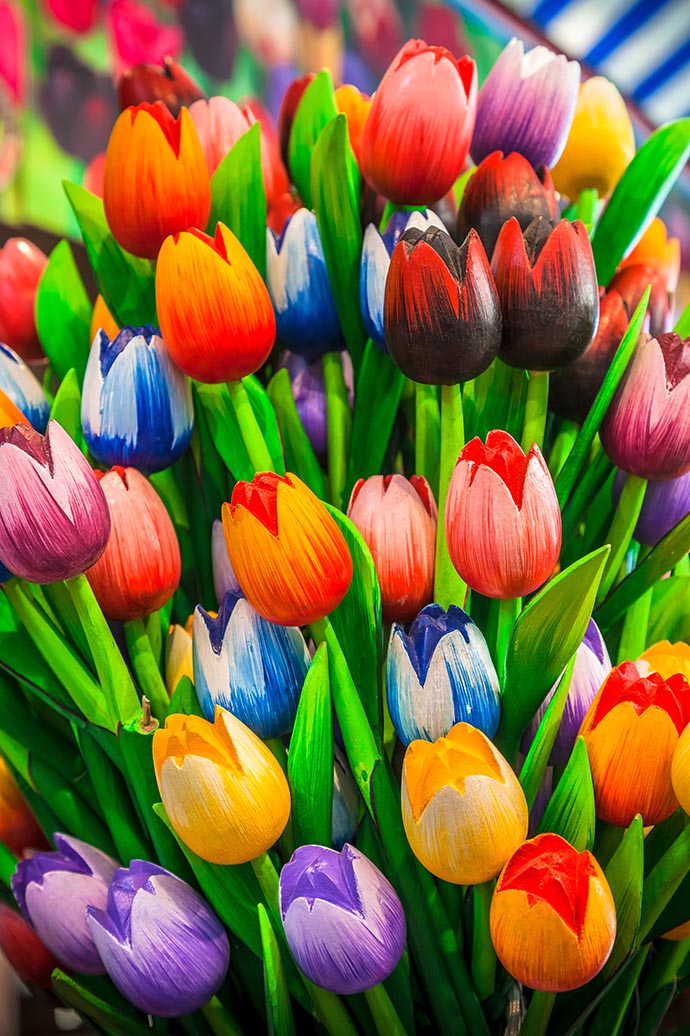 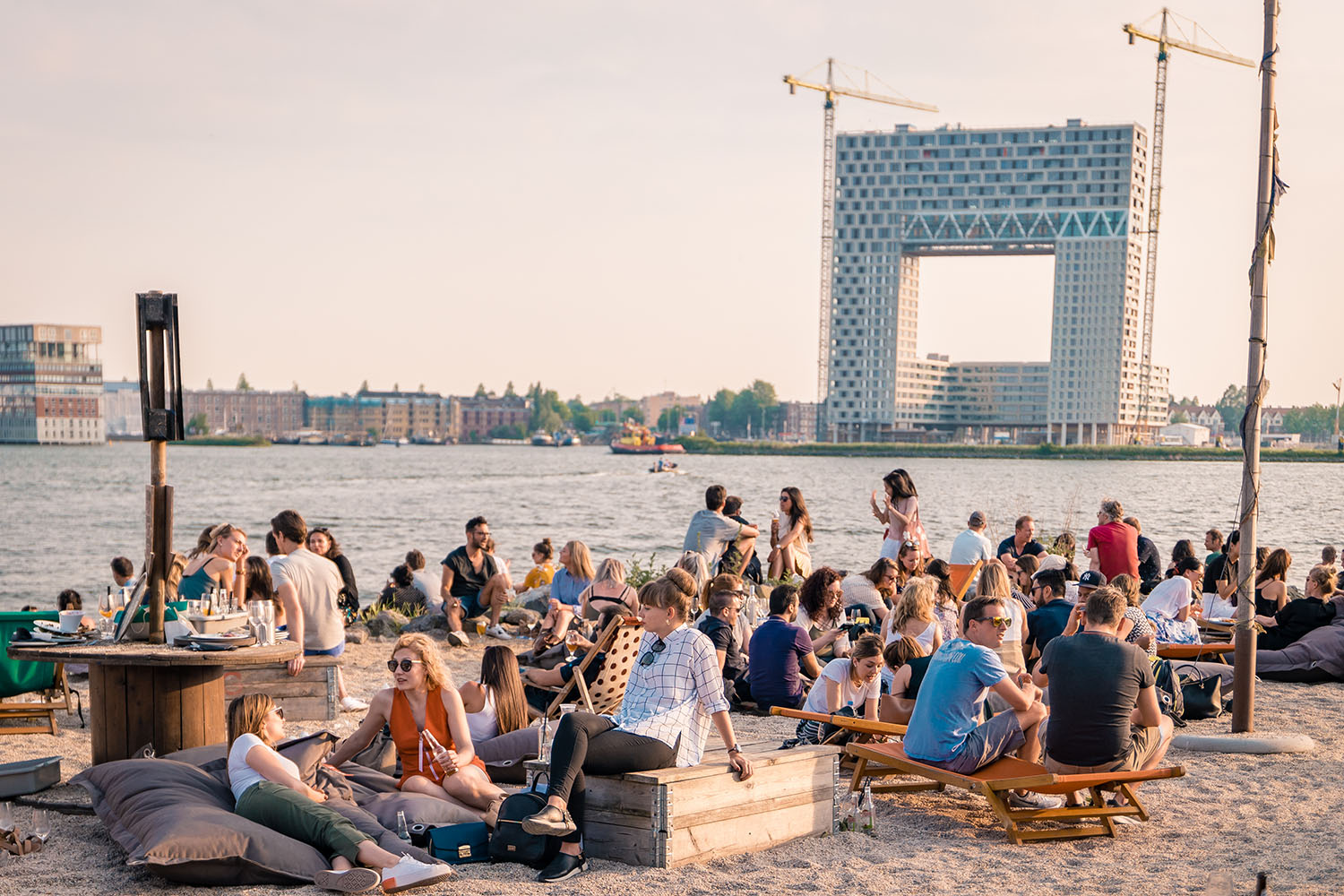 Beside the River IJ, the NDSM Wharf is a former shipyard turned hip hangout.

There is a free ferry that runs back and forth from Centraal to here. When you arrive, you’ll find cool little cafes and happening restaurants. Chill on the beach for a few drinks then explore Europe’s largest flea market, which happens once per month. Check out their website to plan your trip.

If you love second-hand markets and shops, you are going to be in heaven on April 27, King’s Day, when a whopping one in five Dutch people sells their wares on the street at the flea market to end all flea markets.

Amsterdam is in the process of adding 2,000 houses in the area to establish a ‘district for urban pioneers’ which is a cool concept to bringing a creative vibe to a city that can feel overly touristy at times.

Have you been to Amsterdam before? What would you add to this list? I’d love to hear in the comments below!