Fights are an inevitable part of any relationship.  No couple is perfect and no couple is without their own issues.  Stress, unfortunately, is an impetus for fighting.

While traveling, you’ll undoubtedly be placed in stressful situations as unexpected scenarios arise and you and your better half are tasked at working as a team to find a solution.  Don’t be naive and think, “We will never fight when we are traveling.  Everything will be so perfect, why would we fight?”.

So don’t worry about things that are out of your hands, rather focus on things you have control over.  Stay conscious, and focus on positive resolutions that provide a reasonable outcome to any fight, argument, or disagreement that arises.

Accept that fights will happen, even on the road, and follow these steps to dealing with fights while traveling as a couple! Most of the fights we have had on the road are due to an increased stress level.  It’s a lot easier to snap at the one you love when you’re about to miss a flight or you’ve just had your bikes stolen.

Take a deep breath (or 10) and stay conscious.  Everything will be fine. If you spend too much time with someone you’re more susceptible to fighting.  Minuscule, tedious things will start to get on your nerves for no reason at all.

So spend time apart.  Maybe it’s you going to the gym or playing basketball while she goes to yoga. Maybe it’s a beer by yourself at a sports bar while she gets her nails done.  Or maybe she’s drinking the beer and you’re getting the pedicure?

Whatever it is, spend some time apart. Missing each other is nice. Treat the person you love exactly like that.  For a relationship to be successful, and to properly handle fights while traveling, it is imperative you treat your significant other with love and respect.

You may have won him/her, but never stop courting. Never lose the romance and those butterflies in your stomach. 4. Be OK with Being Wrong

…even when you know for certain that you’re right

There will be that one time out of a million where he/she laughs and admits that he/she is wrong but most times our egos get in the way and we attach our sense of identity to a particular position we hold.  If your position is seen as being “wrong,” you take personal attack.

Stop being so infantile, detach your sense of identity from your convictions and be ok with being wrong…even when you know 100% for sure you’re right.  Is being right really worth the fight?

Funny enough, if you’re not combative and you let the topic go, your significant other might do some thinking and acknowledge you were right.  Either way, it really doesn’t matter. 5. Be Mindful of One Another’s Emotions

If you notice your significant other is stressed, homesick, or just plain out of character, either give him/her space or console him/her.  You ought to know what is generally the best solution, depending on your mate. There are a few things everyone hates while traveling.  The first is probably a crying baby on an airplane and the second is probably a fighting couple.  Public places aren’t a forum for you to interview for the Jerry Springer show.  Find a private place to sort out your matter.

Now please realize that we aren’t perfect.  We have an incredibly healthy and loving relationship, but we also fight about some stupid stuff sometimes.  We do, however, do our best at applying the 6 aforementioned tips and generally our disagreements are quickly resolved and we are back to kissing and joking with one another.

If you have any other tips for how you handle fights while traveling, feel free to share in the comments.  We would love to hear from you! 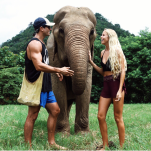 Hey y’all! We’re Michael and Alexandra Gallagher from Couple’s Coordinates! We provide TBA readers with couples travel tips, romantic getaways, travel guides, honeymoon suggestions, and anecdotes from our journey around the world together.