This post was written by Sivan, our Student Travel Expert!

Cádiz is a well-known beach town in Southern Spain. It’s a small city, but it is a big hub for cruise ships and other travelers. If you’re looking for a little getaway from Seville…

here are some ideas for a day trip to Cádiz from Seville! There are trains that run to and from Cádiz all day from different cities. I traveled there from Seville, and my train ride took about two hours.

If you’re traveling from farther away, the train between Barcelona and Cádiz takes about seven and a half hours, while the train from Madrid takes about four hours. You can also fly into the Jerez Airport which is just about thirty minutes outside of Cádiz. What to Do in Cádiz Where to Eat in Cádiz

Cádiz is a pretty small city, and if you choose to skip visiting the beach, you can finish up most of the best activities in a short amount of time. To fill the rest of my time in the city, I decided to design my own food tour.

The traditional way to eat in Spain is to order tapas, which are small plates of food. Instead of ordering lots of tapas in one place, I ordered one or two plates in a bunch of different restaurants. Each of these places is within walking distance in the city. (And the walks make the perfect break in between all the indulgence!)

Cádiz shows off the best of the southern Spanish culture from the food to the religious history. Whether you are relaxing on the beach or touring the city, Cádiz makes for the perfect day trip from anywhere in Southern Spain!

Do you have any tips for Seville? Let me know in the comments! 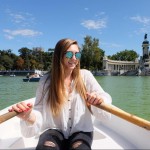 Hi I'm Sivan! I will be sharing my studying abroad experiences and travel tips from around the world with you. From weekend getaways, to traveling on a student budget, here are my budget-friendly travel tips and guides!