Mt. Huashan is a gorgeous mountain area in Xi’an, China that enjoys a healthy amount of tourism because of its stunning temples, generous vistas, and notoriously dangerous hike to the summit.

For centuries, the mountain has been a point of pilgrimage for pious monks and devout Taoists. There are five peaks, each with its own attractive details: East Peak is best for the sunrise, the South for the highest altitude, North for its terrace, West for its elegance, and Middle Peak, also known as Jade Lady Peak.

Three different routes lead to the North Peak which is the lowest of the five peaks. The most popular trail is now known as “The Intelligent Take-over Route of Hua Shan,” and was fixed up in 2000 and has the most traditional, historical roots. There is also a cable car line built along this trail, with a second cable car line going up to the West Peak.

From the North Peak, a series of paths rise up more than 984 ft. on the side of the mountain. This was the only trail to go to the four other peaks—Plankwalk in the Sky— and is deemed one of the world’s deadliest hikes.

Here is what I learned hiking the world’s most dangerous trail at Mt. Huashan! The mountain is about 75 miles from Xi’an—catch a high-speed train, normal train, or a bus from Xi’an Railway Station. There are green minibuses that pick you up from the Huashan North Station and drive you to the mountain for free.

One entrance ticket will get you into the peak’s scenic area as well as the Xiyue and Jade Spring Temples. Make sure to travel there in late spring or early fall for the best weather and views!

Hiking the Plankwalk in the Sky

The infamous Plankwalk in the Sky is one of the deadliest trails known to man. Travelers make their way through narrow walkways and crumbling staircases up nearly 7,000 feet to the summit.

This experience is not for the physically challenged or the faint of heart! You are fitted with a safety harness and two carabiners that clip you onto a thin safety wire that runs along the hike. Be prepared for narrow and wobbly paths, squeezing space, and insane heights!

So what exactly makes it dangerous? It isn’t the sheer slopes or the small wooden planks, which are the only things preventing you from falling to a violent death thousands of feet below.

The scariest part is the traffic!

Mt. Huashan is such a popular destination that there will likely be an insane amount of people crossing at the same time as you. You’re forced to keep your balance on a small path that somehow accommodates two-way traffic.

The fun just gets better when excited tourists unclip BOTH their carabiners to get around you quicker—or even when they unclip YOUR carabiners so you can pass them easier (what helpful neighbors!). Whatever you do, the important thing is to remain calm and not be pressured by other hikers.

You can try to avoid the majority of crowds by attempting a night hike. Believe it or not, this is still a popular option for those who want to catch the legendary sunrise from East Peak. 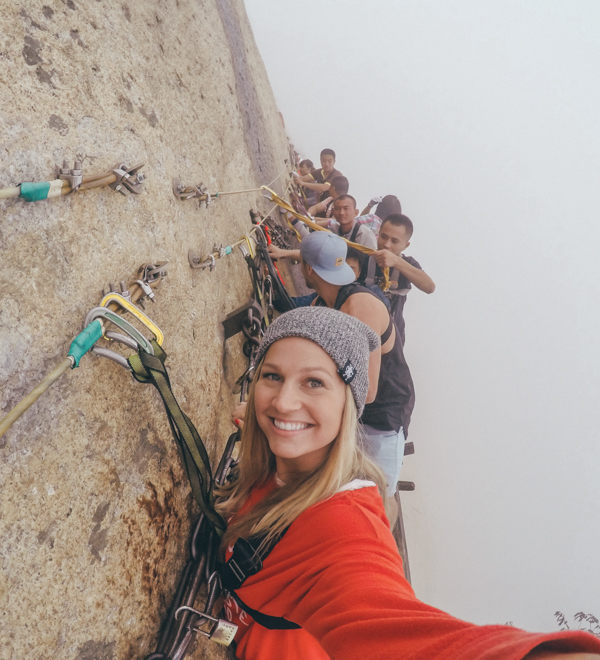 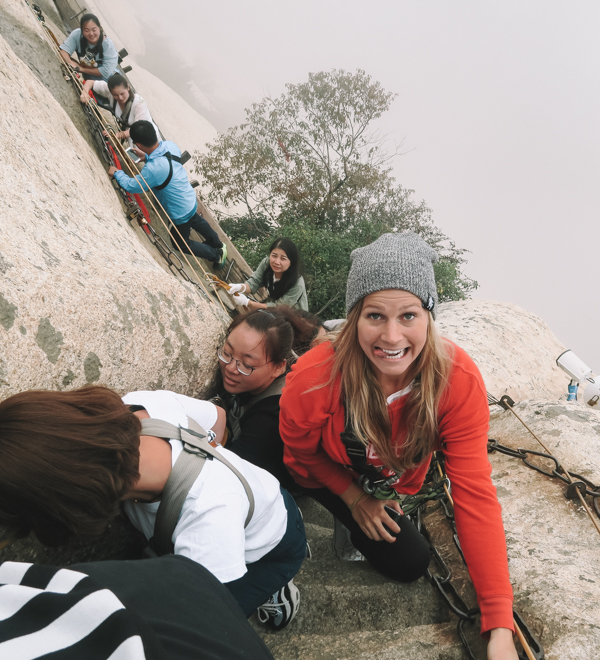 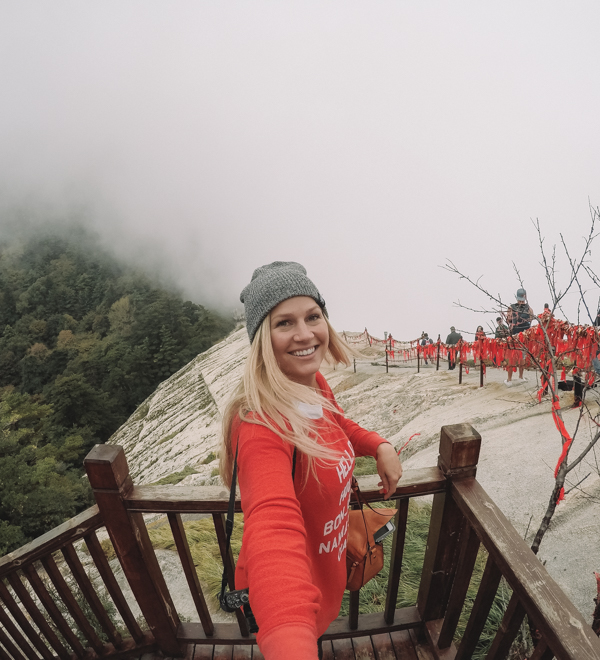 If you don’t fancy a dangerous hike, catch a cable car from Wamiaogou directly to the North Peak (seven to eight minutes). You can also jump on a second car from Donggoukou to West Peak (20 minutes), and hike a simple 30 to 40 minutes to reach South Peak.

A shorter walk from the West Peak will lead you to a small cave—nothing much to see—and have you back in about 30 minutes. Mount Huashan is home to over 20 Taoist temples. Its religious significance make it one of China’s five most sacred mountains.

Once you’ve reached the top of Mount Huashan, you can visit the Yuquan Garden, Dongdao Courtyard and Zhenyue Hall temples. Each is listed as main Taoist temples in China and are some of the most popular temples to visit at the summit.

Mount Huashan is also a beautiful part of China to explore. Give yourself time to explore and soak up all the natural beauty before heading back down! Hiking Mount Huashan was an incredible experience and a highlight of my trip to China! If you have the chance to conquer the mountain, whether it’s by cable car or along the hiking routes, I definitely recommend it!

Do you have any tips for hiking Mount Huashan? Let me know in the comments!